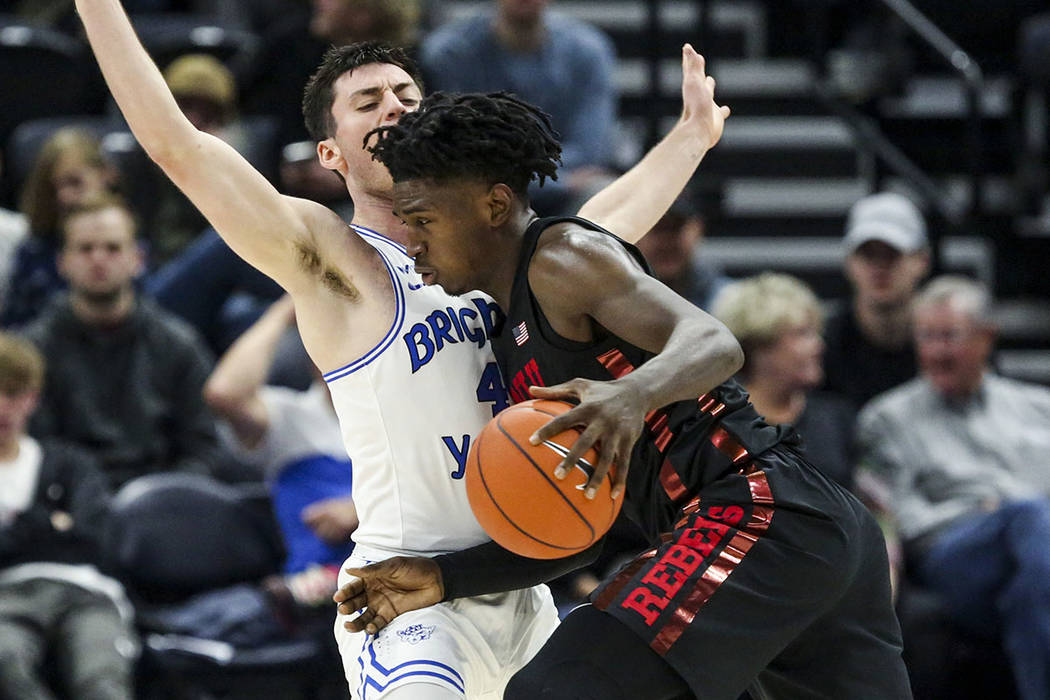 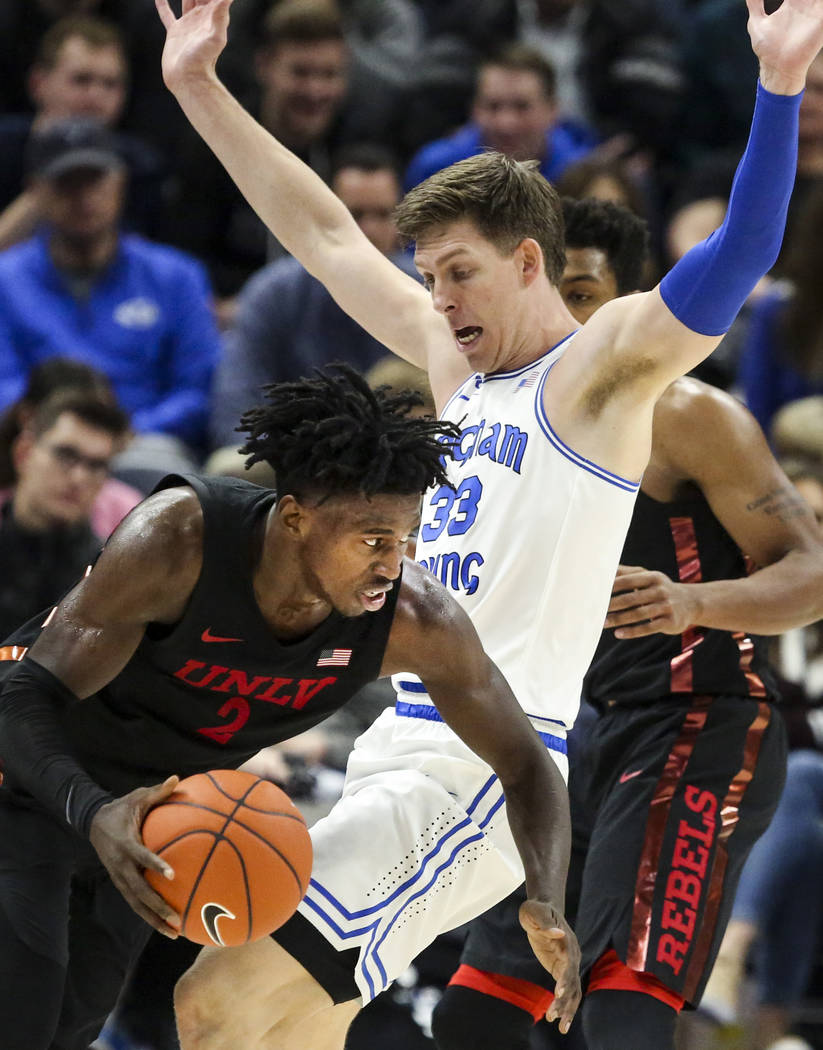 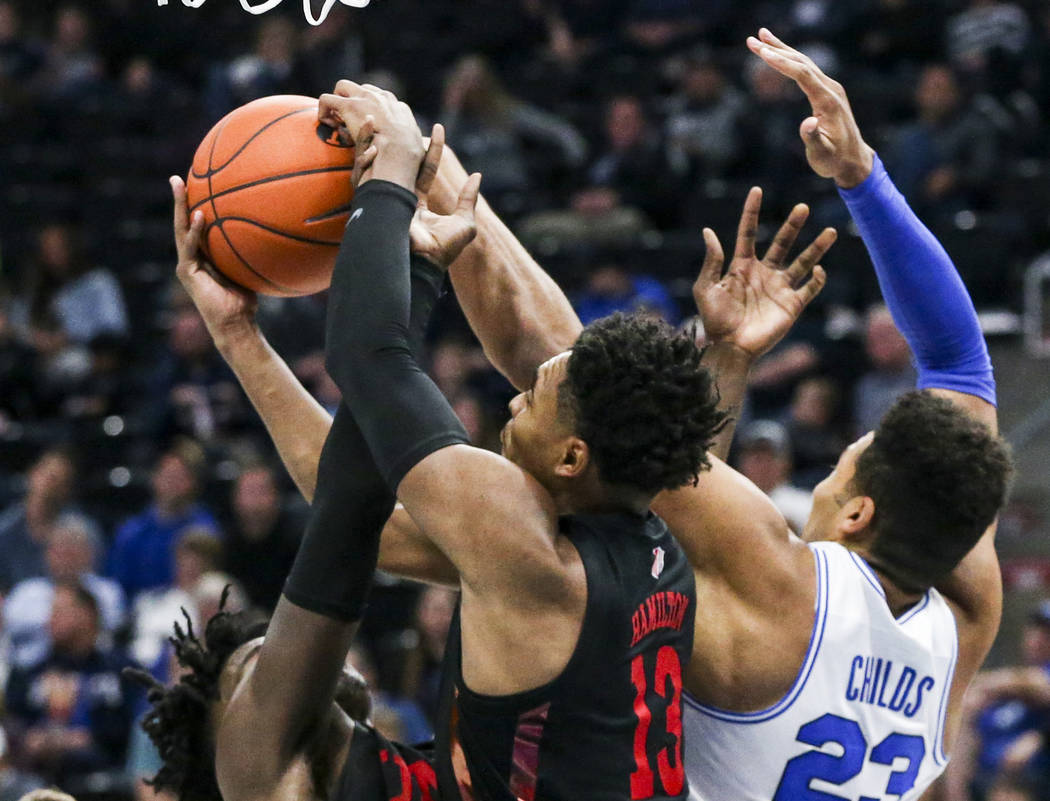 UNLV guard Bryce Hamilton (13) comes down with a rebound against BYU forward Yoeli Childs (23) during the second half of an NCAA college basketball game Saturday, Dec. 7, 2019, in Salt Lake City. (Colter Peterson/Deseret News via AP) 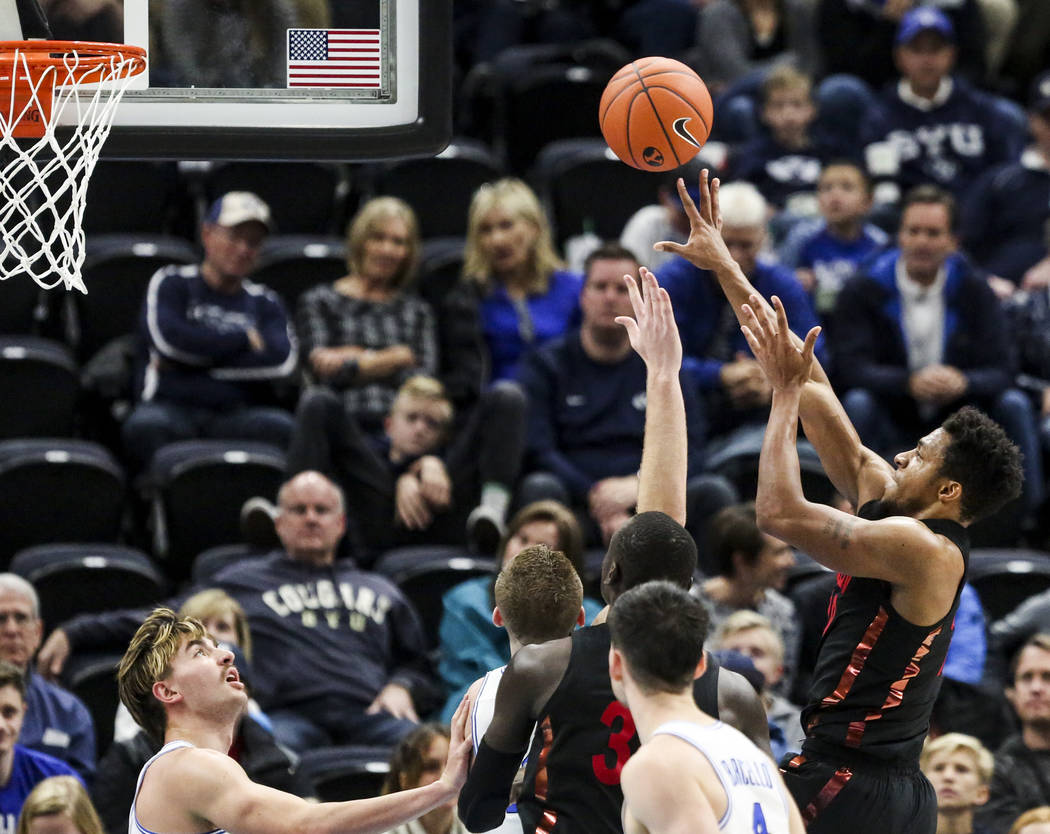 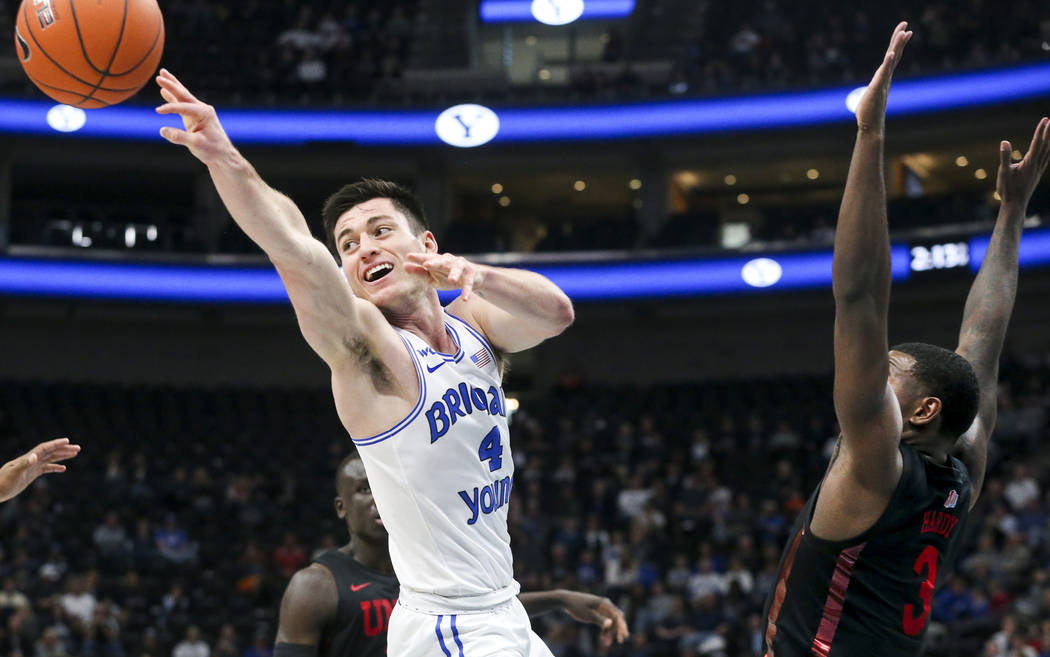 BYU guard Alex Barcello (4) passes to a teammate after being blocked on his shot by UNLV guard Amauri Hardy (3) during the second half of an NCAA college basketball game Saturday, Dec. 7, 2019, in Salt Lake City. (Colter Peterson/Deseret News via AP)

The Rebels then walked into Vivint Smart Home Arena for an early afternoon tipoff and got an ugly wake-up call in losing 83-50, leaving UNLV coach T.J. Otzelberger to say his team wasn’t ready to play.

“With a team like that that has established a culture … if you come out and let them throw the first punch, you can see what can happen,” Blair said. “We came out very flat, and we paid for it.”

Childs scored two points in the first 12 minutes — and the Cougars led 28-15. Three nights earlier at Utah, he scored 29 points in 25 minutes, but got injured late in the game and was questionable for Saturday.

Childs, who either had a severe cramp or a calf strain, took time to round into form against UNLV, but still showed why he is so important to BYU’s hopes of making the NCAA Tournament by finishing with 13 points and 14 rebounds.

Cougars coach Mark Pope could have opted to sit Childs, and it would have mattered little to the outcome. That speaks far more as to where UNLV stands than BYU.

2. Little defense for the Rebels

It’s true that it’s tough to shoot 70 percent from 3-point range even unguarded, which the Cougars almost did in the first half in building a 46-25 lead, but the lack of energy Otzelberger and Blair referenced showed up mostly on the defensive end.

The Cougars zipped passes around in the halfcourt until a shooter almost invariably came open, and they pushed the pace when given the chance to get into transition. They shot 54.7 percent for the game, including 51.9 percent on 3-pointers.

BYU was “not guarding certain guys, we’re not getting good offensive possessions, and they’re flying it at us,” Otzelberger said. “And then in the halfcourt, their pace was really good, and we couldn’t do anything about it because we were always a step behind.”

After playing three straight on the road, the Rebels will take time off and prepare for a five-game home stretch that begins Dec. 18 against Pacific at the Thomas & Mack Center.

“Right now, I would rather have all the practice time we can get,” Otzelberger said. “I’d rather not play for about a month. I love practice because that develops habits. We certainly don’t have the habits we need right now. We had signs of them on Wednesday. Maybe we felt like we arrived. But we will get those habits starting on Monday.”