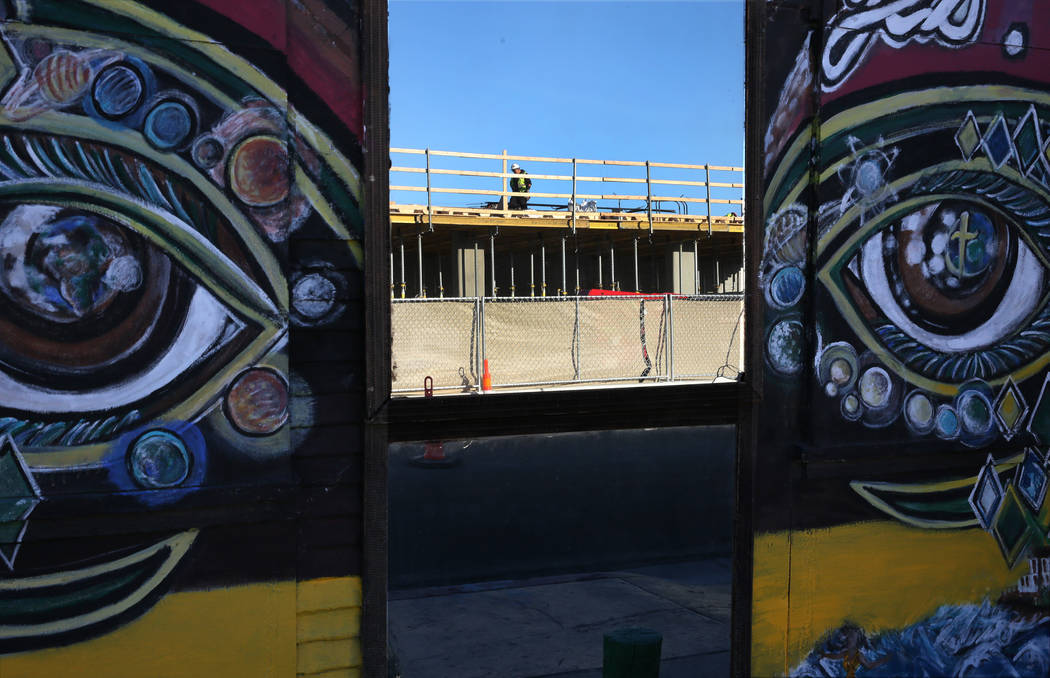 The construction site of an apartment complex is reflected through the glass door at the southwest corner of Casino Center Boulevard and Colorado Avenue in downtown Las Vegas photographed on Thursday, Oct. 24, 2019, in Las Vegas. (Bizuayehu Tesfaye/Las Vegas Review-Journal) @bizutesfaye 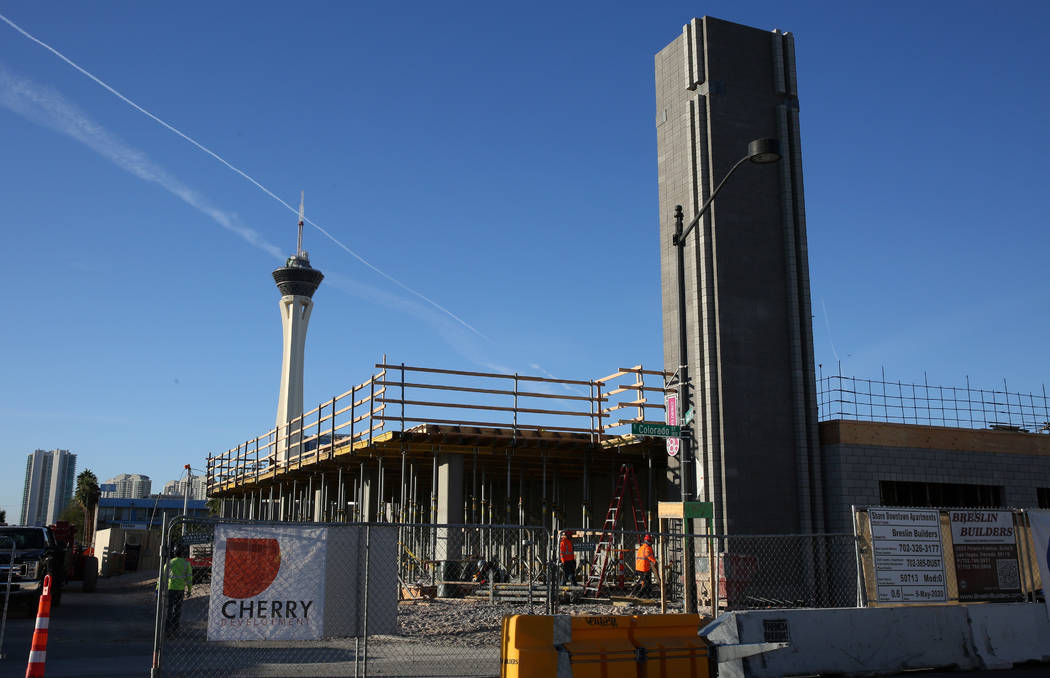 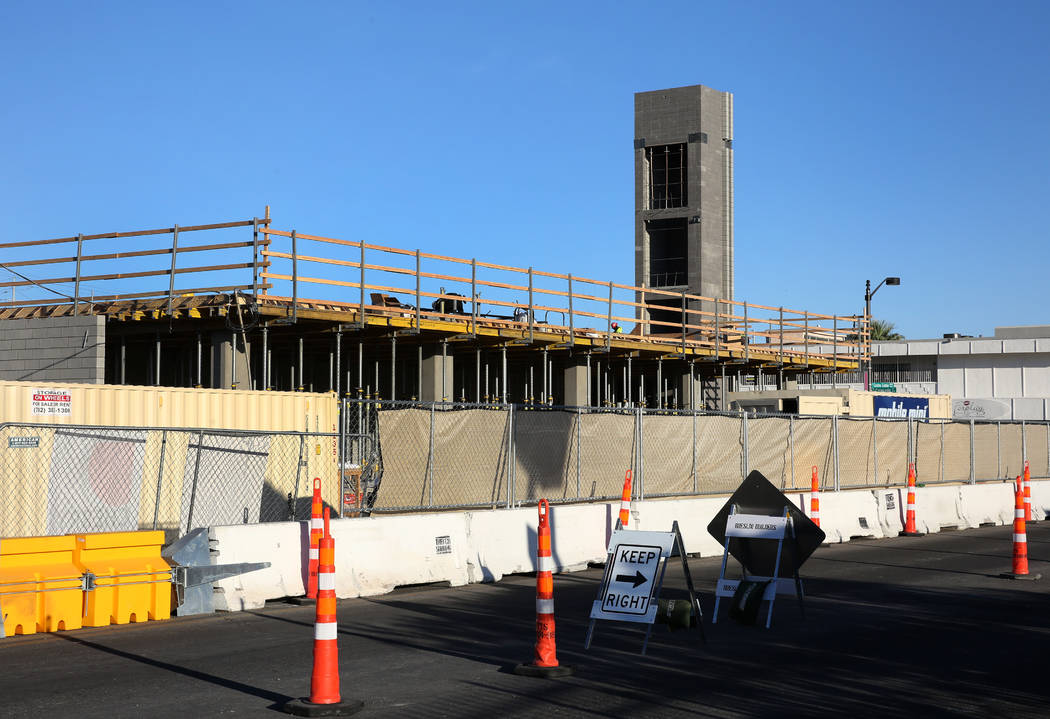 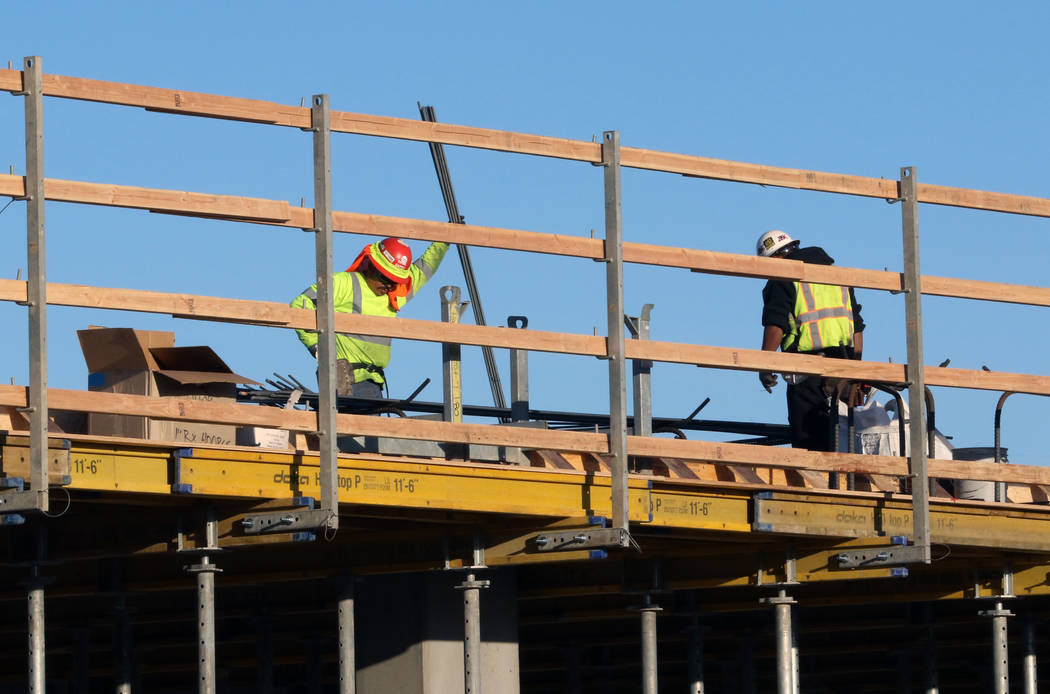 Construction workers at the site of an apartment complex at the southwest corner of Casino Center Boulevard and Colorado Avenue in downtown Las Vegas photographed on Thursday, Oct. 24, 2019, in Las Vegas. (Bizuayehu Tesfaye/Las Vegas Review-Journal) @bizutesfaye

When developer Sam Cherry built his last residential projects in Las Vegas, the housing market was a bit different than today.

It was the mid-2000s bubble. Fueled by easy money, property values soared, builders sold tens of thousands of homes a year, house flippers went wild, and streams of investors, Cherry among them, drew up so many plans for condo towers that the craze was called the “Manhattanization” of Las Vegas.

Cherry is now building his first residential complex since the boom days — though it’s a lot smaller than the high-rises he put up back then.

His company is holding a media event Tuesday to debut its plans for the rental property, which has been on the drawing board for a decade and, before Cherry got involved, was the site of a proposed 43-story condo tower during the bubble years.

The apartments at shareDOWNTOWN will be small — just 480 square feet each — and are expected to rent for $1,100 to $1,300 per month, Cherry said. They will feature high-end finishes, he added, and the building will include a Zen room, a gym and ground-floor retail.

He expects to finish the $11 million project in May 2020 and is looking to build others.

Apartment developers have been on a building spree in Southern Nevada in recent years. Most projects have been in suburban areas such as the southwest valley and Henderson, with a small but growing tally in Las Vegas’ core.

Construction costs are typically higher in Las Vegas’ urban areas than in the suburbs. It also can be harder to obtain financing for those projects, and it’s not always clear that developers can land high-enough rents to make a complex work financially, real estate pros have said.

Not helping things downtown are the vagrants, boarded-up buildings and vacant lots scattered about that, collectively, might scare off prospective tenants.

But Cherry, who said he has lived in the Arts District for years, pointed to the area’s restaurants, bars, galleries and antique stores.

When people visit spots such as Italian restaurant Esther’s Kitchen, Vesta Coffee Roasters, and Latin eatery and coffee bar Makers &Finders, they see a sense of community and “understand which way the neighborhood is going,” he said.

Also, in a sign of demand downtown, Fremont9, the area’s biggest new rental complex in years, opened in 2018 and is 96 percent occupied, according to a spokeswoman for Zappos chief Tony Hsieh’s DTP Companies, which partnered on the five-story, 232-unit complex with Arizona developer The Wolff Co.

During the bubble days, Cherry built two condo towers downtown:the 16-story Soho Lofts and the 22-story Newport Lofts. He also drew up plans for the 65-story Stanhi but never built it and sold the property, now home to Eclipse Theaters, after the economy crashed.

He received City Council approval in 2009 for a four-story apartment complex at his current project site. But the economy only got worse, and he shelved the plans.

He wasn’t the first developer to look at the property. City records show plans in 2006 for a condo tower there, though like most high-rise proposals from those days, it was never built.

Back then, Cherry said, would-be developers were pitching plans “every day” for residential towers.

“Everyone thought they could build a high-rise,” he said.