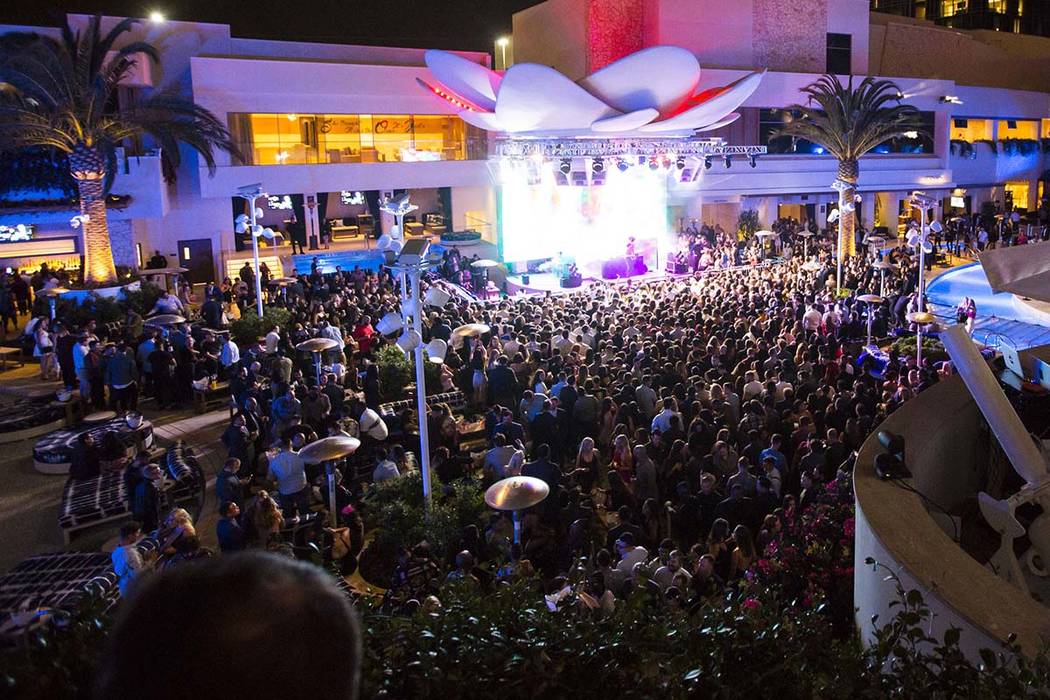 Attendees dance to Saint Jhn around the outdoor area the during the grand opening weekend of Kaos, the new dayclub and nightclub at the Palms, in Las Vegas on Friday, April 5, 2019. (Chase Stevens/Las Vegas Review-Journal) @csstevensphoto

Just seven months after the Palms celebrated the grand opening of Kaos dayclub and nightclub, Red Rock Resorts is shutting it down, effective immediately.

The decision to ax the crown jewel of the Palms’ $690 million renovation project was made after the company reported a net loss of $26.8 million in the third quarter, down $51.9 million from the same period last year.

“It’s obvious that the nightclub environment in Vegas is extremely competitive. It doesn’t appear that the market has grown enough for the amount of supply in the market,” said Red Rock CEO Frank Fertitta III during a Tuesday call to investors. “The cost of entertainment is excessively high, and we just made the decision to focus where the fish are and acknowledge that the nightclub business, at least at the Palms, was not working for us.”

Red Rock spokesman Michael Britt said the company is going to take time to reassess the programming and use of the Kaos venues going forward.

In the meantime, the space will be used for special events, private meeting space and everyday resort pool operations.

“While Palms has experienced exceptional growth across both the gaming and nongaming segments of the business, the expense side of the business has been challenging to date, due in large part to the entertainment and fixed cost structure associated with KAOS,” Britt said in a Tuesday statement.

Both the dayclub and nightclub shut down for six weeks, beginning in September, to construct a 70-foot dome that covers 33,000 square feet of space.

It doesn’t appear to have been missed much over that time span. Cootey said Red Rock saw “no degradation in any of the lines of business at the Palms” over the weeks.

While the Palm sees an increase in business at the gaming floor and restaurants while the Palms’ Pearl Theater is in use, Fertitta said the same did not hold true for Kaos.

“We did not see that correlation with the nightclub,” Fertitta said. “One could even make the case that it may have had a negative impact to the core gaming customer on the property.”

The venue had been hinting at a major change-up over the past few months.

In September, it was reported that Marshmello was no longer listed as a resident headliner at the club.

The DJ was reported to have been released from a two-year, $60 million contract. The next month, Jon Gray left his post as the Palms’ general manager.

Red Rock said the company’s net income loss was primarily because of “one-time charges relating to the termination of certain artist performance agreements and employment arrangements at the Palms, as well as higher depreciation and amortization relating to the Palms redevelopment project,” according to a Tuesday news release.

Overall, the Palms generated a cash flow loss of around $10 million in the third quarter, lower than analyst expectations.

Cootey said the company’s performance the past three months had solid results, aside from the Palms. When excluding the property, the company’s net revenue rose 3.6 percent.

“Results continue to be solid and demonstrate the ongoing core strength of our business,” he said.

J.P. Morgan gaming analyst Joseph Greff noted that by excluding the unprofitable Kaos, cash flow would have been positive in the third quarter.

The club’s implied revenue in the third quarter was $18.6 million, but generated a loss of $13.5 million in adjusted cash flow.

“We see a relatively solid core (Las Vegas locals market) and fewer drags at Palms, which has been a difficult chapter for shareholders, and, frankly, a costly investment,” Greff said in a Tuesday note.

Red Rock remains bullish on the Palms’ future performance, especially now that it had completed its renovation project.

Cootey said that it does well attracting in both locals and visitors and Red Rock expects the Palms to “generate significant returns for the company over time.”