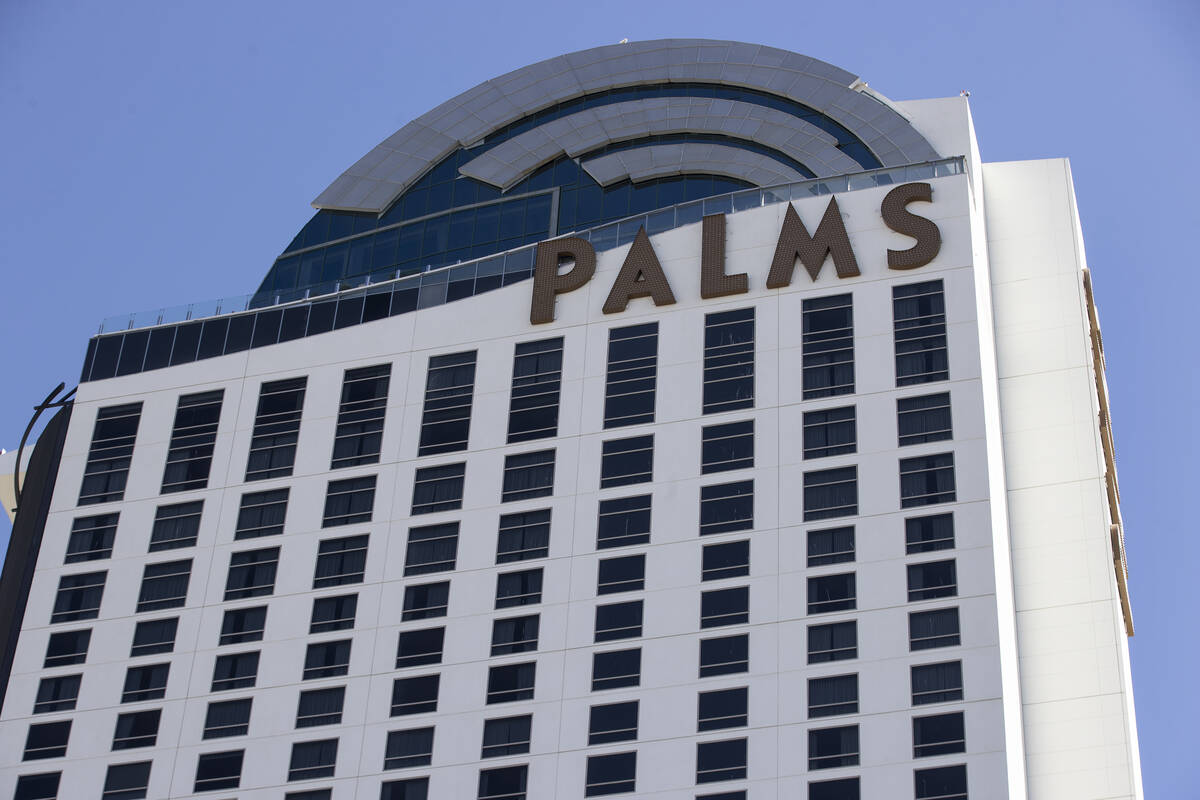 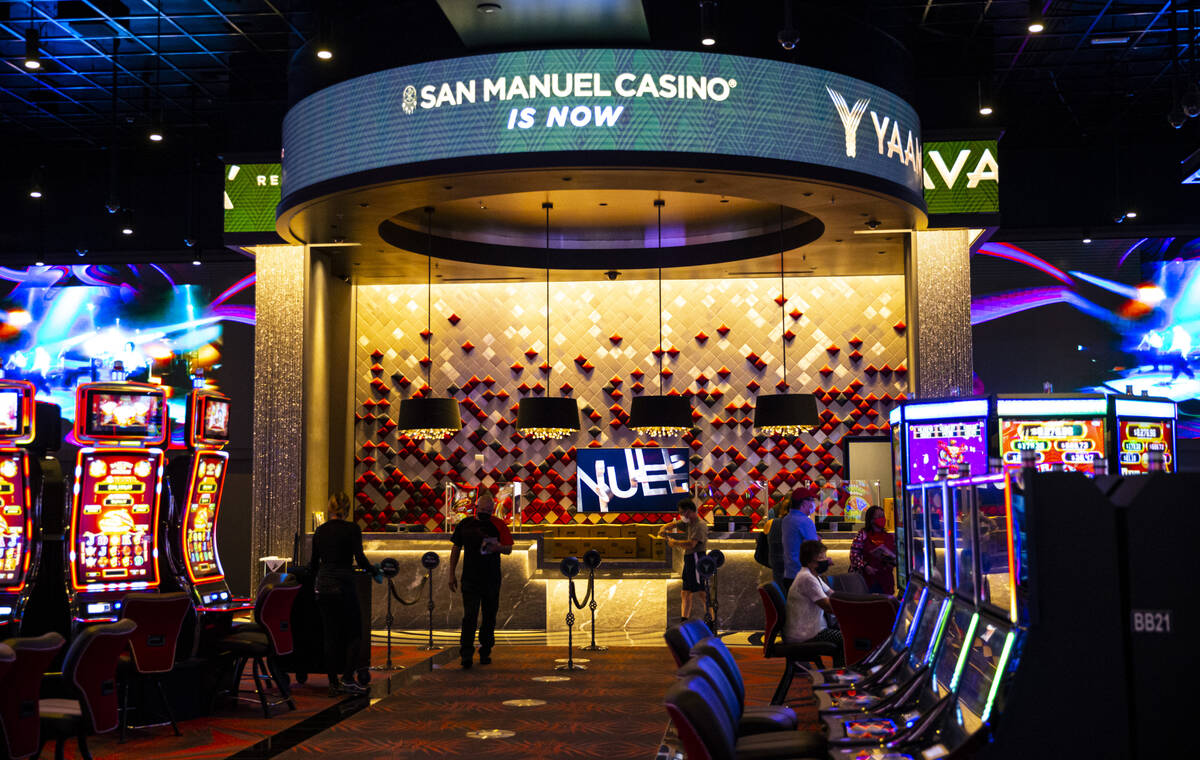 People walk on one of the casino floors during a tour of the Yaamava' Resort & Casino, formerly the San Manuel Casino, in Highland, Calif., on Thursday, Sept. 30, 2021. The San Manuel Band of Mission Indians is in the process of buying the Palms, with the deal expected to close later this year. (Chase Stevens/Las Vegas Review-Journal) @csstevensphoto 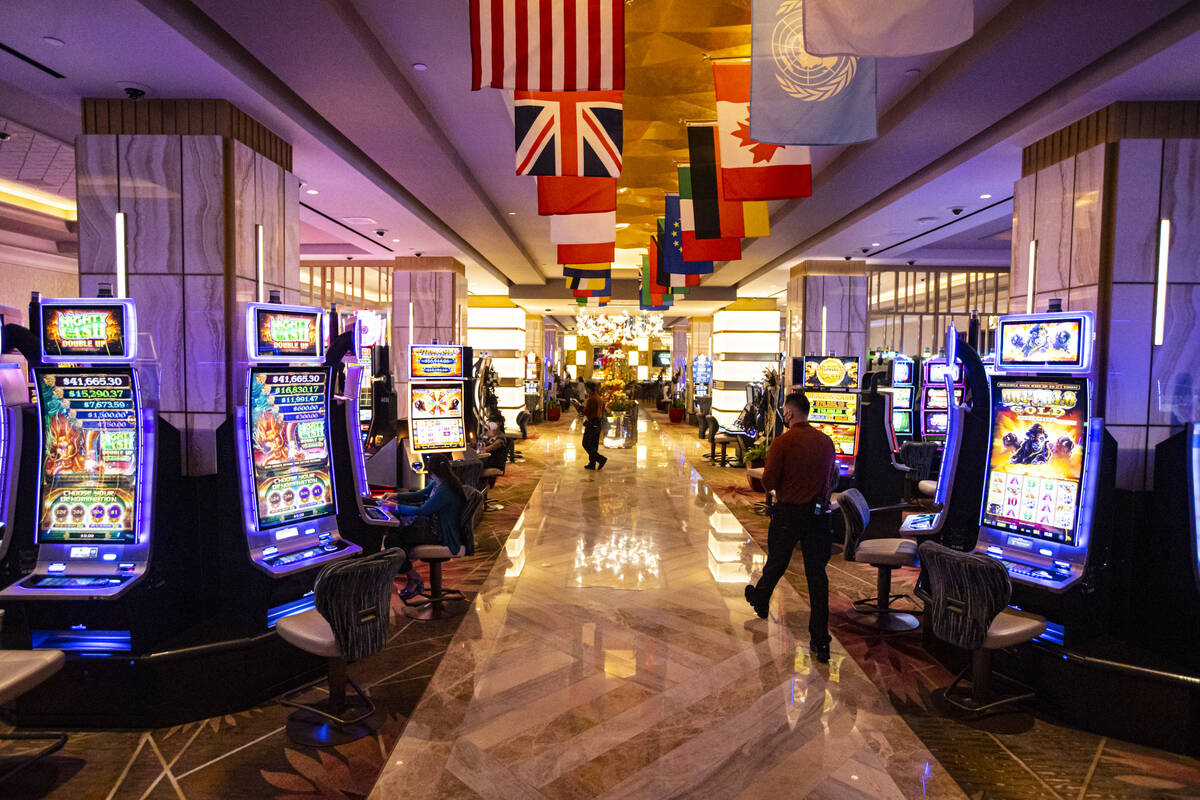 A view of the high limit slot room, one of five high limit gaming areas, is seen during a tour of the Yaamava' Resort & Casino, formerly the San Manuel Casino, in Highland, Calif., on Thursday, Sept. 30, 2021. The San Manuel Band of Mission Indians is in the process of buying the Palms, with the deal expected to close later this year. (Chase Stevens/Las Vegas Review-Journal) @csstevensphoto 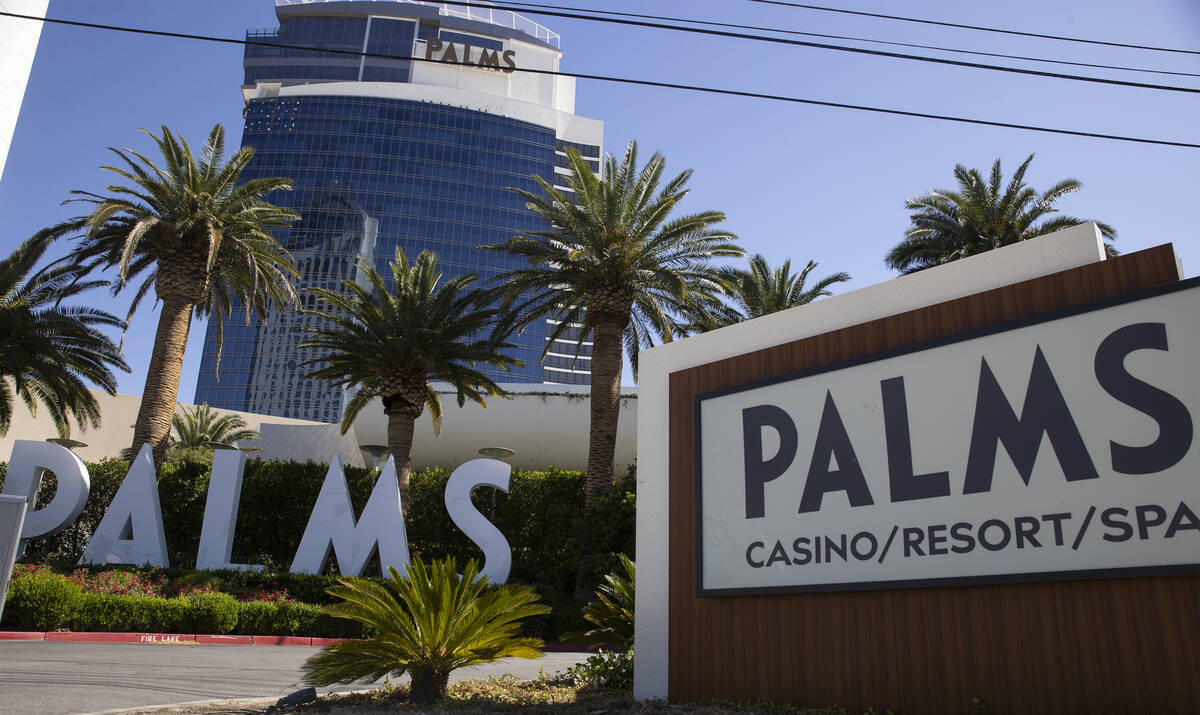 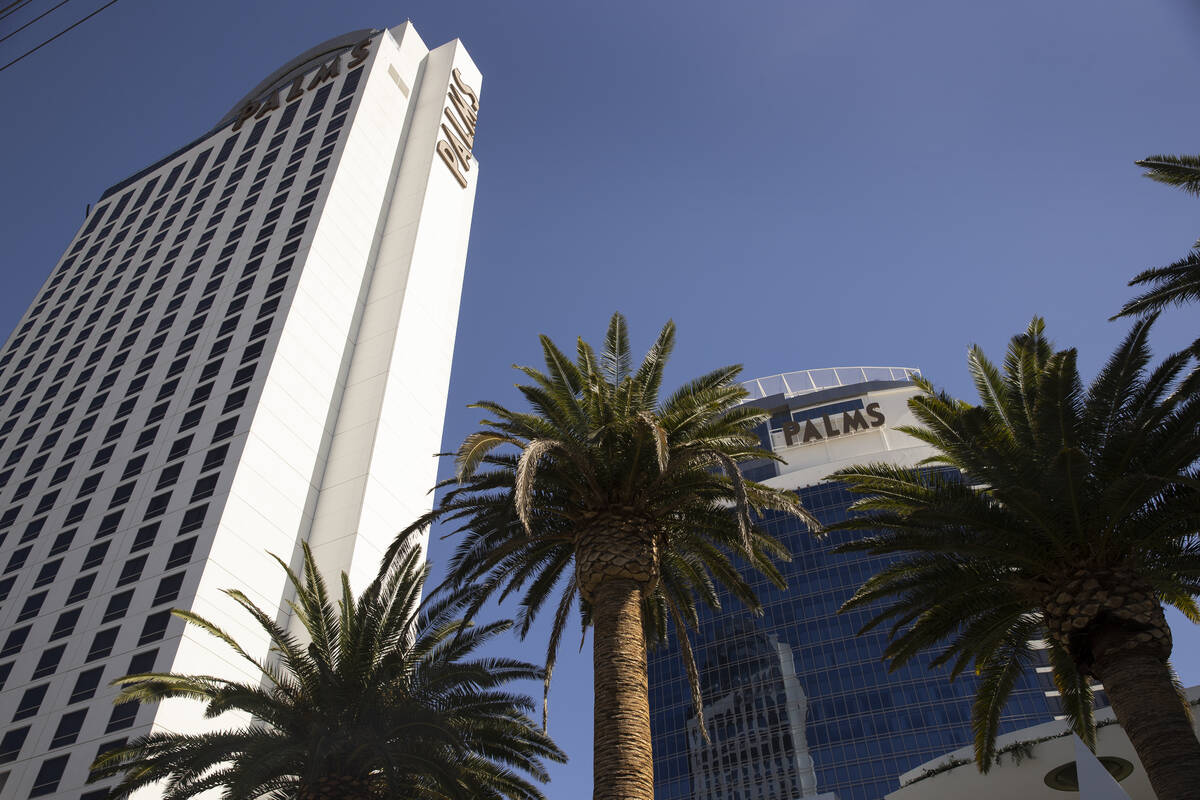 HIGHLAND, Calif. — The Palms’ soon-to-be owners are ready to get to work.

Several months after announcing a $650-million deal to buy the Palms from Red Rock Resorts, the San Manuel Band of Mission Indians shared details for the first time publicly about its plans to reshape and reopen the off-Strip resort.

San Manuel is targeting the first half of 2022 to reopen the Palms for the first time since the COVID-19 shutdown last spring, and the tribe has plans to run the property with a focus on gaming and Las Vegas locals. The San Manuel Gaming and Hospitality Authority, a subsidiary of the tribe, must receive gaming regulatory approval before it can own and operate the hotel-casino. Upon approval, which the authority hopes will come in November or December, San Manuel can begin working.

The Palms will be the tribe’s first hotel-casino beyond its flagship Yaamava’ Resort and Casino, formerly known as San Manuel Casino, in Southern California.

The tribe had considered entering the Las Vegas market for the past two or three years in a quest to diversify its revenue sources. Now, on the cusp of realizing one of its goals, San Manuel is banking on its employee- and guest-centric business philosophy to set it apart.

“San Manuel is a successful casino operator who brings values and principles to the communities we serve,” San Manuel Band of Mission Indians Chairman Ken Ramirez said in a written statement. “If you want to do business with us, you always find us to be a willing partner, one who works every day to be the best in all we do. We want to set a higher standard for Tribal governments, gaming operations, hospitality and philanthropy.”

Ready to get to work

The resort name may change “down the road” to something like the Palms, by San Manuel, but it will reopen as the Palms, Gaming and Hospitality Authority management committee member Laurens Vosloo told the Review-Journal during a Sept. 30 tour of Yaamava’.

Vosloo said guests will notice some, but not many, changes when the Palms opens its doors under new management. Red Rock Resorts reduced the potential construction workload when it pumped $690 million into renovating the Palms and held a reopening in April 2019, he said.

The tribe’s hospitality authority is mulling over food options, Vosloo said. Most of the food court vendors will stay. “Maybe (with) one or two, we’ll take a look and see if we can do something fresh and new and different over there,” he said.

Vosloo said the “dated” sportsbook will likely get an update and change in size; it currently occupies a big space the tribe thinks could be reapportioned for other uses.

The rooftop pool complex will open with the property. The former nightclub Kaos will remain closed while the authority decides what will replace it. Viewed at the time as the renovated property’s pièce de résistance, Kaos nightclub, closed Nov. 5, 2019, just seven months after its ballyhooed opening. Vosloo called Kaos an “unbelievable” venue but one that wouldn’t make sense for their target customers.

San Manuel’s initial priority project will be behind the scenes. The hospitality authority plans to upgrade the employee experience “from when you park all the way going through the back of the house” with lockers, facilities and an employee dining room, Vosloo said.

San Manuel has lined up construction and design companies ready to get going once the tribe gets the keys to the building. He said the tribe wants to make the Palms a place where people enjoy coming to work.

“It’s not just always about making money, right?” Vosloo said. “It’s about taking care of the people that help them get there.”

San Manuel also is building out its leadership team at the Palms. Vosloo said he was excited about the recent hire of former New York-New York president and chief operating officer Cynthia Kiser Murphey to be the general manager.

Vosloo said her knowledge of Las Vegas and what excites locals makes her a good fit in San Manuel’s culture.

Like Yaamava’ Resort and Casino, the Palms will primarily cater to gamblers. Other amenities contribute but are not the moneymakers, Yaamava’ general manager Peter Arceo said during the Sept. 30 tour.

San Manuel plans to attract Las Vegas locals as well as its existing Yaamava’ customer base out of Southern Nevada, Vosloo said, noting that locals have a soft spot for the Palms.

“Those are the big rocks,” he said of local customers, “and then the pebbles will be all the tourists and some people from out of town,” Vosloo said.

The goal is to effectively turn the Palms into the Las Vegas locals’ Strip casino: give locals the atmosphere, food and entertainment of a Strip resort without what Vosloo deemed the “craziness” of Las Vegas Boulevard.

“We think we’ve got something different and special that the locals will like,” Vosloo said.

Las Vegas is about a four-hour drive from Yaamava’ in Highland, California, and many of the resort’s guests already visit Las Vegas. The tribe has built a large customer database since first opening a bingo hall in 1986. It’s a matter of giving them reasons to stay at the Palms when they do, perhaps through promotions, offers or other incentives.

Vosloo said the tribe wants to prioritize customer convenience and would explore ways for customers who’ve built up rewards points at Yaamava’ to spend them at the Palms.

“I love Vegas,” Nutter said while sitting at a Yaamava’ slot machine on a busy Thursday last month, “and this is my little getaway from saving the drive for Vegas.”

Nutter typically stays at whichever resort offers her a free room, she said. Lately, that’s been Luxor. The Plaza is a favorite when she stays downtown.

She said she’d never been to the Palms and didn’t know where it was. Nutter said she would consider playing at the Palms if the hotel comped her.

Linda Padgett played the slots on the second floor near a high-ceiling water feature flanking a set of escalators. The 61-year-old Agua Dulce, California, resident frequently visits Las Vegas to see her daughter, she said. Like Nutter, Padgett has a simple standard for the Palms to earn her visit: “If they give us free parking.”

Vosloo confirmed parking will indeed be free (and the 13-foot tiger shark art piece is staying). They’re a couple of the little things that add up to a positive guest experience, and San Manuel won’t take its customers for granted, he said.

“Everybody’s got a building and slot machines,” Vosloo said. “It’s how you treat them, how you interact with them, how you make them feel. That’s what’s gonna make a difference for us.”