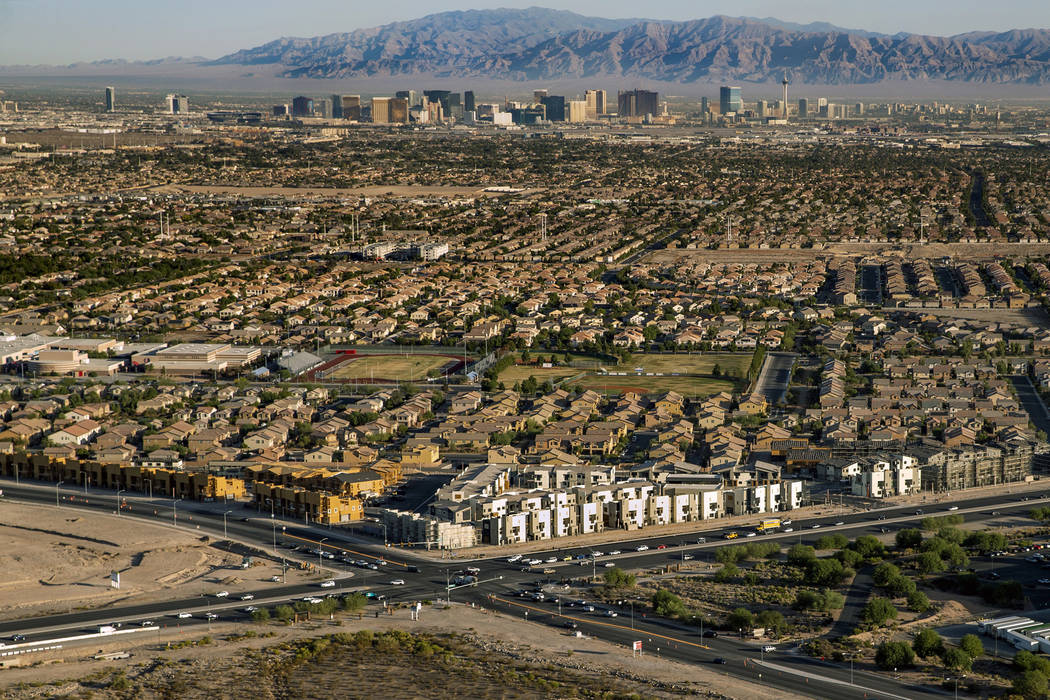 Less developed land along St. Rose Parkway with some developed across it on Wednesday, Oct. 16, 2019, in Las Vegas. (L.E. Baskow/Las Vegas Review-Journal) @Left_Eye_Images 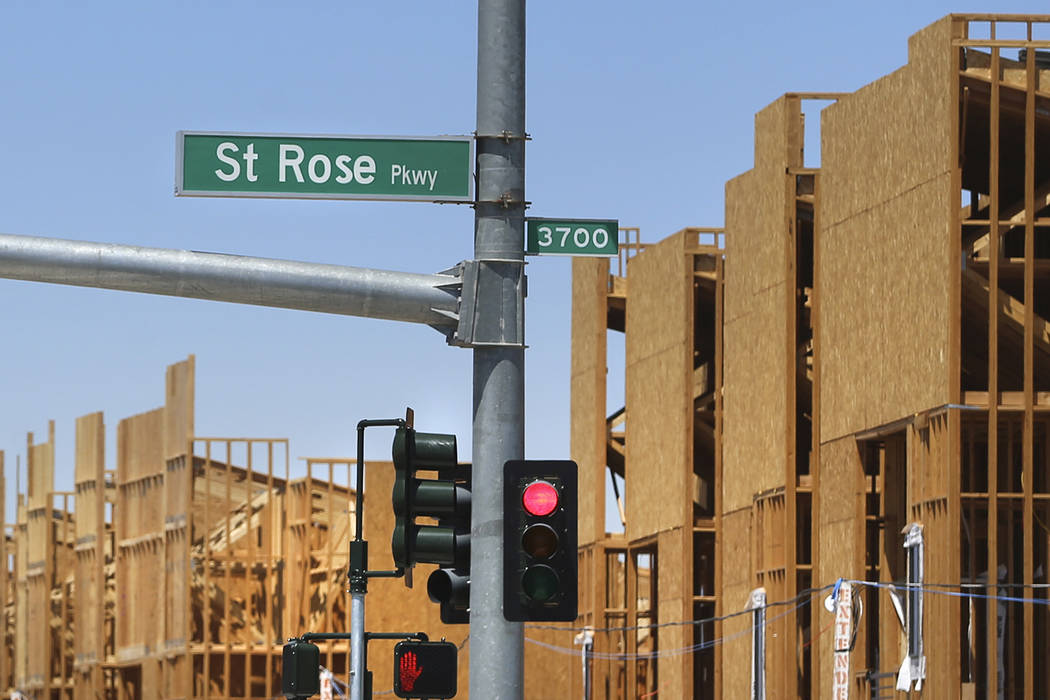 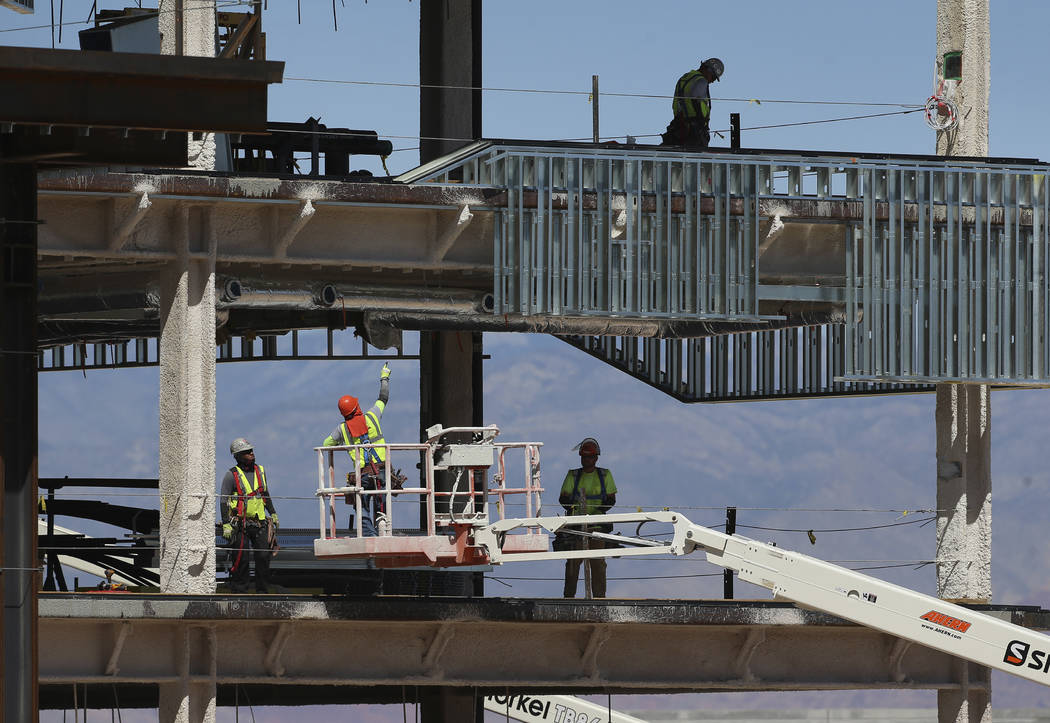 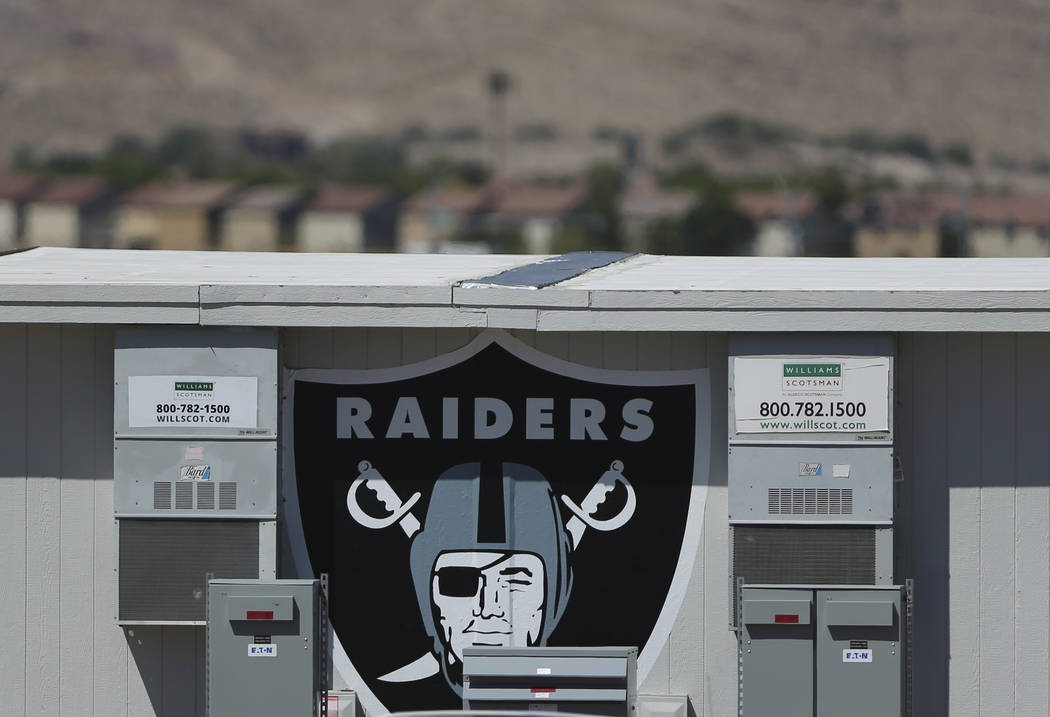 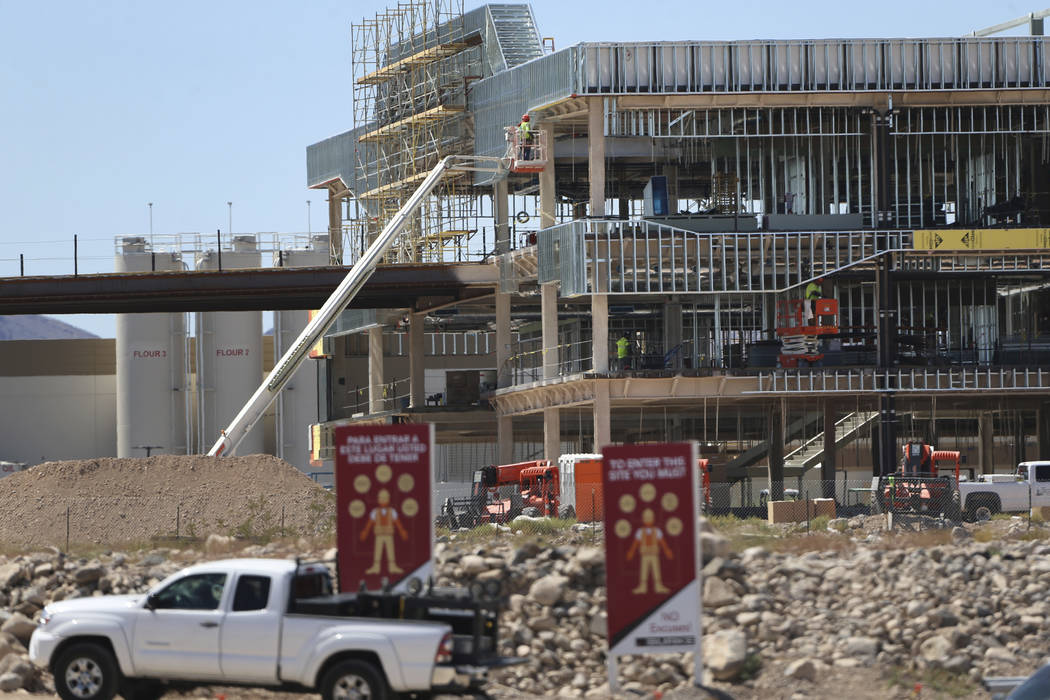 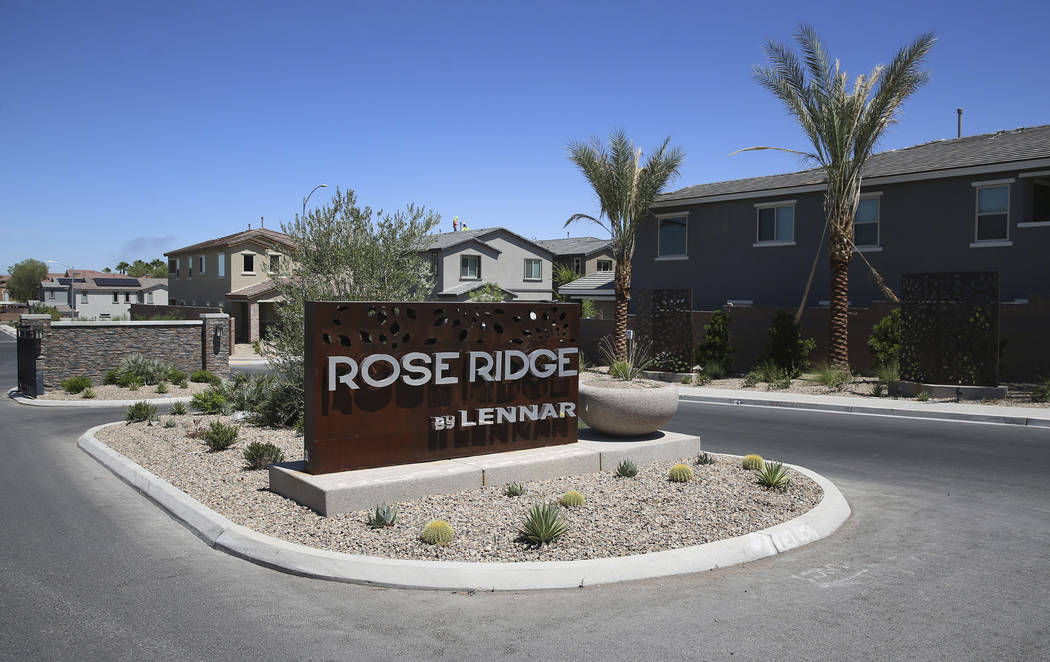 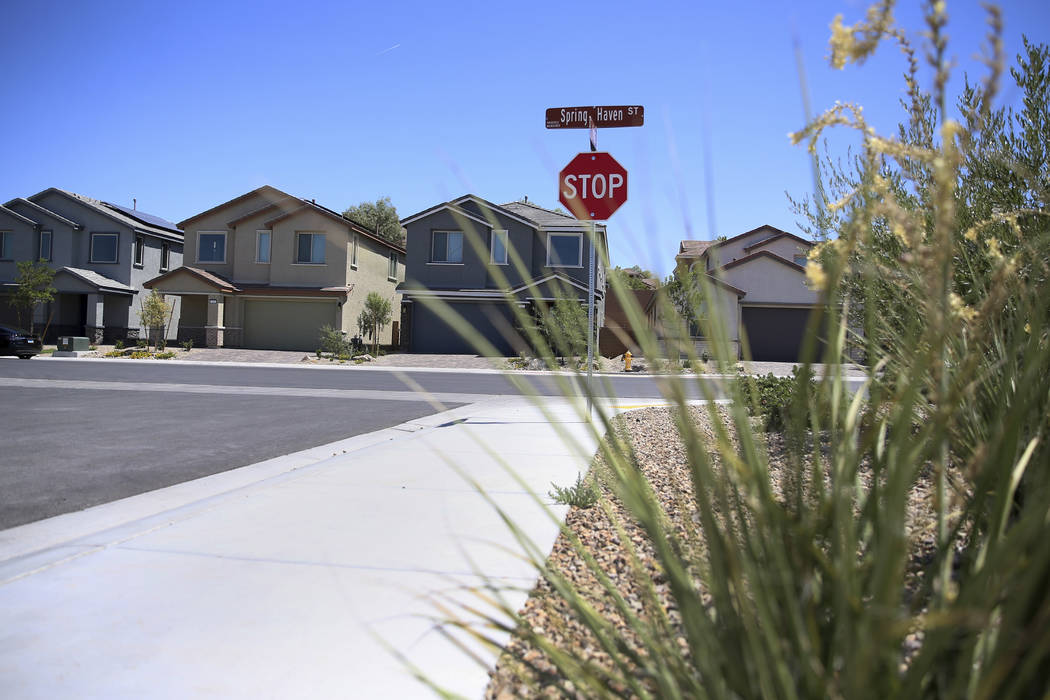 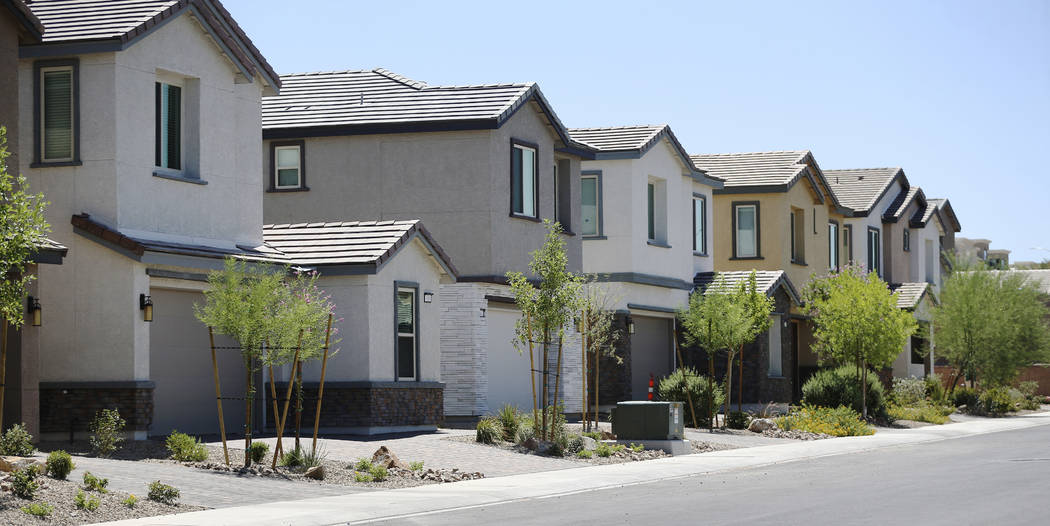 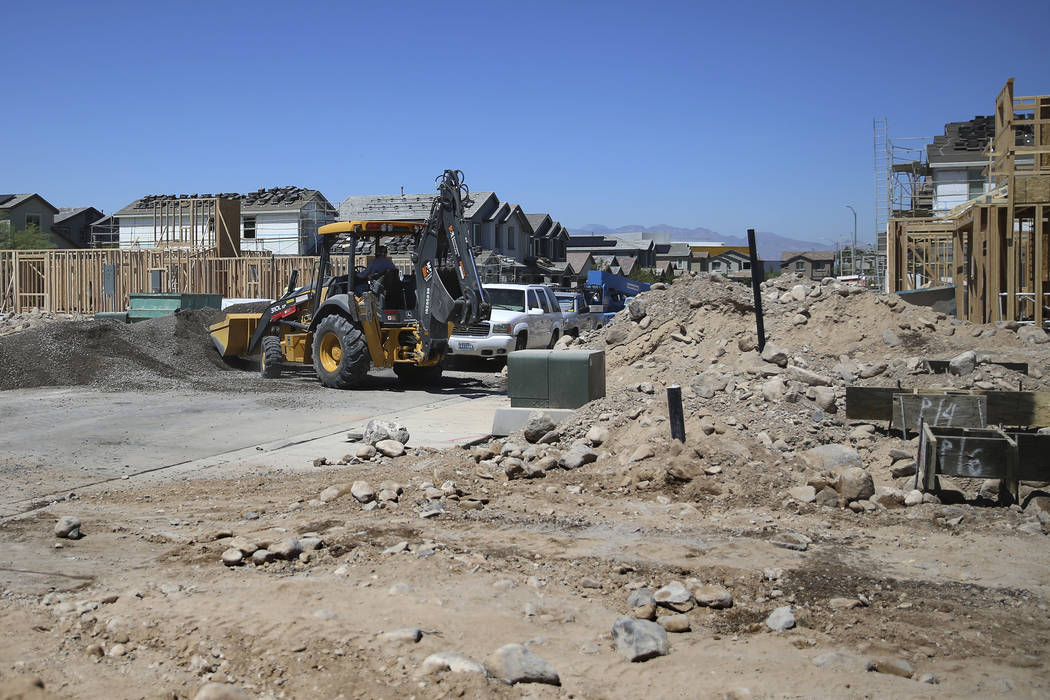 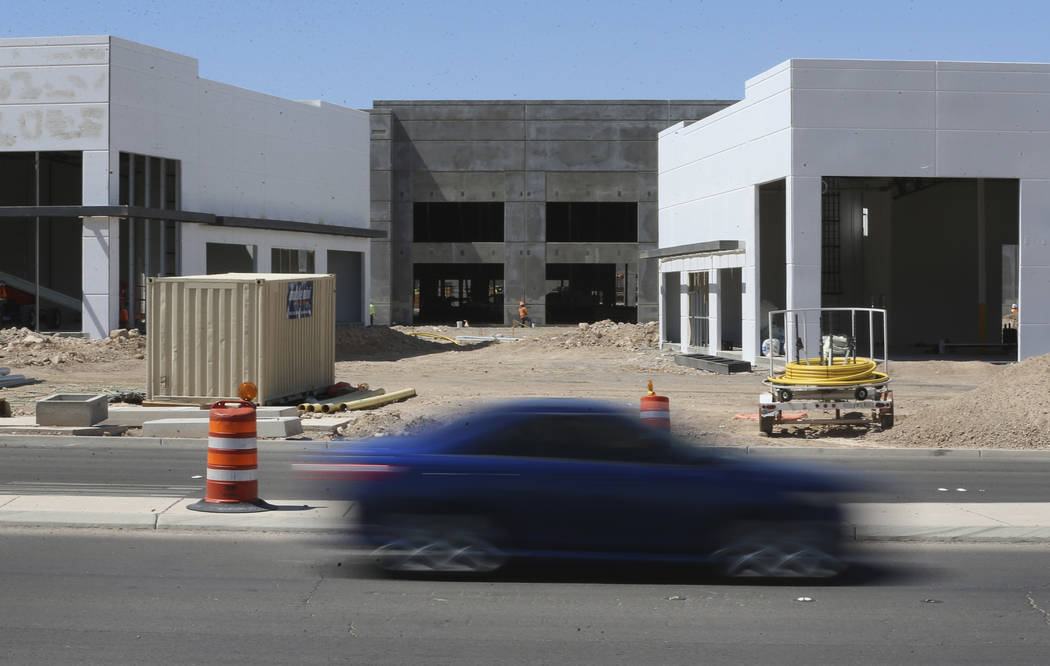 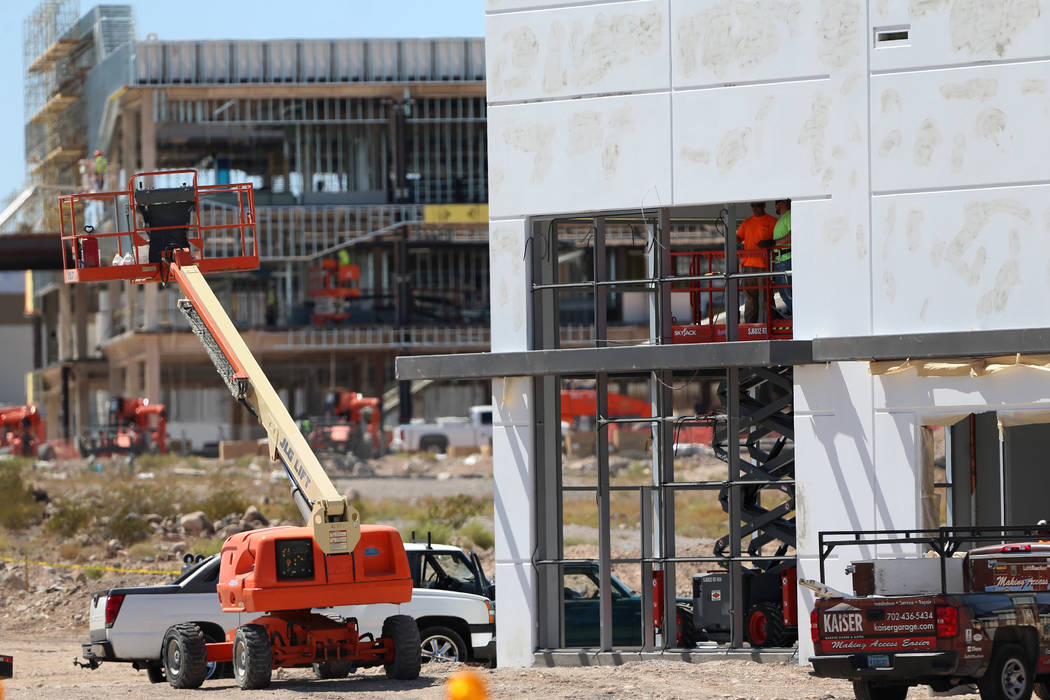 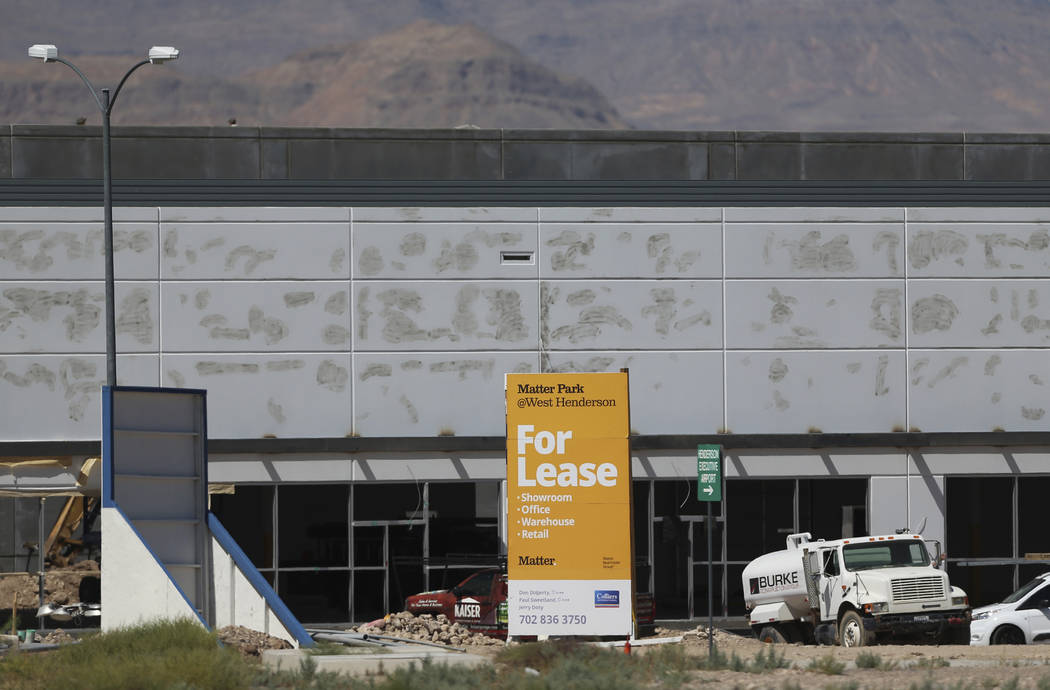 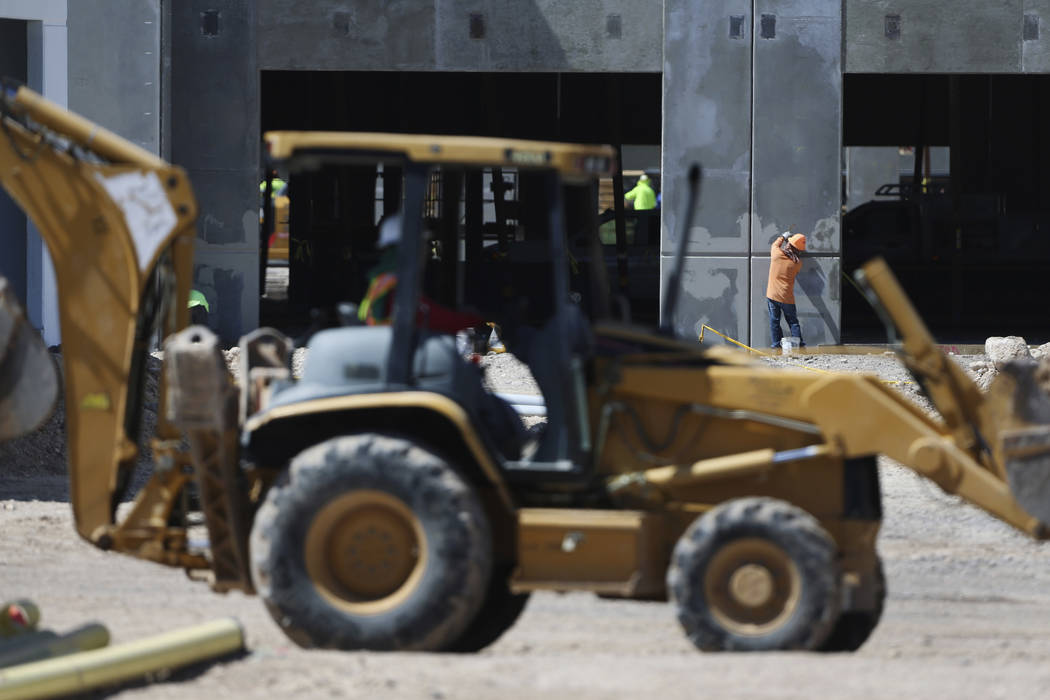 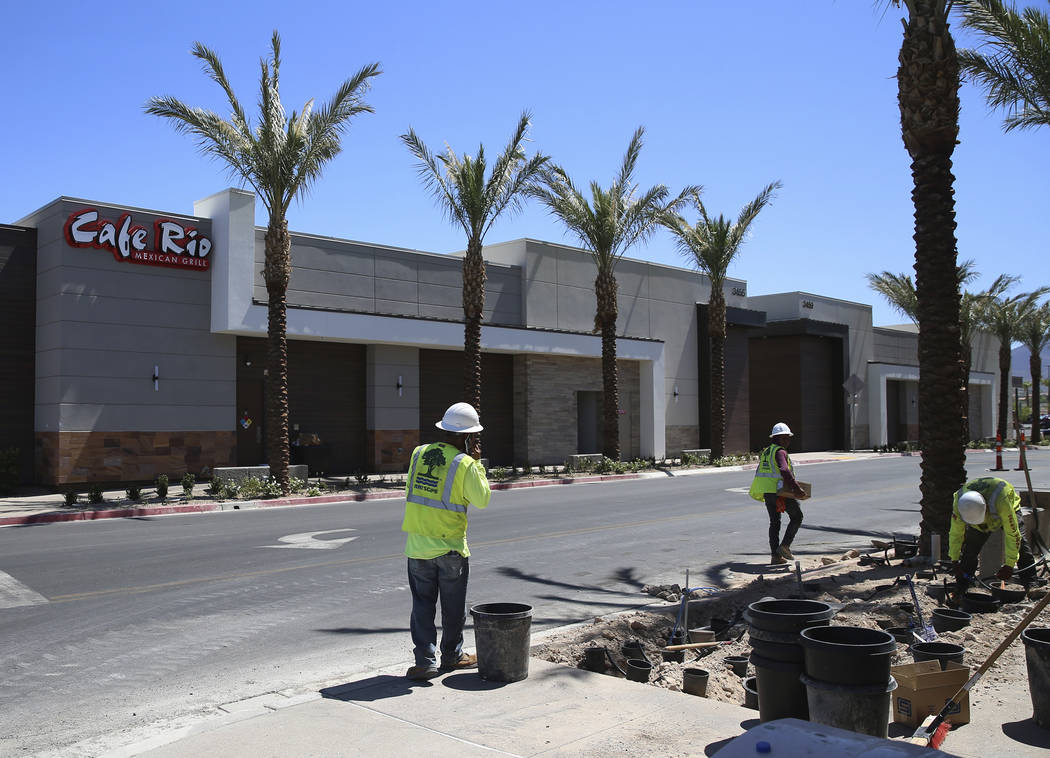 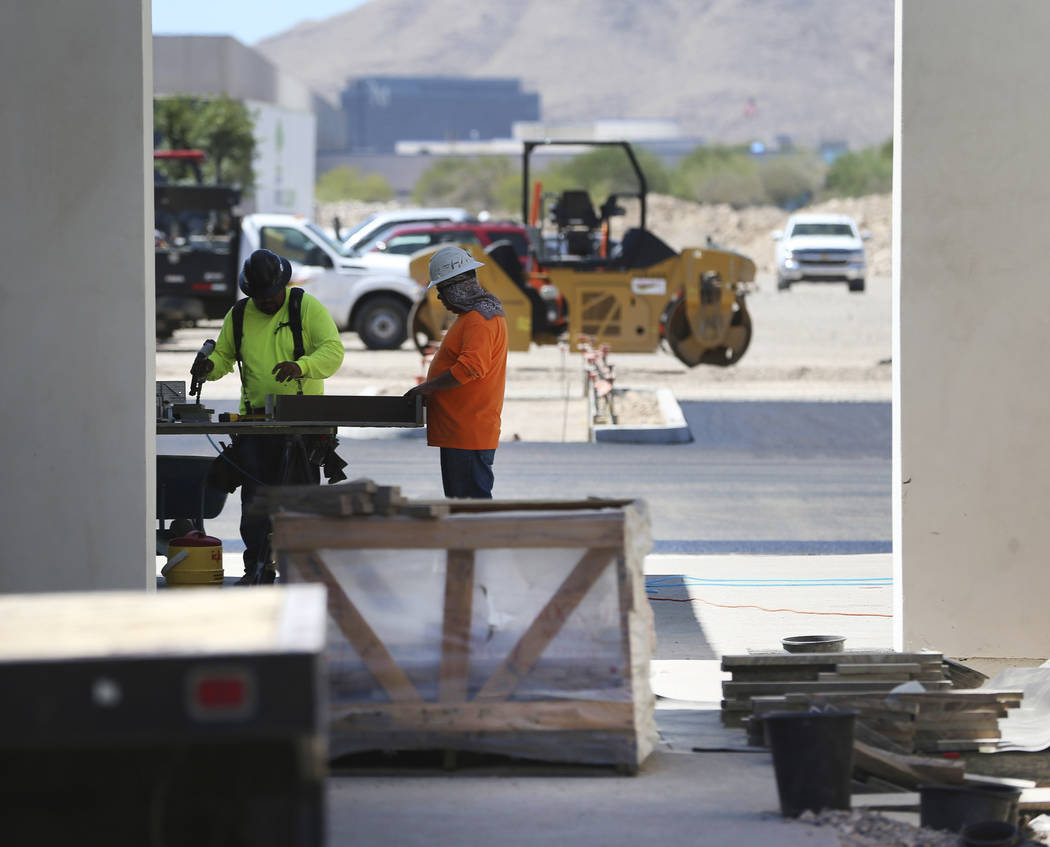 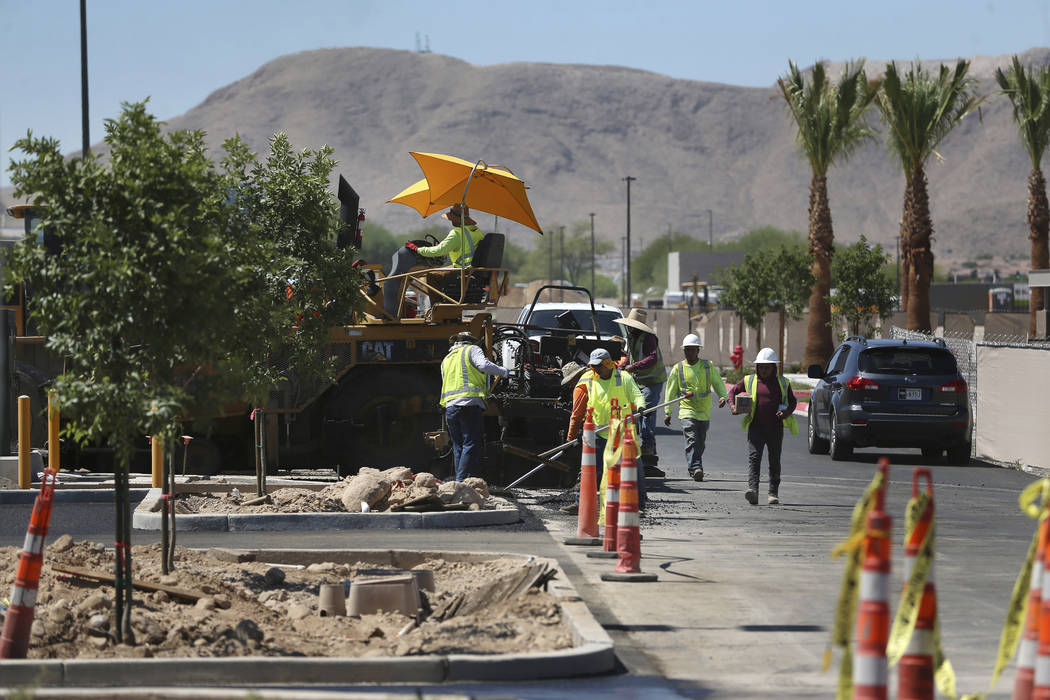 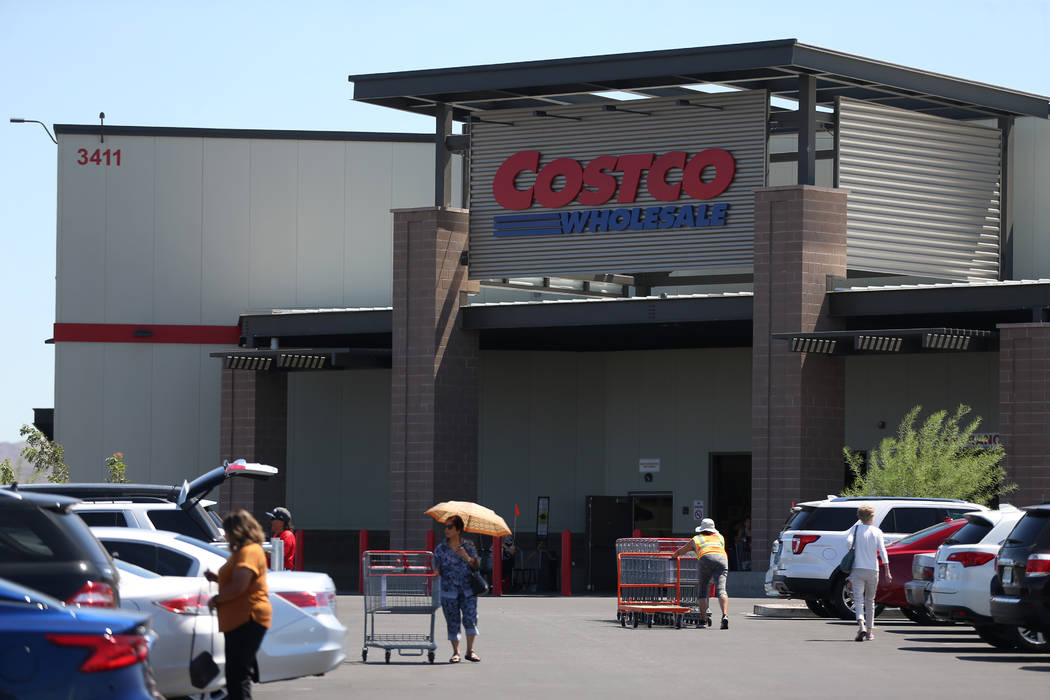 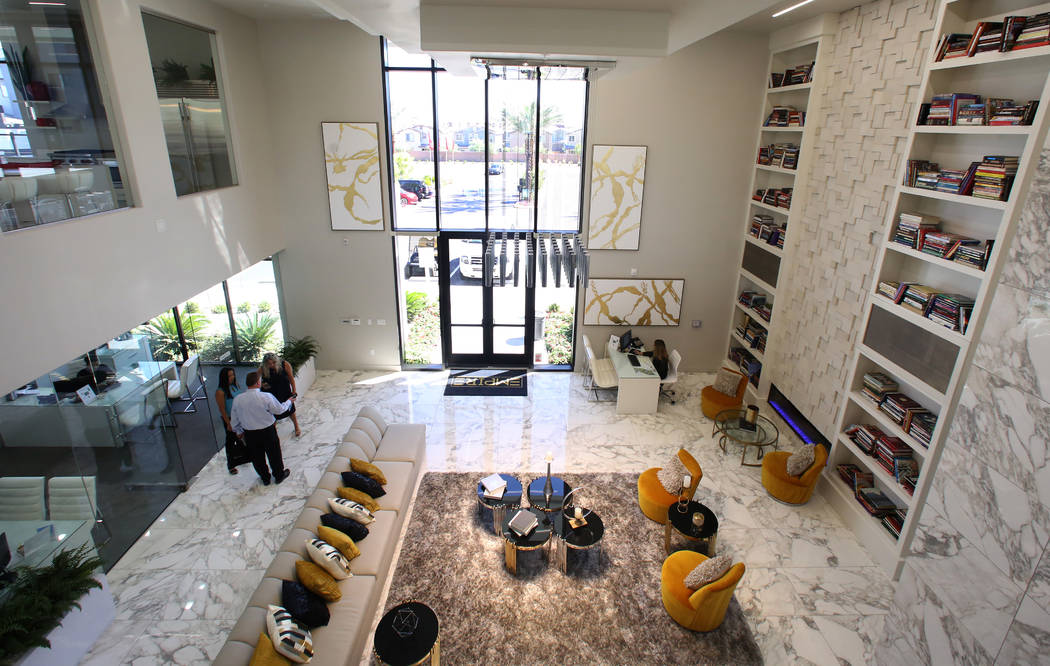 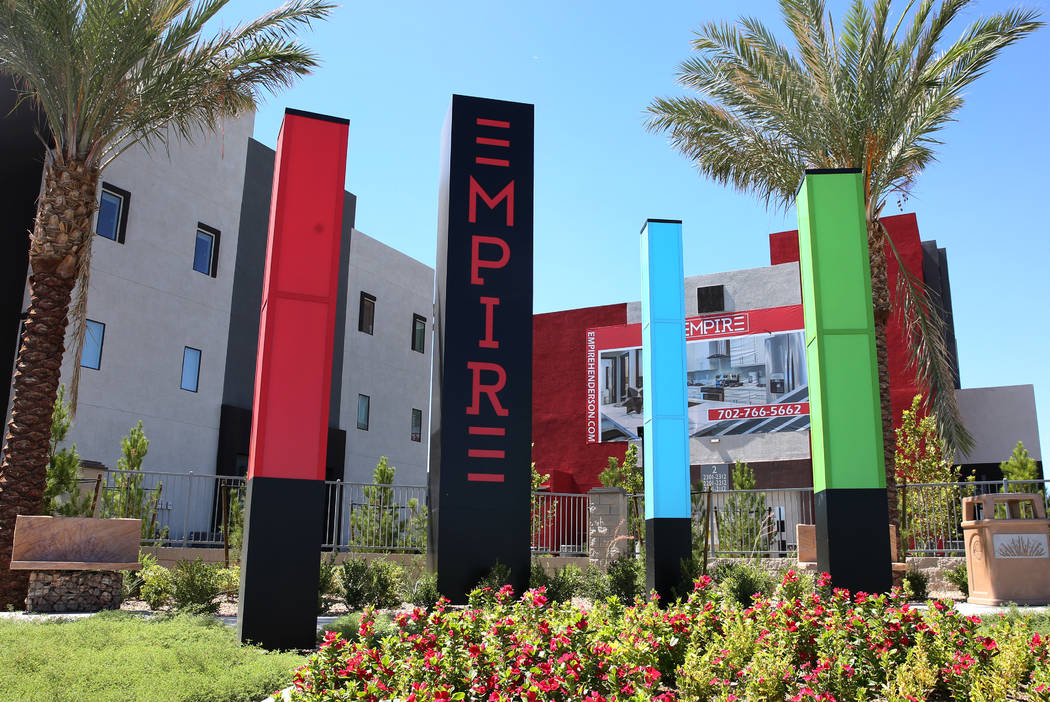 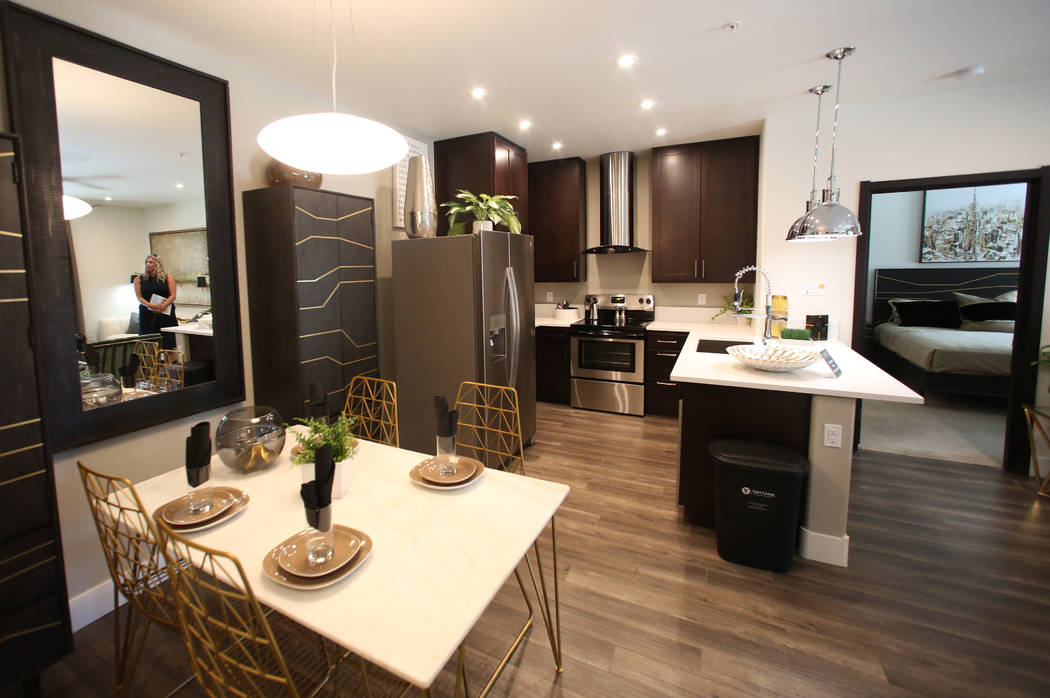 Dining area, a kitchen and a master bedroom are seen at Empire apartment complex is seen on Friday, Aug. 15, 2019, in Henderson. (Bizuayehu Tesfaye/Las Vegas Review-Journal) @bizutesfaye 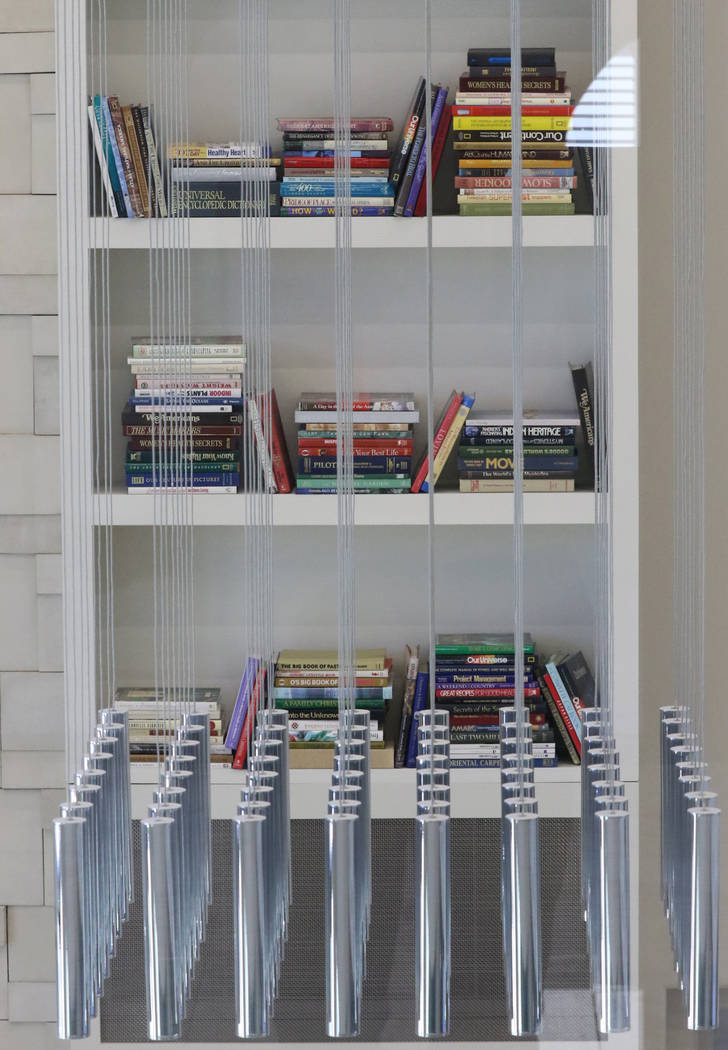 Books and light fixture are seen inside a clubhouse at Empire apartment complex on Friday, Aug. 15, 2019, in Henderson. (Bizuayehu Tesfaye/Las Vegas Review-Journal) @bizutesfaye 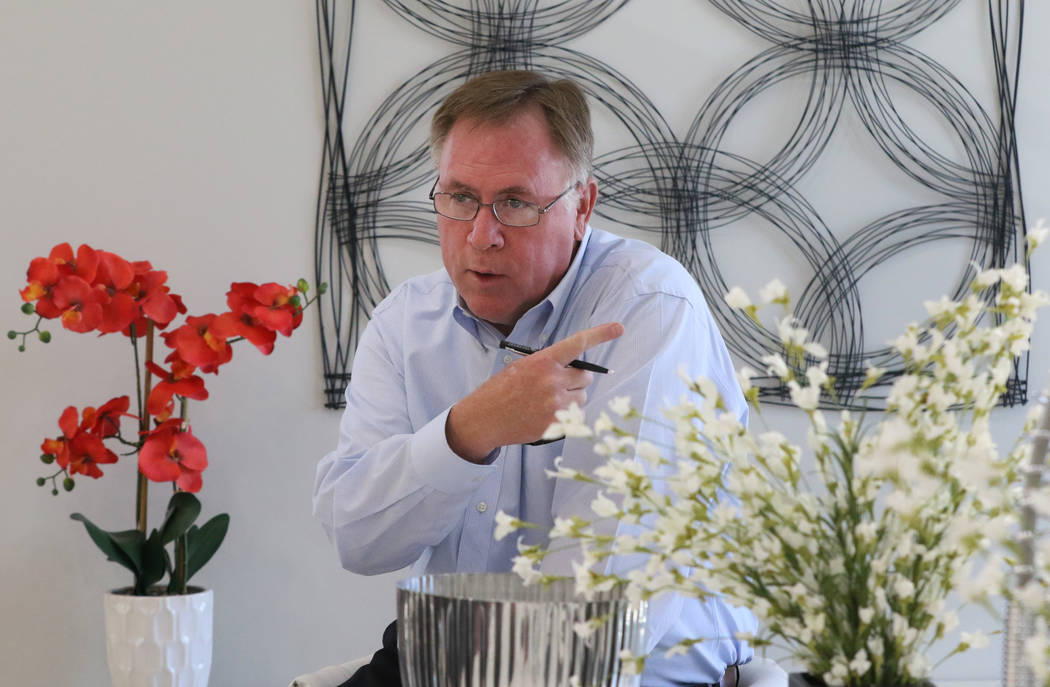 When Charles Bombard built his house near Henderson Executive Airport more than 20 years ago, he was pretty much in the middle of nowhere, surrounded by open desert and some dirt roads.

There’s still plenty of vacant land near his 2-acre spread, but now developers are pursuing dozens of projects in the area.

“It’s getting nuts out there right now, to be quite honest with you,” Bombard said.

Located at the southern tip of the Las Vegas Valley, the west Henderson area is poised to be blanketed with construction sites. Developers are building, have finished in the past few years or have drawn up plans for a total of at least 36 projects, covering more than 1,000 acres and featuring nearly 6,900 homes, the Las Vegas Review-Journal found.

All told, the dozens of projects would pump hundreds of millions of dollars into a once-sleepy area that was supposed to grow before the economy crashed and lagged other parts of the valley as construction rebounded in recent years.

Of course, just because something is planned doesn’t mean it will get built. Southern Nevada has a long history of real estate investors pitching big ideas and never following through. But the pile-on has turned west Henderson into a heated spot for new apartments, housing tracts, warehouses, retail centers and other projects.

Around 12,600 people lived in west Henderson at the start of 2019, though over the next 30 years the population is expected to reach 63,000, according to city spokeswoman Kathleen Richards.

Spacefinders Realty owner Eliot Alper, whose office is next to the Henderson airport, sees the construction every day. He deals with increased traffic from trucks and other vehicles, calling it a “horrible mix.”

He also didn’t expect things to develop so quickly.

“This has shocked me that it’s all of a sudden grown so fast,” he said.

Developers are building, have recently finished or have drawn up plans for at least 36 projects in the west Henderson area. Drag the map to view the area and click on a building for more details.

Project developments
Land sales on or near Las Vegas Boulevard

The 30-plus projects are in or near an area bordered by St. Rose Parkway to the north, Volunteer Boulevard to the south, Las Vegas Boulevard to the west and Seven Hills Drive to the east. Nearly all of them are in Henderson, with a few in unincorporated Clark County.

“It’s just mind-boggling that … all of the stars have aligned at one time,” said American West Homes founder Larry Canarelli, who owns land nearby on Las Vegas Boulevard and is developing a project in west Henderson.

The Raiders’ much-hyped football facility, under construction on Executive Airport Drive near St. Rose, has put a spotlight on west Henderson. But developers gave mixed responses as to whether its arrival has spurred other projects. They offered plenty of reasons for the activity, including the area’s proximity to Interstate 15, the Strip, McCarran International Airport and communities like Inspirada.

The area is also closer to Southern California than the warehouses of North Las Vegas. Some real estate professionals said that improves the odds that inbound truckers can drop off their products and get back before they have to take a rest period.

Moreover, its infrastructure is expanding, and as other parts of the valley get built out and more congested, west Henderson still has land — something any developer needs.

The area wasn’t entirely open desert before the current building boom — it already had the M Resort and the Lion Habitat Ranch, among other things — but it wasn’t supposed to be as undeveloped as it is now.

M Resort developer Anthony Marnell III said this month that it was never a question of if west Henderson would grow, but when. More than a decade ago, when he was developing the hotel-casino, people figured a “tremendous amount of homes” would be built nearby, giving the M a big base of local customers.

But like practically everywhere else in town, big ideas there fell through. During the mid-2000s bubble, developer Bill Plise set out to build City Crossing, a 126-acre project with hotels, luxury homes, retail space and offices near the Henderson airport. It was never built, and both the project and Plise went bankrupt.

Marnell, who lives in the area, noted that “nothing happened” for years in west Henderson after the economy tanked. It was quiet, with “For Sale” signs scattered about on desert parcels.

Construction has gained momentum in Southern Nevada over the past several years. But west Henderson is farther from the Strip than other areas and has “been kind of overlooked,” said Panattoni Development Co. partner Doug Roberts, who has been building industrial projects in the area.

One of the first big projects there after the Great Recession was a FedEx Ground facility. It opened in 2014 but wasn’t followed by much right nearby until the past few years.

“It’s taken over four years to get the traction we have now,” said Colliers International broker Dan Doherty, an industrial-property specialist.

Bombard, the longtime resident, has mixed feelings about all the development. The area has somewhat lost its secluded feel, he said. He now hears sirens and semi-trucks. But he is happy to see the valley growing and the economy on strong footing.

He can even see the Raiders’ facility taking shape from his house.

The Raiders bought a 55.6-acre plot from the city of Henderson last year for around $6 million — half the appraised value — and held a ceremonial groundbreaking in January. The team is scheduled to move to Las Vegas from Oakland, California, next year.

Raiders senior vice president Don Webb, who oversees construction of the practice facility and the 65,000-seat Allegiant Stadium, said the discounted land in Henderson was “certainly an inducement” to build there, but it was one of several factors.

He noted Raiders personnel have a nearby housing stock to pick from, and the site did not have to be cleaned from prior use. Plus, it was purchased from one seller, a less-complicated deal than buying parcels from multiple landowners.

It’s also across the street from Henderson Executive Airport, which caters to private jets and features, among other things, planeside limousine service.

Industrial buildings are some of the most popular projects in west Henderson. Among the newer businesses, grocery chain Smith’s operates a distribution center there, and bread maker Turano Baking Co. has an outpost.

Developer Jeff LaPour, who built an industrial project next to the Henderson airport and plans to build another a few miles away, said he caters mostly to local and regional tenants. Companies may not service that part of the valley, he said, but it’s a convenient location for the people who run them and live nearby.

Brass Cap Development has four industrial projects in the pipeline in the area, partner Jason Kuckler confirmed. He said the higher-profile ventures nearby are expanding west Henderson’s roads and utility service, making it feasible for other developers to follow.

He also said Brass Cap is getting lease proposals for its various projects and is looking to build more.

A possible reason builders and tenants are looking south:

Developers have been flooding the valley with warehouses, and according to Colliers’ Doherty, industrial pockets are “becoming extremely congested.”

Allegiant Stadium, for instance, is being built next to a mostly industrial area. With the venue expected to hold dozens of events annually, that part of town will become “increasingly congested in an unpredictable way,” said Matter Real Estate Group partner Jim Stuart, whose firm is developing an industrial project in west Henderson.

‘Out on the fringes’

Nevada West Partners, one of the biggest apartment developers in the valley, is building three rental projects in west Henderson and has drawn up plans for another, comprising more than 1,600 units total.

Martin Egbert, a managing partner, said his group typically needs about 15 acres or more for a project, and there aren’t other areas closer in with that much land.

“We kind of have to be out on the fringes,” he said.

In many ways, west Henderson still has a rural feel. Bombard said his home relies on a water well, a septic tank for sewage and a propane tank for gas.

He isn’t thrilled to see development coming closer to his house, but if someone wanted to buy his place and build an industrial park, he wouldn’t be mad about it.

People have asked if his home is for sale. For the right price, he said, everything is.