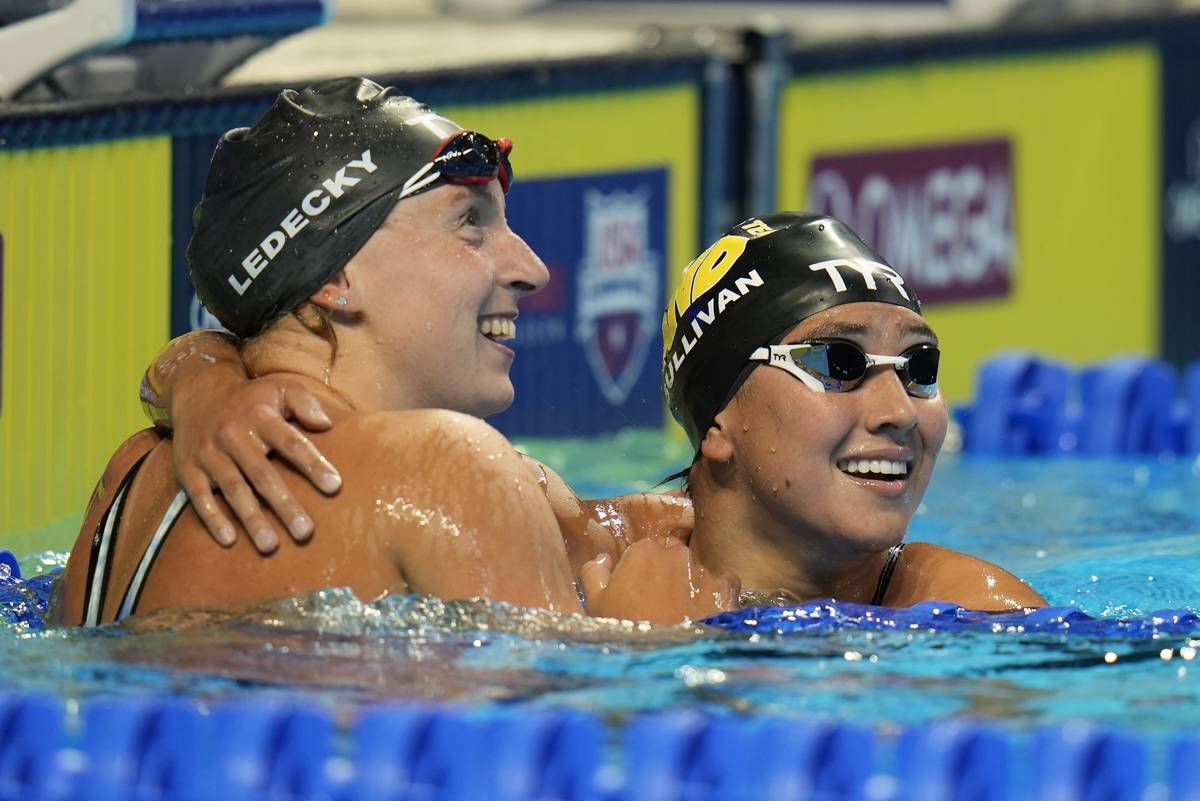 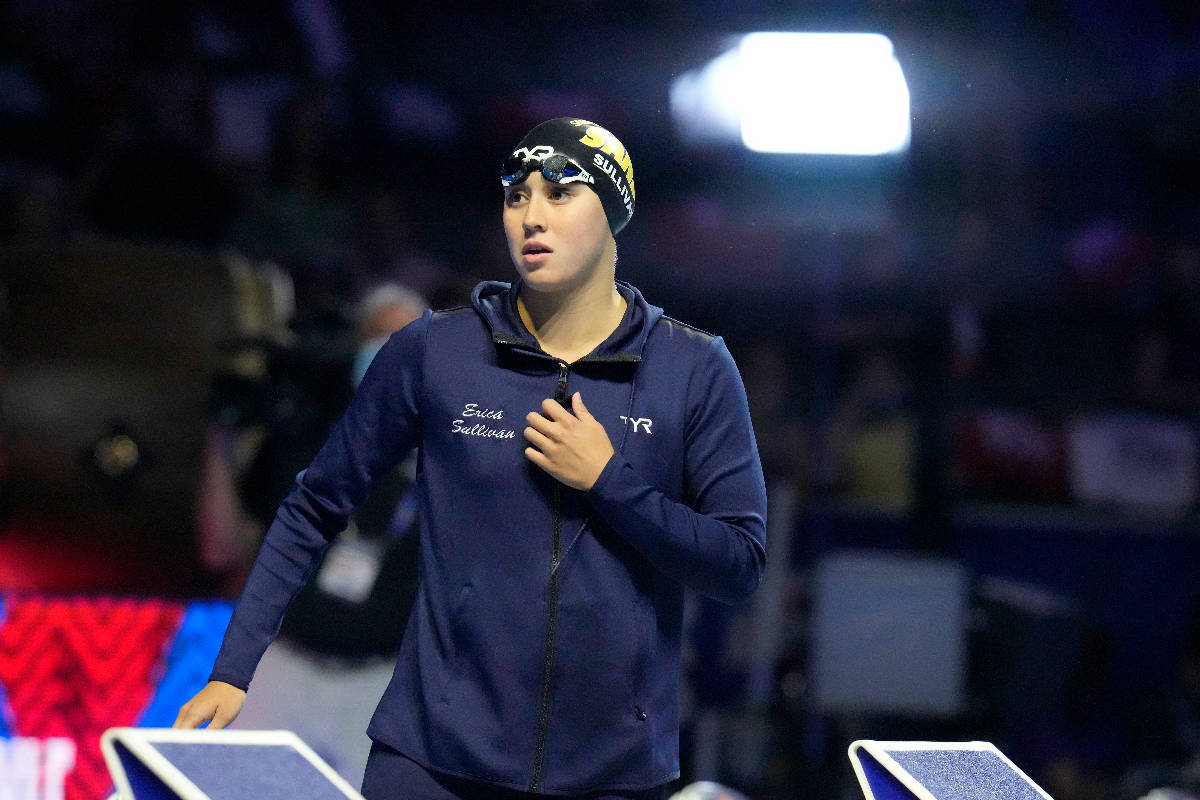 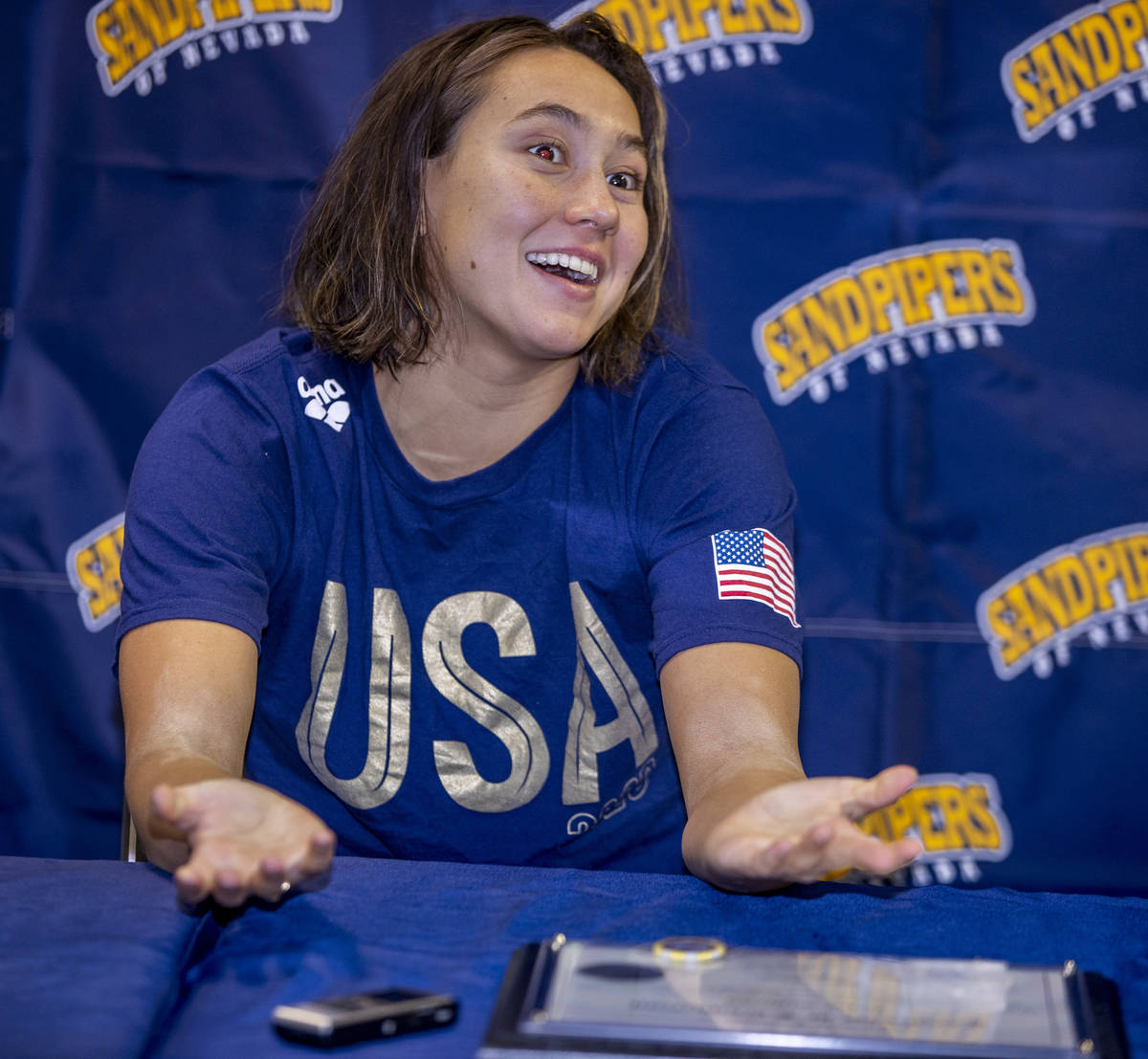 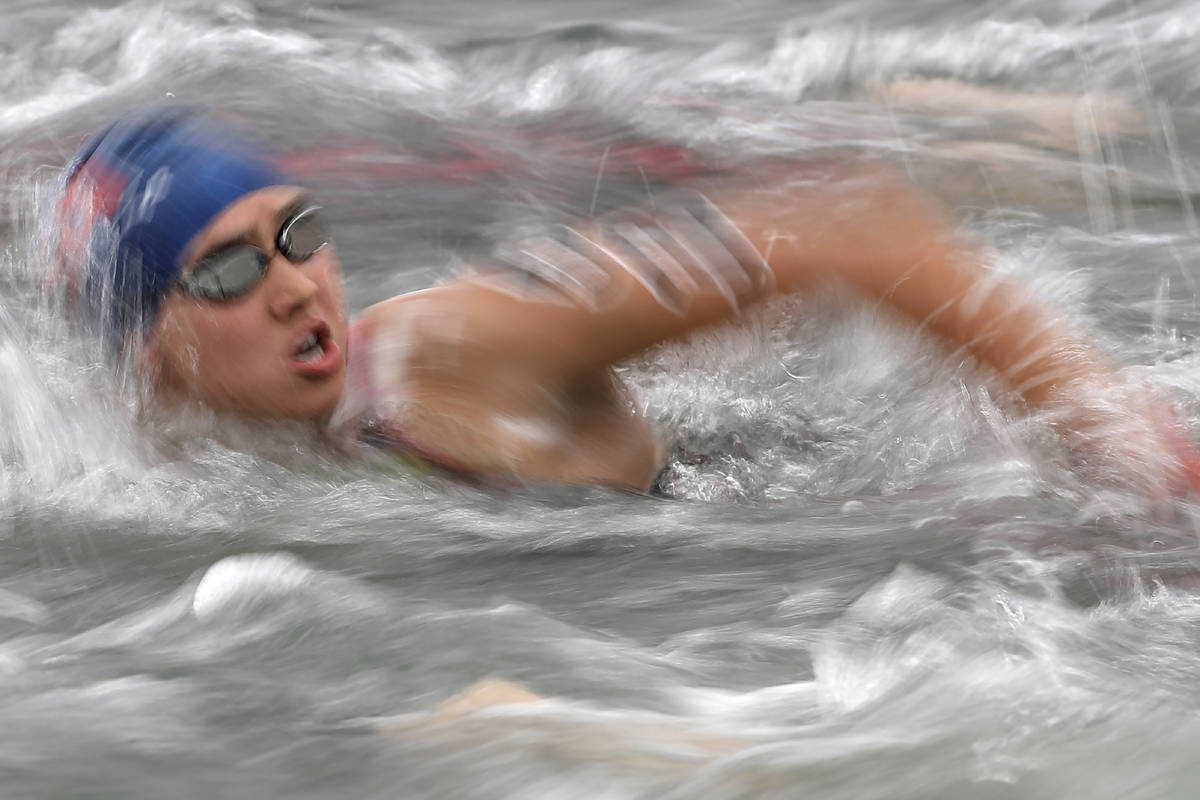 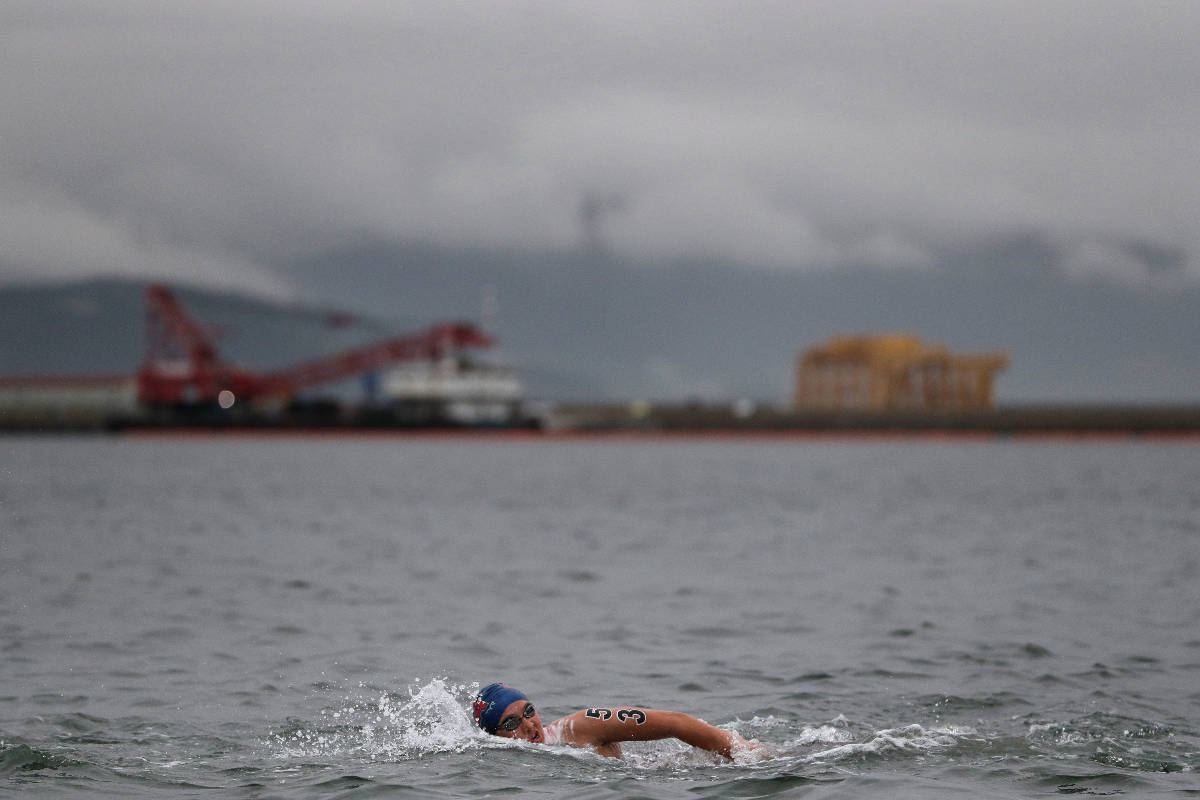 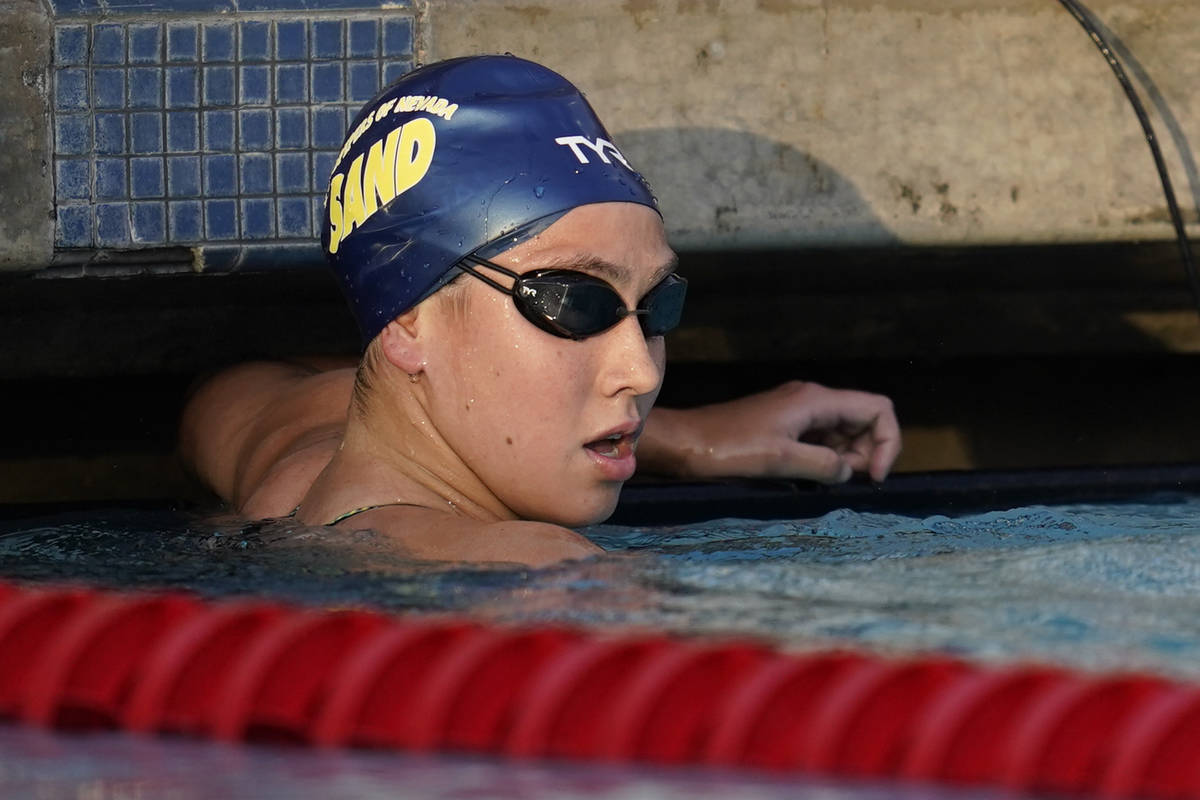 Erica Sullivan looks at the scoreboard after competing in the women's 800 freestyle at the U.S. Open swimming championships Thursday, Nov. 12, 2020, in Irvine, Calif. (AP Photo/Ashley Landis) 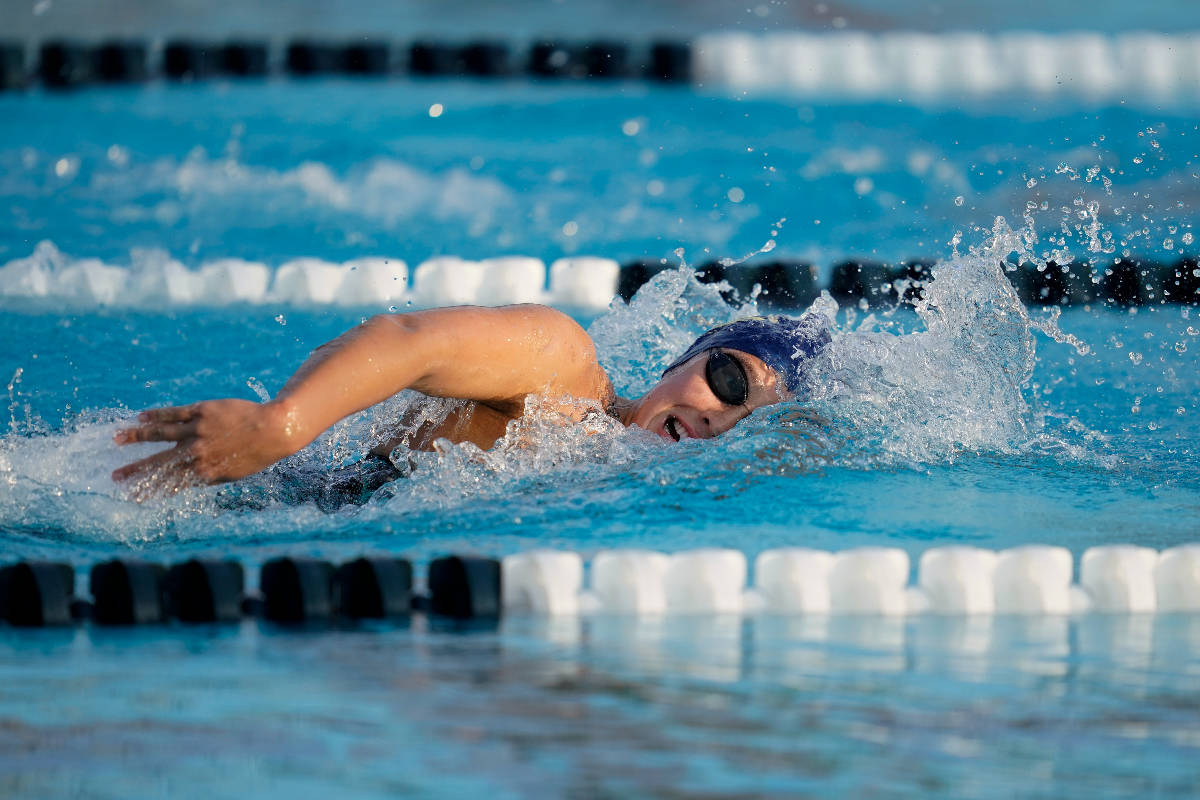 The passion for swimming came from her dad, but suddenly Erica Sullivan knew she couldn’t turn to him anymore.

John Sullivan, who swam collegiately at Wisconsin, was diagnosed with esophageal cancer in April 2017. He died three months later.

Devastated, Erica Sullivan knew her dad wouldn’t want her to quit, especially with her so close to making the national team and all the work they had put into the effort. A month later, she was on the squad, but Sullivan was a mess.

She was depressed over her dad’s death and coming to terms with her identity as a gay person, and her training sessions suffered. Sullivan began to see a therapist.

“When I was 16, I was very sheltered,” said Sullivan, who went to Palo Verde High School and swims for Las Vegas-based club Sandpipers of Nevada. “I just really hadn’t gone through anything in my life. Having the unfortunate set of circumstances that I had to go through, I was forced to grow up very, very quickly.”

Gathered with two of her Sandpipers teammates last month to promote the three making the U.S. Olympic team, Sullivan appeared anything but depressed. The mood was lighthearted, and she jokingly called herself “the grandma” of the group. Compared with 15-year-old Katie Grimes and 16-year-old Bella Sims, Sullivan certainly is the elder stateswoman.

The 20-year-old heads to Tokyo hoping to medal in the 1,500-meter freestyle. A swimmer by the name of Katie Ledecky is in the same event.

The two faced off at last month’s Olympic Trials in Omaha, Nebraska. Sullivan thought she had a chance to make a move on the face of women’s swimming, but Ledecky noticed the charge and promptly left her competitor behind just like she has done so many others.

Sandpipers coach Ron Aitken said that though Sullivan didn’t finish as strong as hoped, coming in second without an ideal final kick showed she could make a mark in Japan because there is room for improvement.

He has prepared Sullivan for three years for this summer by timing a training regimen meant to maximize her performance for the Games.

“Erica, I think, is going to go a lot faster,” Aitken said.

Being a role model

This isn’t Sullivan’s first trip to Japan. She is half Japanese, has family there and speaks the language fluently.

“It’s awesome that I get to be a role model for a lot of communities that feel underrepresented in this sport, especially the queer community and the Asian American community,” Sullivan said.

She said she was especially touched when Raiders defensive end Carl Nassib announced last month that he is gay, and she said swimming has some catching up to do when it comes to accepting gay athletes.

“I think there’s a stereotype in football that once you come out as a gay man, you’re deemed as feminine a little bit,” Sullivan said. “I am so glad that he is in a place where he feels comfortable and safe enough, and I hope he has all the support in the world.”

Sullivan has found plenty of support, and though she doesn’t go out of her way to advertise being gay, she also doesn’t keep it a secret.

Support came in another manner at the Olympic trials when her dad’s former Wisconsin teammates showed up. “It felt like a piece of him was there,” she said.

Her future Texas coaches also were there to embrace Sullivan after her runner-up finish. It has been quite a journey for Sullivan, who committed to Southern California as a 16-year-old before switching to Texas in September.

She put college on hold to pursue her Olympic dream, but said she will be all Longhorns after Tokyo.

“Erica’s a tremendous young lady who has been through a lot!” Texas coach Carol Capitani wrote in an email. “She’s an extremely hard worker with big goals, but she also has a depth and breadth to her passions outside of swimming which we appreciate. We can’t wait until she’s here in the fall.”

Sullivan has some work to do before then, but such a concept is not foreign to her.

Growing up, she was among the slower swimmers in her age group and had difficulty getting promoted to the next level.

Sullivan kept at it and eventually became a two-time open water national champion. Now she’s an Olympian in the indoor and more well-known version of the sport.

“I was just stubborn,” Sullivan said. “Stubborn and stupidly competitive. That can be a weakness in day-to-day life, but use what people deem as a weakness to your strength and keep trying and show up every day. As long as you’re having fun, it’s going to pay off.”