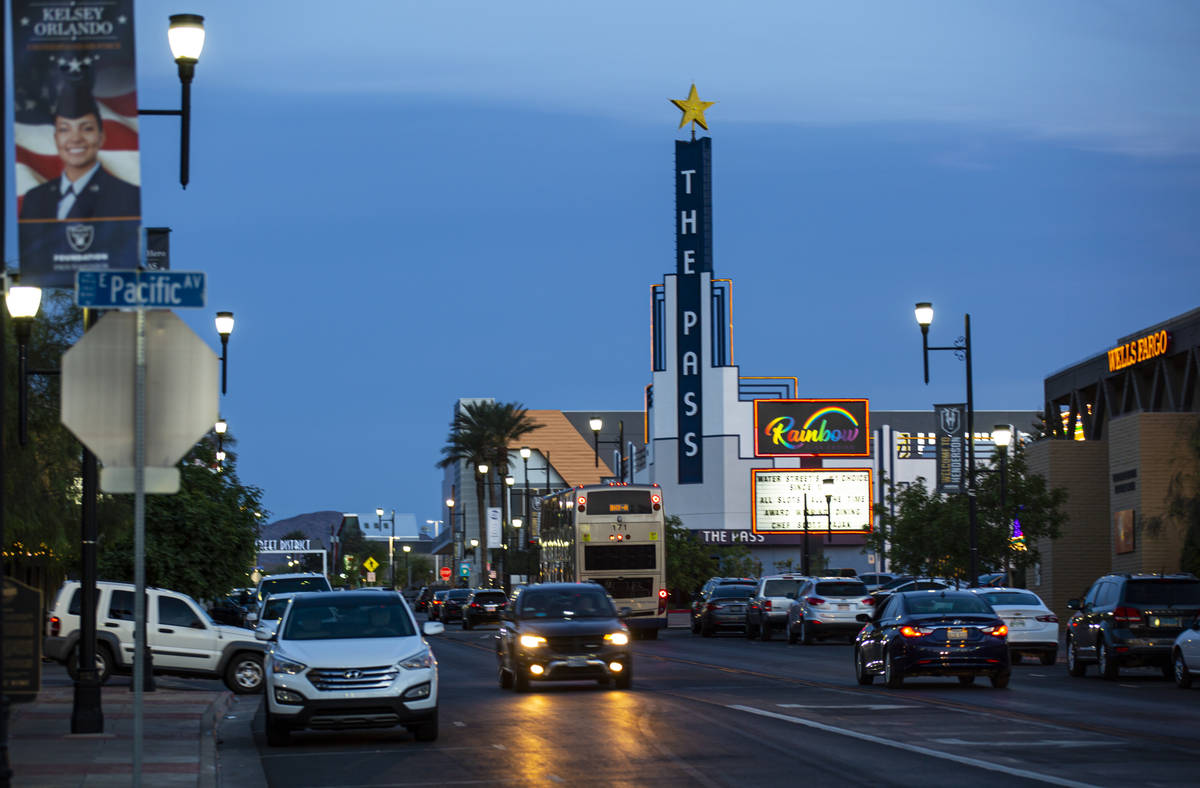 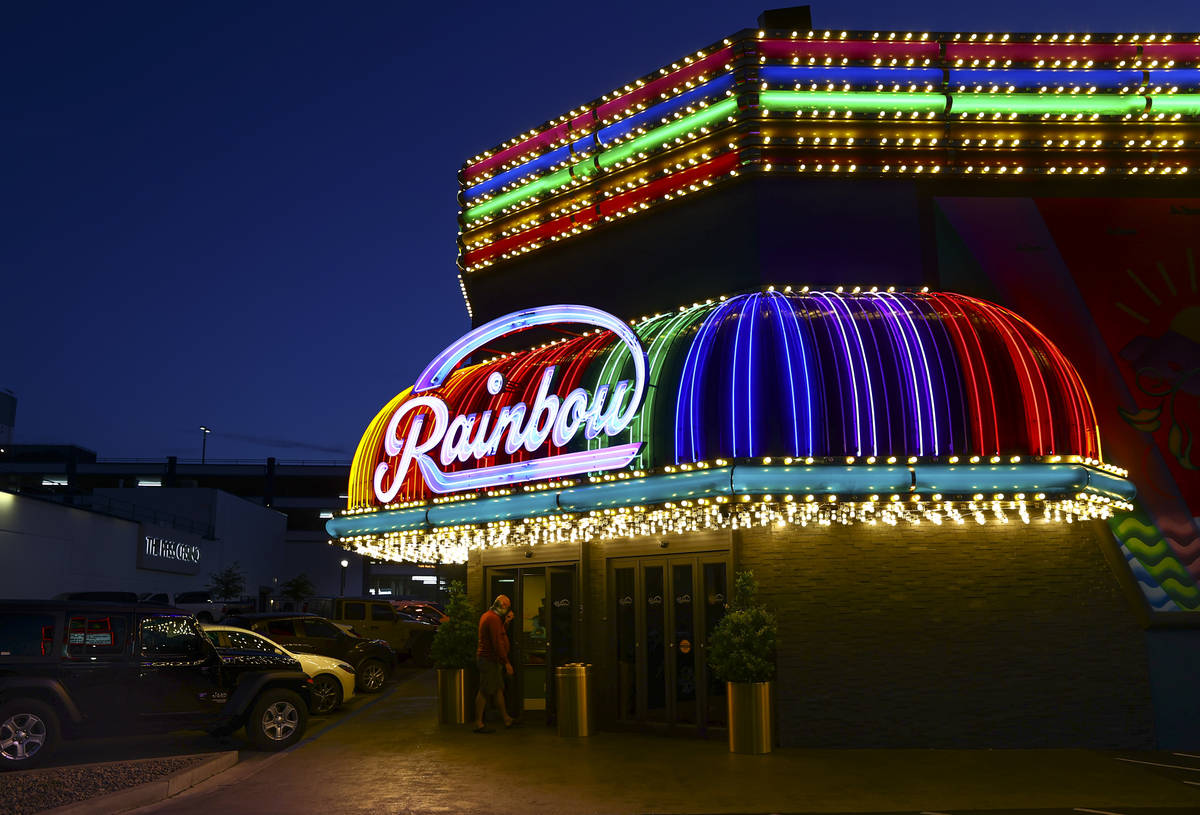 An exterior view of the Rainbow Club and Casino in the Water Street District of downtown Henderson on Monday, April 12, 2021. (Chase Stevens/Las Vegas Review-Journal) @csstevensphoto 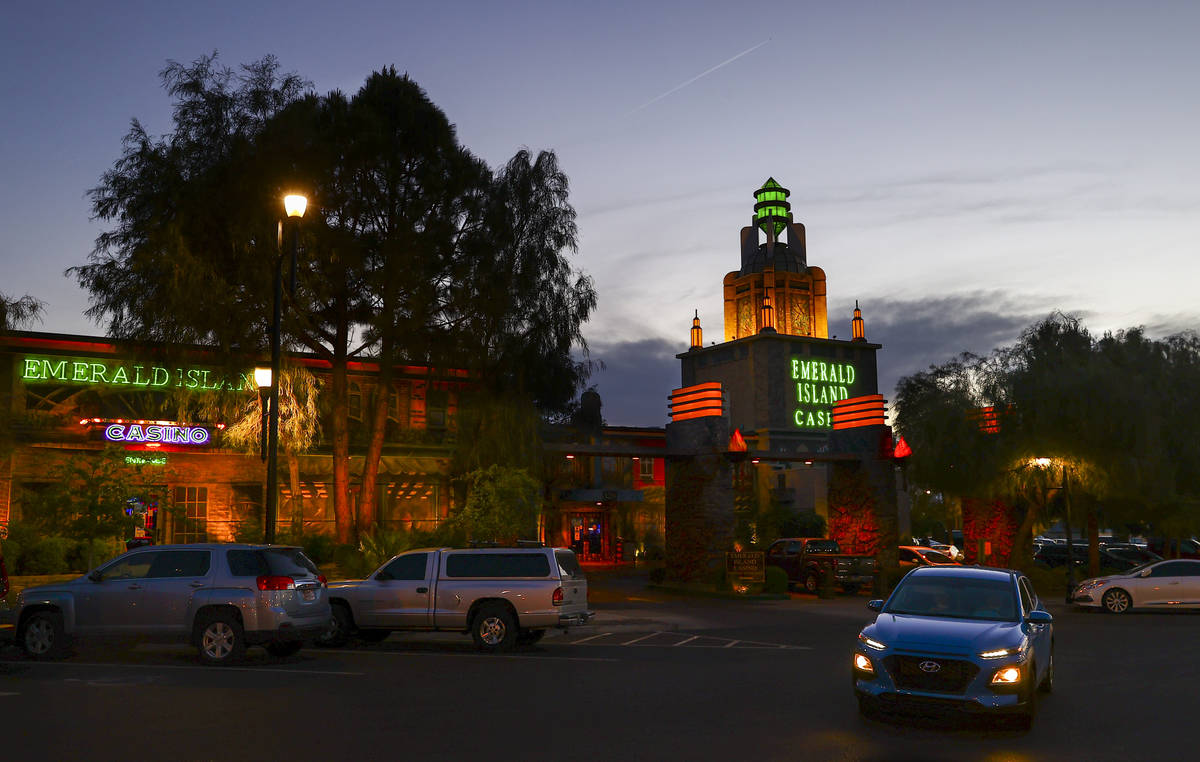 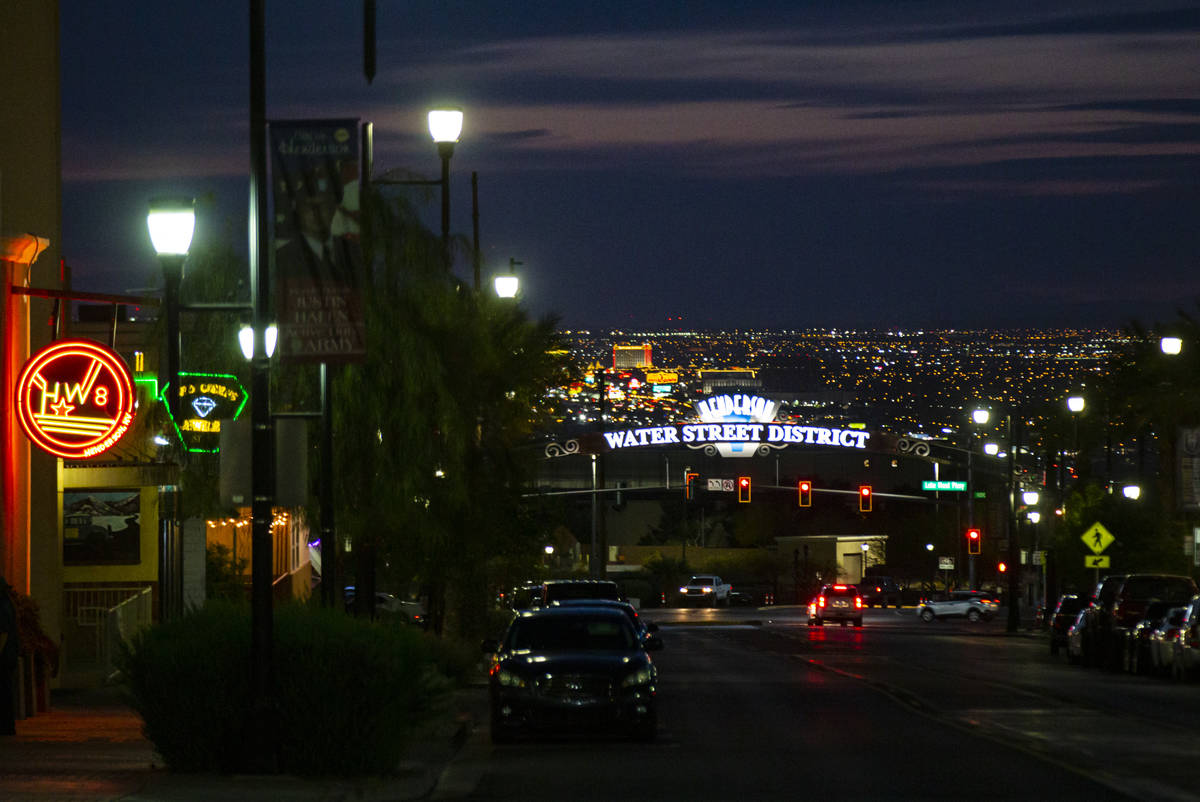 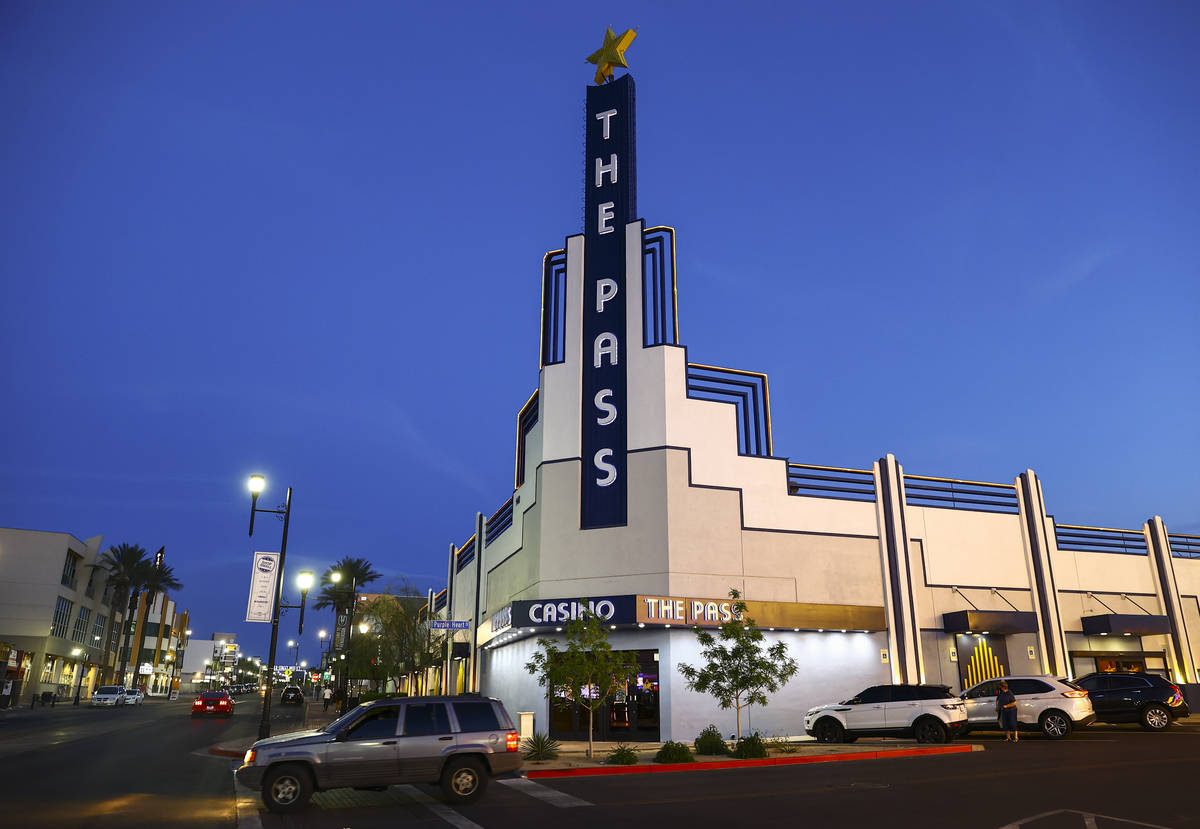 A car drives by The Pass casino in the Water Street District of downtown Henderson on Monday, April 12, 2021. (Chase Stevens/Las Vegas Review-Journal) @csstevensphoto 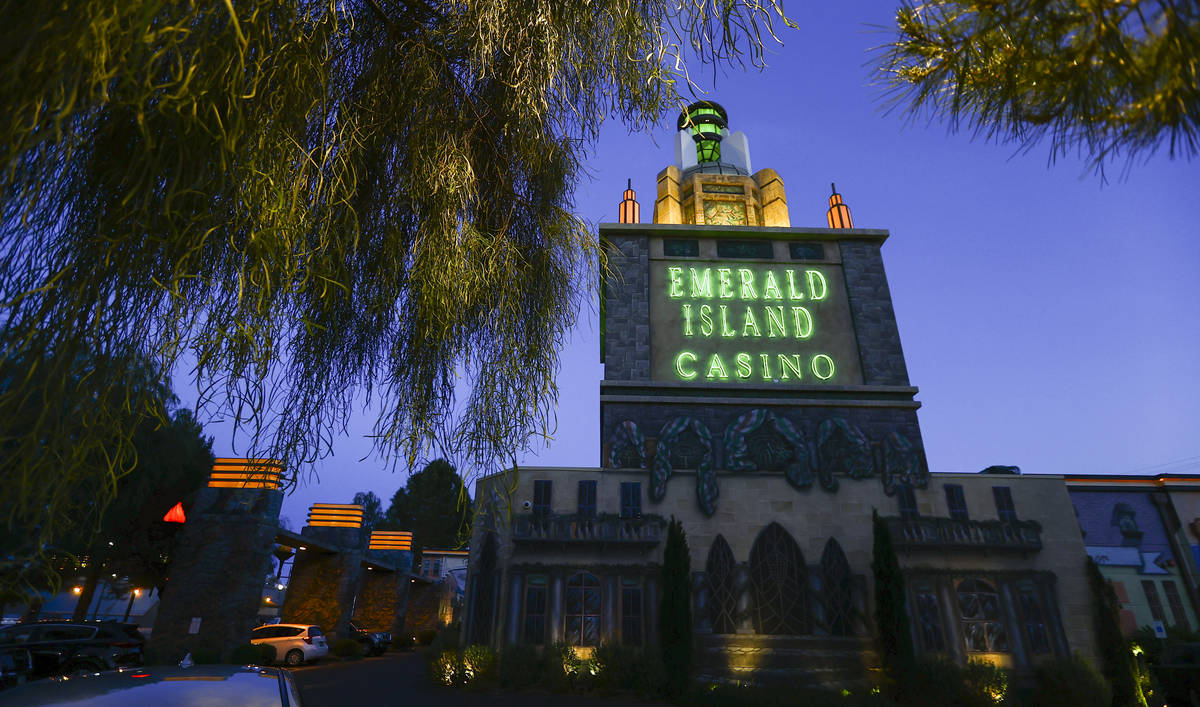 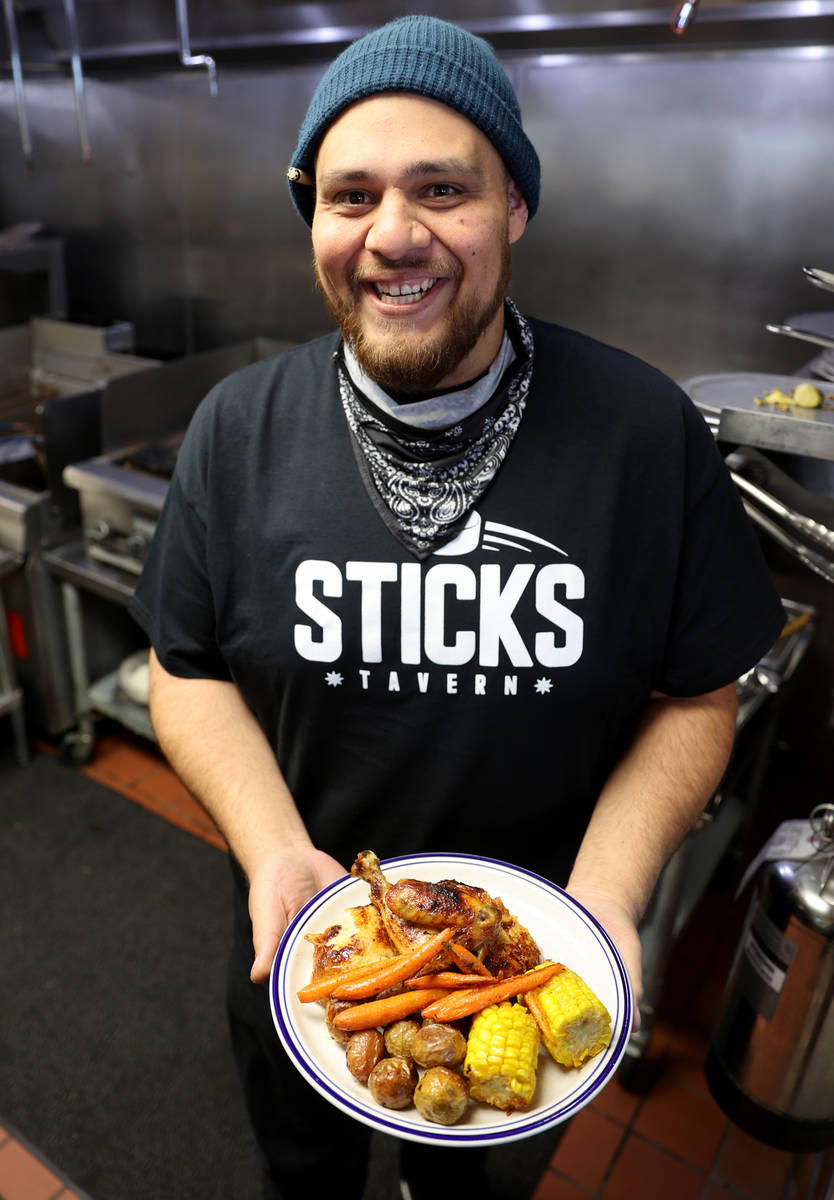 For years city officials have devoted much time and energy to creating a bustling, vibrant community hub along Henderson’s Water Street.

Now those efforts appear to be paying off. New businesses have set up shop in the Water Street District and created more reasons for people to venture to the historic downtown area.

“I’ve been in this valley for 30 years now, and I live in Henderson, and I love Henderson,” she said. “But for most of those years, it wasn’t even on my map. … It wasn’t something that occurred to you. But now people are saying, ‘Oh, let’s go down to Water Street this weekend. Let’s go to Water Street on Friday.’ ”

While the spring weather and rising vaccination rates have helped draw people out of the house, city officials say the key is that now they have somewhere to go.

The area has reached a “critical mass” of attractions, according to City Councilwoman Michelle Romero. She said she’s talked with business owners and workers, and “every single one of them have noticed a significant uptick in how busy they are each night.”

“It’s good to see just everything that’s happened on Water Street just in the last six months, let alone what’s happened over the last three years or so,” he said Thursday night. “It’s just really wonderful to see such a diversity on one street all close together where people can go spend their money, have a good time and be safe.”

Biscuits and Bourbon customers Kim and Don Charlton said they relish being able to enjoy all that Water Street offers.

“Downtown Henderson is the new vibe down here for Henderson,” Don Charlton said.

“And it’s close to home,” Kim Charlton added. “We’ve been here 23 years and this is the first time we’ve been able to be in our own town and just walk up and down, have drinks, play games with our friends and just have a good time.”

‘Lines are out the door’

One of the latest signs of Water Street’s resurgence came with the opening this month of The Pass. The casino, one of the newest investments in the downtown area, already appears to be drawing more people to the area.

And while The Pass has been open only a few weeks, that’s apparently enough time for owner Joe DeSimone to already begin thinking bigger.

“It’s been fantastic,” DeSimone said this month. “We have people having so much fun there … . We signed up between, as of yesterday, I think we’re at (3,000) or 3,500 players club members. And the lines are out the door and the attendance has been good.”

The former Eldorado Casino reopened April 1 under new ownership and a new name, DeSimone Gaming and The Pass, respectively. Boyd Gaming Corp. confirmed in December that it sold the property at an undisclosed price to DeSimone Gaming, which then spent $7 million to renovate the property in a couple months.

DeSimone is hiring at The Pass and his other property, Railroad Pass. He said he’s planning to expand Emilia’s Cafe into a walled-off segment of the previous property’s diner in about 30 days. It should double capacity to accommodate demand, which he said was strong. “There (was) an hour-and-a-half wait the other day.”

DeSimone said that he’s moved up plans to proceed on a hotel at The Pass in a year, rather than 18 months, and he’s exploring adding suites with kitchenettes that could benefit hockey families staying for tournaments at the next-door Lifeguard Arena.

Neighboring businesses also are getting a boost from The Pass.

Emerald Island casino co-owner Tim Brooks told gaming regulators this month that he’s seen an uptick in business at his other property, Rainbow Club, since The Pass opened its doors.

In an interview with the Review-Journal, Brooks said it was a “fairly strong” first financial quarter for both of his casinos, followed by an extra boost this month from people who came to check out The Pass and then made their way over to his properties.

He figured DeSimone’s investment into The Pass would bring more business to downtown Henderson — good for his properties and Water Street in general. So far, he’s “really, really happy” with the results, Brooks said.

“We think the future in downtown Henderson is quite bright for all of us who’ve put a lot of blood, sweat and tears over the years to grind it out and see it finally come to fruition,” he said.

Water Street businesses have a common interest in helping each other grow, Bailey said.

Jordan Camacho said it didn’t take long for him to experience the friendly vibe at his own new business, from customers and business owners alike. He and his mother/business partner, Robin Camacho, began serving customers at their Sticks Tavern this month.

What drew him to Water Street was its mix of two very different Nevadan energies: the excitement of downtown Las Vegas’ Fremont East district as it was taking off and the small-town feel of Northern Nevada.

“It seems like a small town where everyone knows everyone and, when new stuff opens up, the community kind of rallies around to support and check it out,” Camacho said. “And it just reminds me of back where I grew up, up in Elko.”

The tavern is already drawing “way more business than we thought we’re gonna have,” he said. Customers are coming in off the street, visiting for a hockey tournament or are patrons of the former Sunset Downtown pizzeria at the same location.

“On Friday, we actually unfortunately ran out of food at one point during the night. Not just out of prep items, we ran out of ingredients to prep items,” Camacho said April 14. It wasn’t a fun message to deliver to customers at the time, but “I mean, if you’re going to have a problem, I guess that’s a better one to have.”

Camacho said he’s received support from the Brooks brothers, Hardway 8, Gold Mine Tavern and Lifeguard Arena staff. City officials swung by the restaurant and sent along the menu to city employees, he said.

“It may seem counterintuitive, but everyone is trying to just raise everyone else up,” Camacho said.

Borne from that same spirit, Emerald Island’s casino player cardholders can redeem their points at a number of Water Street businesses. Brooks even encouraged DeSimone to buy the shuttered former Eldorado, which DeSimone already had been eyeing for a few years.

Brooks said he and his twin brother, Michael, had their own aspirations of possibly acquiring Eldorado until Rainbow Club became available. They closed a deal for Rainbow Club in May, spent “a couple million dollars” to spruce up the casino ahead of its Sept. 17 reopening and have continued to spend on refurbishments, he said.

“And so we met with Joe and told him that we are going to pass (on Eldorado) and we would do anything we could do to help him,” Tim Brooks said.

That support was “huge,” DeSimone said, noting the friends didn’t want to compete for the same property.

Instead the end result, according to DeSimone, was two good operators coming in and complementing one another “to bring more people to downtown and the Water Street District.”

“We see people walk back and forth between the properties just to get a different experience, which is fine,” he said.

It’s been a long time coming, but the Water Street District is starting to realize its potential, driven in part by recent catalysts, according to Henderson’s downtown redevelopment manager, Anthony Molloy.

The Pass has brought more people to the district, though vaccinations, easing virus restrictions and warmer weather have probably also helped boost traffic in the area, Molloy said.

He cited what he called a developer’s joke about “an overnight success that took 30 years to happen.”

“People that haven’t been down here will say, ‘Hey, when did this happen?’ Well, it’s been happening for the last 15 or 20 years,” he said.

The district needed a decade to recover from the Great Recession, and within months of that, COVID-19 hit, Molloy said.

“But we are starting to see the benefits of the planning and the investment in the infrastructure, so that the private sector could come in and take advantage of the investments that we had made from the public side,” he said.

The arena is “probably the biggest catalyst that’s really turned things around,” said Brooks, owner of the Emerald Island and Rainbow Club casinos. “And it spurred other development and other investors that are very interested in doing business here in the Water Street district of downtown Henderson.”

The arena’s Water Street location has increased traffic in the area, Bailey said. It’s a confidence builder for people looking to develop, rent or do business in the area. She and Romero also noted their excitement for the under-construction Water Street Plaza, a mixed-use venue next to the arena that’s scheduled to open in the coming weeks.

One of the city’s current goals is to bring housing to the area, particularly for those looking to buy their first home, Molloy said.

Increasing homeownership stabilizes the neighborhood, changes its demographics and provides a “denser population base” of potential Water Street customers.

“We know that there are a lot of people out there that are renting. But with the increasing median price of a home in the metropolitan area, it’s becoming quite unaffordable for people to transition from being renters into homeowners,” he said.

Last month, the Henderson Redevelopment Agency voted to enter into an exclusive negotiating agreement with Lennar to sell two parcels downtown to the homebuilder. If the parcels are sold to Lennar, the company is planning to build town homes, Molloy said.

This month, The Watermark, a mixed-use development, will break ground across the street from the City Hall events plaza, he said. The building will feature apartments as well as office, retail and restaurant space.

A 32-unit apartment complex is also being built on Basic Road, near the City Hall parking garage, he said. And at the end of May, another project is expected to break ground on Water Street, he said. That project would feature about 100 residential units and restaurant space.

US adds a surprisingly strong 517,000 jobs despite Fed hikes
By Paul Wiseman The Associated Press

America’s employers added a sizzling 517,000 jobs in January, a surprisingly strong gain in the face of the Federal Reserve’s aggressive drive to slow growth and tame inflation with higher interest rates.