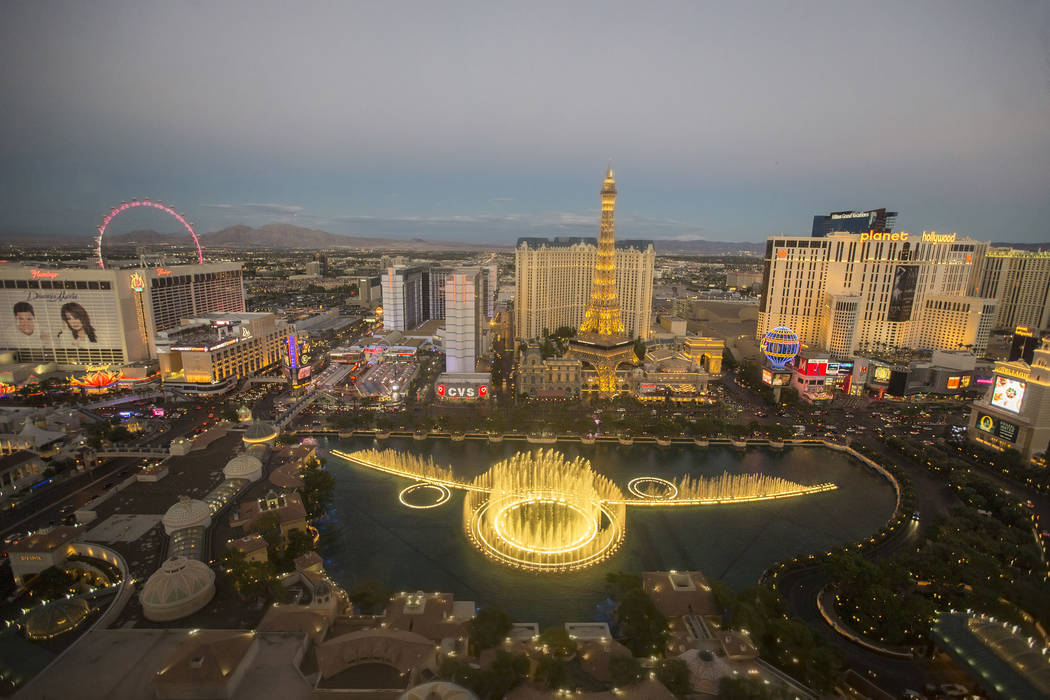 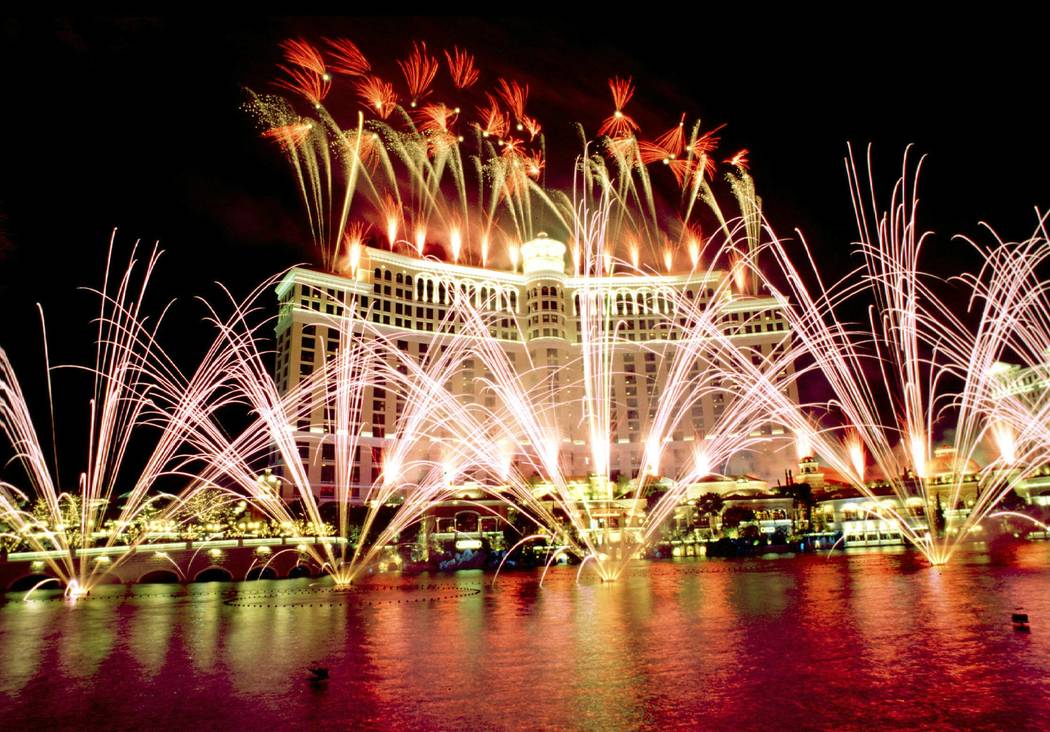 Fireworks light up the sky above and around the Bellagio during the grand opening celebration of the casino on Sunday, Oct. 18, 1998. (Las Vegas News Bureau) 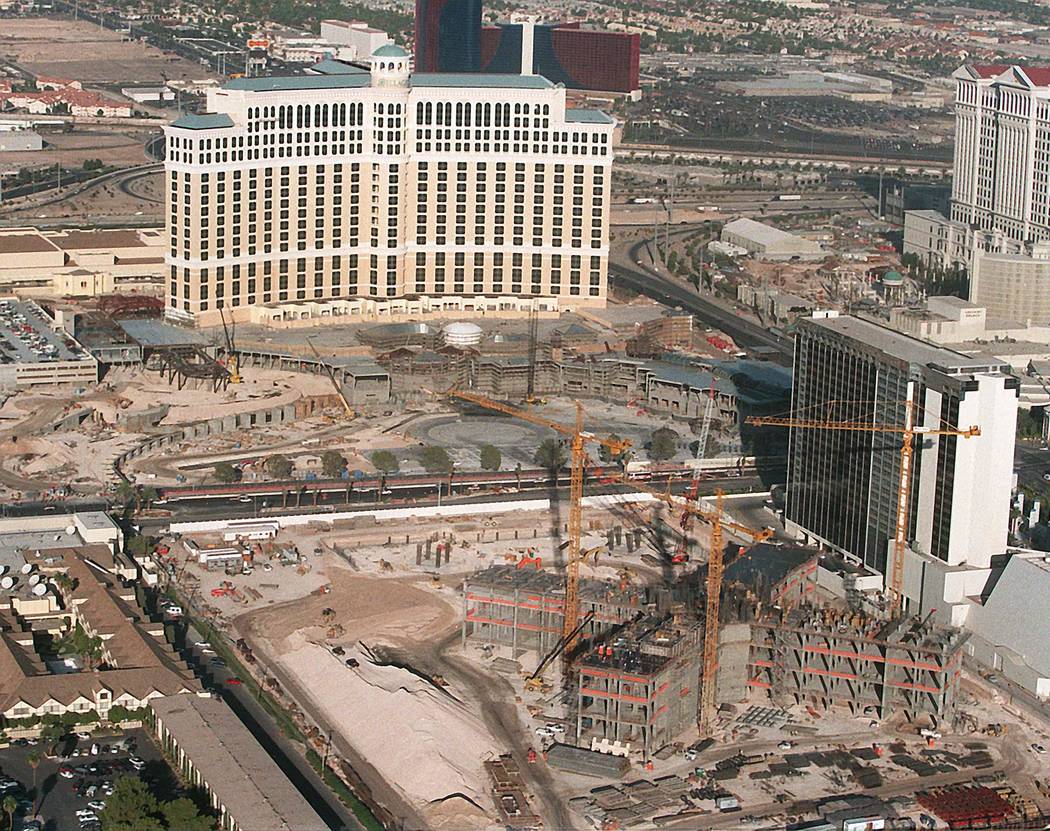 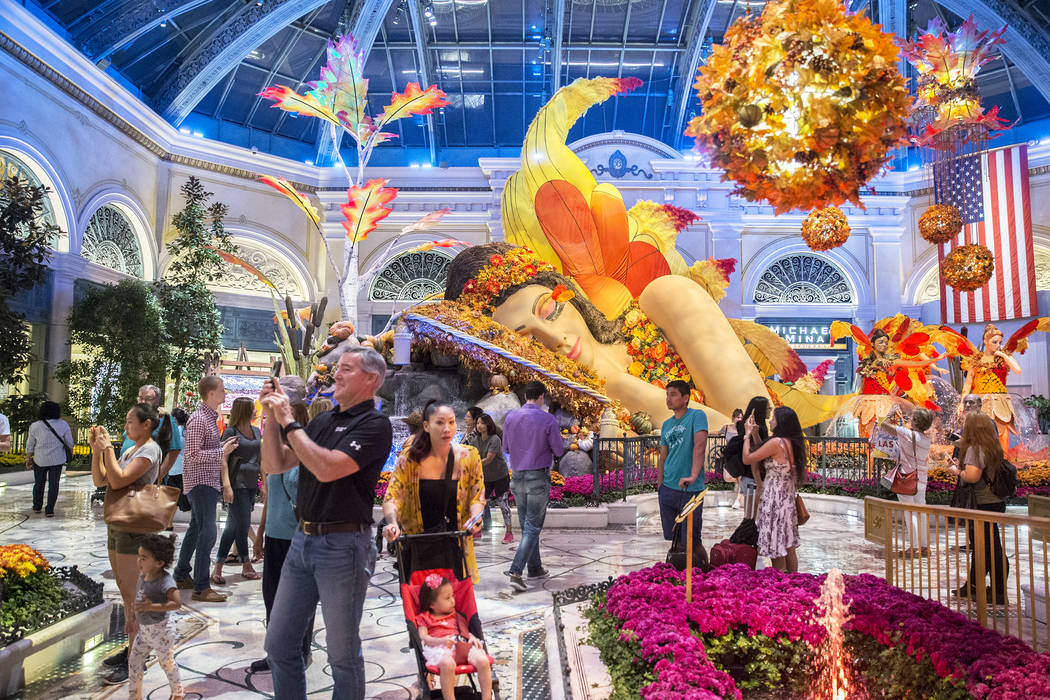 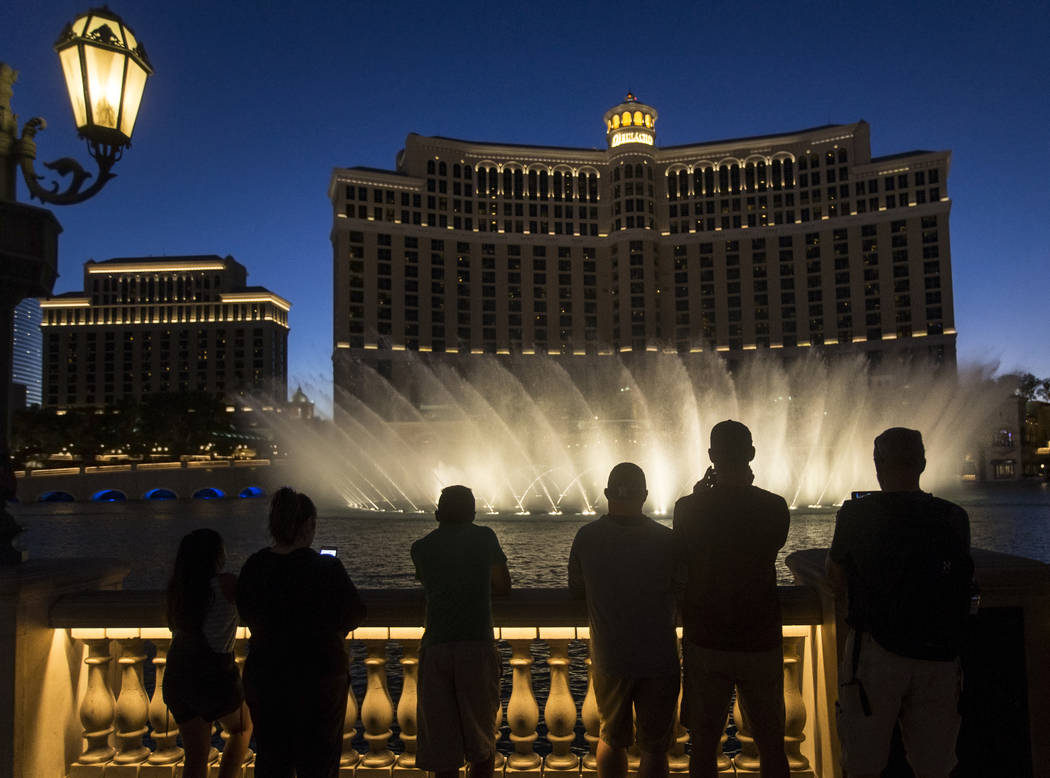 The Bellagio on the Las Vegas Strip, which opened its doors on Oct. 15, 1998, is celebrating its 20th anniversary on Monday.

As the world-renown property celebrates itsbirthday, here are 20 things you may not know about the Bellagio.

The Bellagio was extremely expensive to build.

At its opening, the $1.6 billion Bellagio was the most expensive hotel ever built. 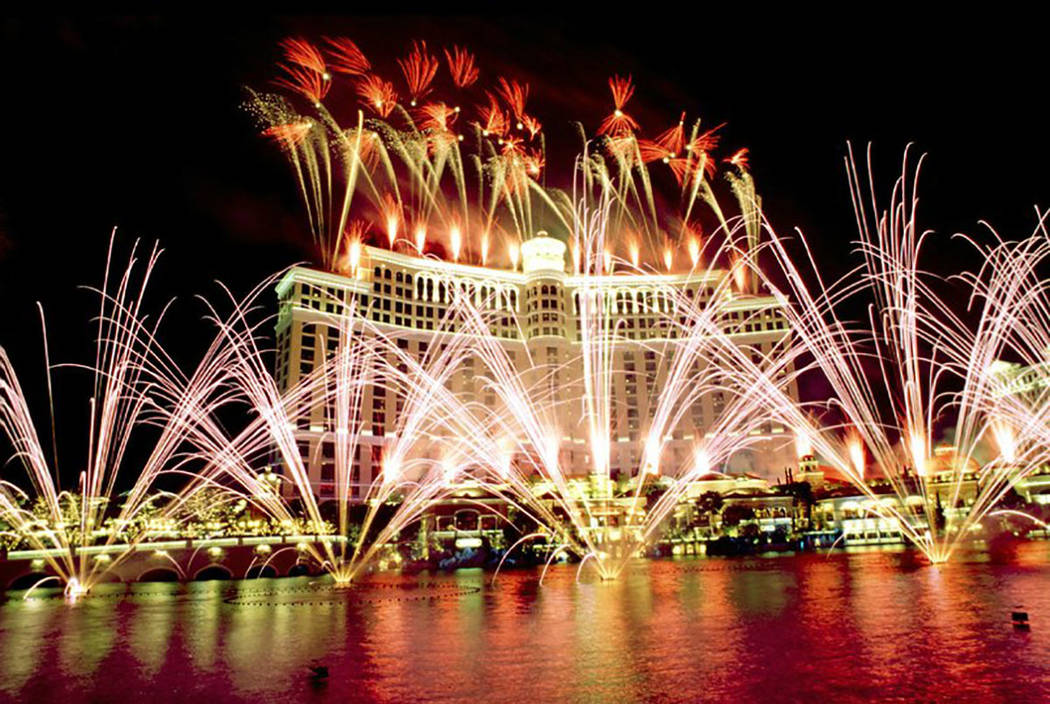 Steve Wynn was instrumental in the opening of the Bellagio.

The Bellagio was conceived and built by Steve Wynn and later bought by MGM Resorts International.

Bellagio has an herb garden growing on its roof.

If you look beyond the exterior of the Bellagio, you’ll notice a patch of green flourishing on the resort’s rooftop. Bellagio has an herb garden on his roof, which provides fresh herbs to some of the restaurants on the property.

Guests can experience what it’s like to start the Fountains of Bellagio — for a price.

For a whopping $250,000, guests can be in control of the Bellagio fountains. Hyde Nightclub will allow you to choose from the 35 fountain shows offered and push the button to actually start the show. The experience also comes with a 30-liter bottle of Ace of Spades Champagne, the equivalent of 40 traditional bottles.

Ready to go all-in on a game of high-stakes poker?

The Bellagio is home to Bobby’s Room, one of the most exclusive poker rooms. It’s is named after Bobby Baldwin, the 1978 World Series of Poker Champion and president and CEO of MGM Resort’s CityCenter. In order to play a hand there, you’ll have to pony up a minimum $20,000 buy-in.

Want to work on the Fountains of Bellagio? Make sure you’re dive certified.

The 30-person team of engineers, mechanics and pool specialists who keep the world-famous attraction running are all dive certified. 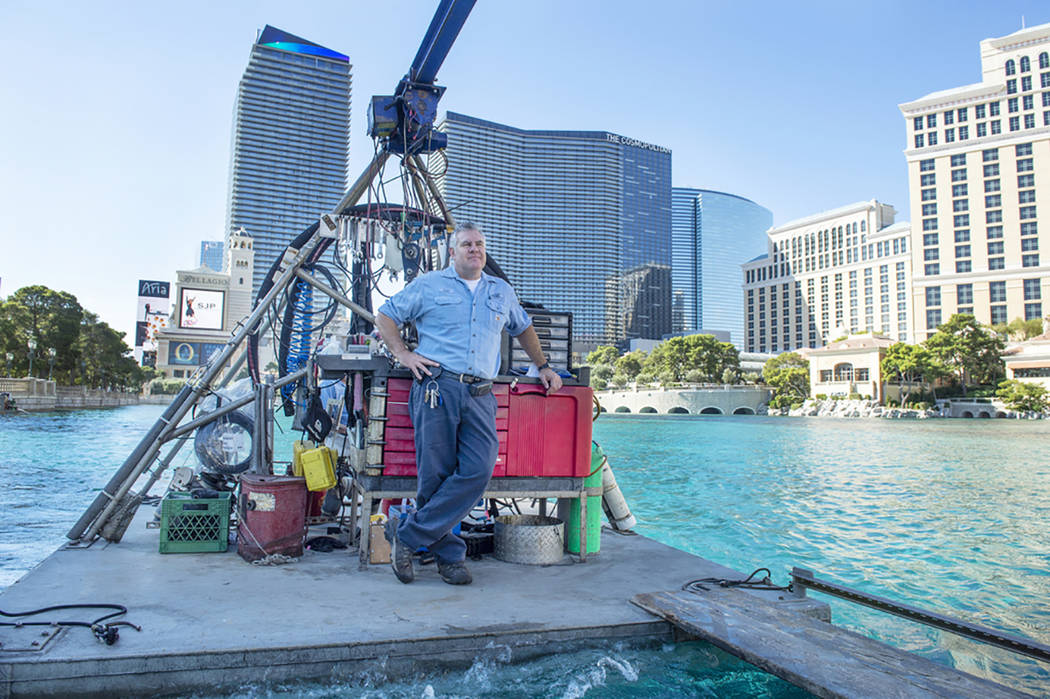 Bellagio’s Picasso restaurant does more than just bear the name of the famous painter.

Bellagio’s Picasso restaurant, which has two prestigious Michelin stars, not only pays homage to the famous painter with its name, but it is also home to 22 original Picasso paintings.

Some of Bellagio’s key features also were replicated elsewhere.

Wynn Macau and Wynn Palace resorts in Macau have lakes with fountain shows. Steve Wynn also developed a production show, “Le Reve,” at Wynn Las Vegas, with characteristics similar to those of “O.”

Employees at the Bellagio stick around for a while.

Two thousand current employees have been at the property since the day it opened.

The Bellagio has gone Hollywood.

The then-relatively new Bellagio was introduced to the world when George Clooney and Brad Pitt’s “Oceans Eleven” hit theaters on Dec. 7, 2001. Since then, the iconic property has been the backdrop of various music videos, commercials and a concert for the NHL Stanley Cup. 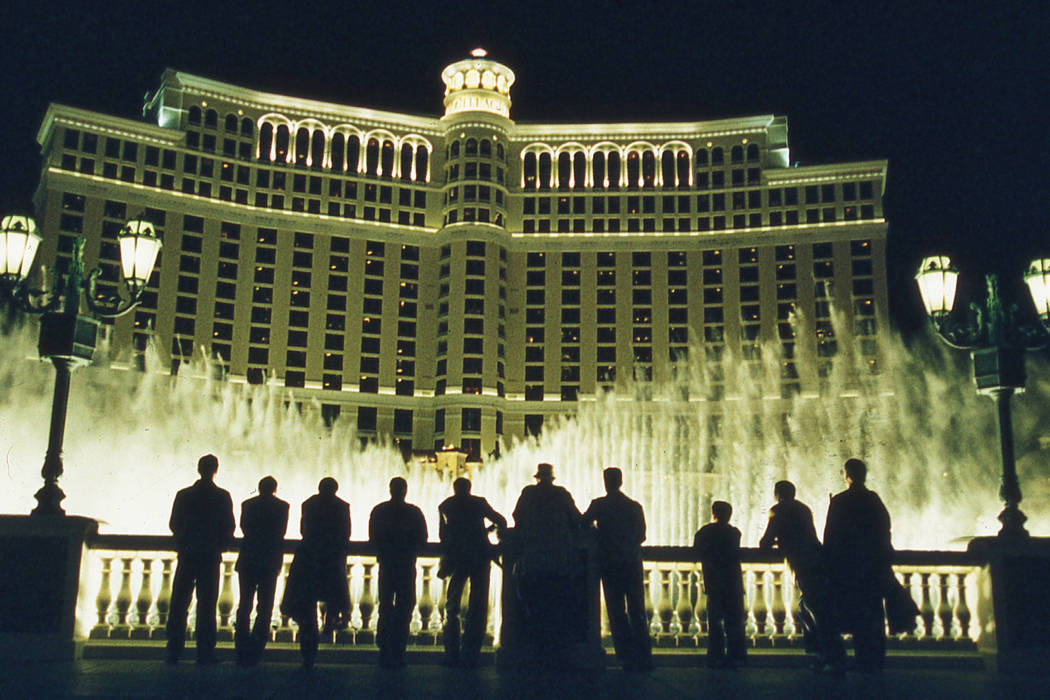 You may recognize some Olympians in the cast of Cirque Du Soleil’s “O” at the Bellagio.

Among the 77 performers in “O” — who hail from 22 countries — are nine Olympic athletes.

Looking for an Instagram-worthy picture on the Strip? The Fountains of Bellagio are photographed quite a bit.

Steve Wynn’s vision resulted in some iconic landmarks — most notably the famed Fountains of Bellagio, which routinely rank high on lists of “Most Photographed Places in the U.S.”

You can enjoy dinner with a view.

From Lago by Julian Serrano to Wolfgang Puck’s Spago, which moved from its original home at Caesars Palace to the Bellagio in May, visitors hoping for a dinner with a view can enjoy their meals while taking in pristine views of the world-famous Fountains of Bellagio show. 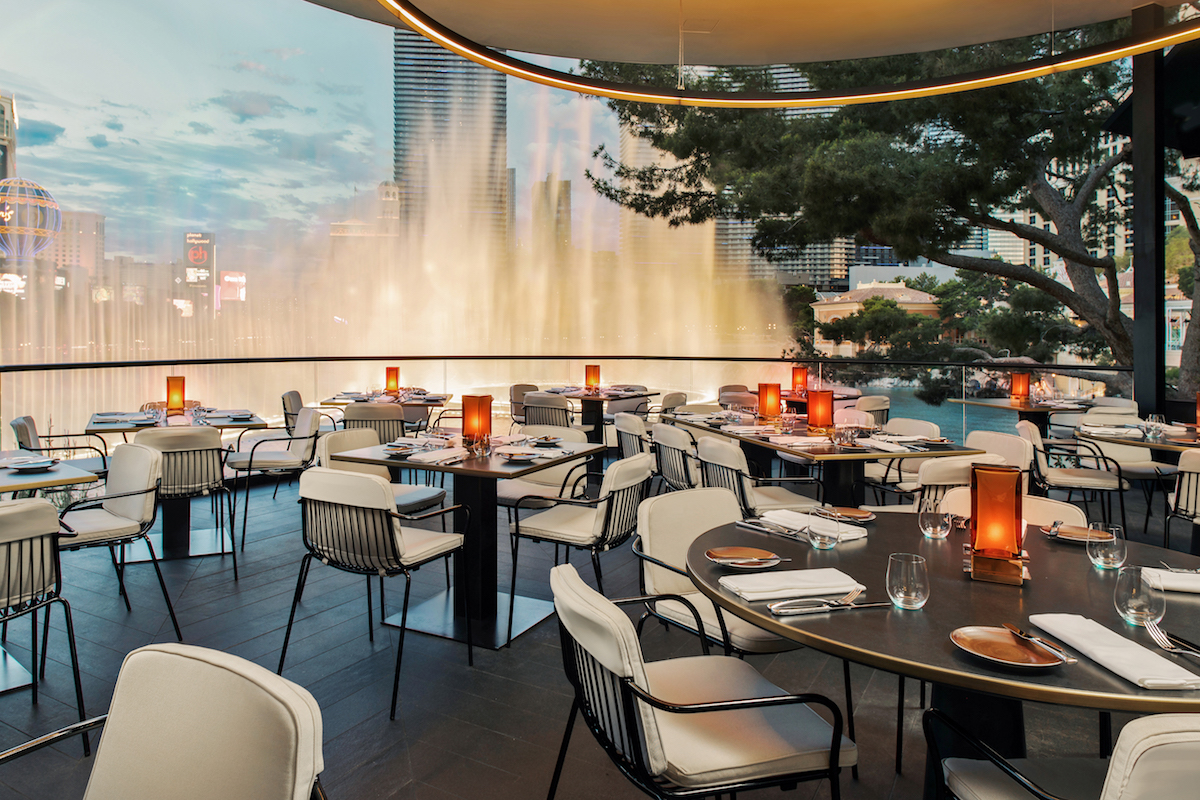 Traveling abroad? You may see another Bellagio property.

MGM now is taking the Bellagio overseas, opening the nongaming Bellagio Shanghai in China earlier this year and planning to open a Bellagio-branded property in Dubai in 2021.

There’s something for everyone at the Bellagio.

From fine dining to fine art, visitors at the Bellagio have ample ways to keep busy at the sprawling property. Those looking to shop till they drop can do so without having to leave the resort. And, collectively the Bellagio stores have one of the highest sales rates per square foot of any retail space in the country, according to Farid Matraki, senior vice president, global retail leasing and development, for MGM Resorts.

You can tie the knot in a venue overlooking the Fountains of Bellagio.

Looking for a romantic wedding venue? One of the Bellagio’s most popular wedding spots is Terrazza di Sogno overlooking the fountains, which are coordinated to start with the couple’s first kiss.

Bellagio’s nearly 14,000-square-foot Conservatory and Botanical Gardens welcome an impressive 20,000 guests each day. During Christmas time, however, the attraction welcomes 30,000 people per day.

It takes an army — and millions of plants — to bring to life the Bellagio Conservatory’s floral displays.

In order to construct the displays the Bellagio Conservatory has hosted over the past 20 years, the attraction is staffed by a team of 125 people who work 24 hours a day, six days a week, to change out the arrangements. Likewise, the conservatory has used 6 million plants on the 100 different displays it has created since its opening. 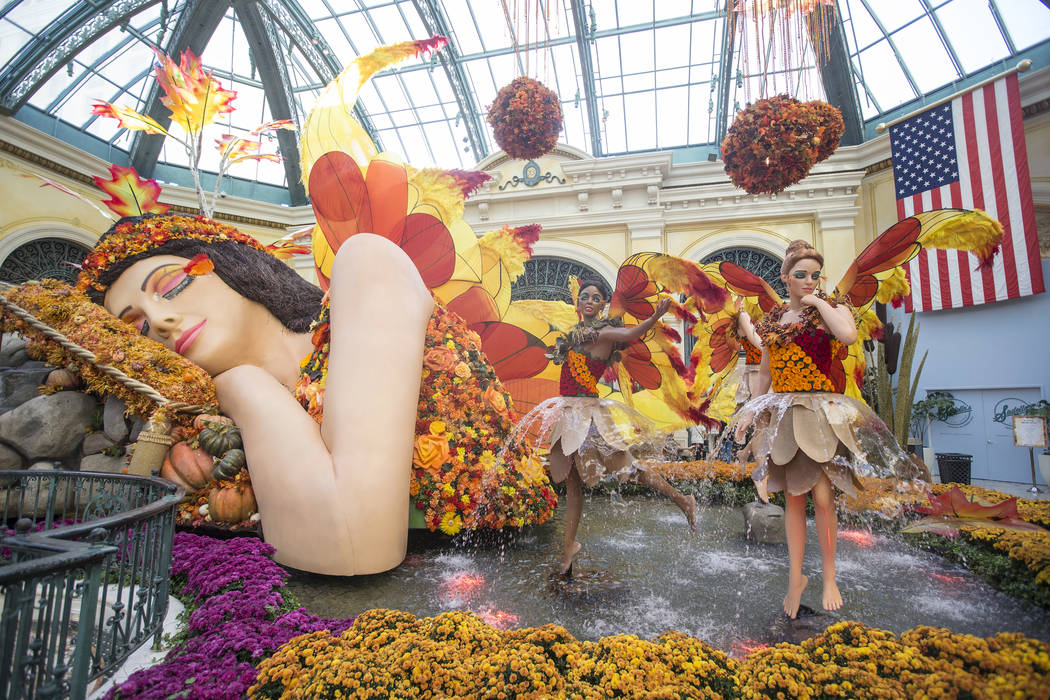 The Bellagio’s lake once appeared to turn pink.

Not only have people taken jet skis for a spin on the lake — Bruno Mars, Sir Richard Branson — but the water also once appeared to have turned pink. The lights in the Fountains of Bellagio turned pink in 2004 for an appearance by Victoria’s Secret “Angels” Heidi Klum, Tyra Banks, Gisele Bundchen, Adriana Lima and Alessandra Ambrosio.

Bellagio pastry chefs are known to create life-size sculptures out of chocolate.

A team of two pastry chefs at the Patisserie at Bellagio in April celebrated the Golden Knights impressive run to the Stanley Cup playoffs by creating a life-size sculpture of the team’s goalie, Marc-Andre Fleury. They didn’t stop there. In celebration of the 20th anniversary of Cirque’s “O” at the property, the team brought to life the show’s iconic promotion poster.