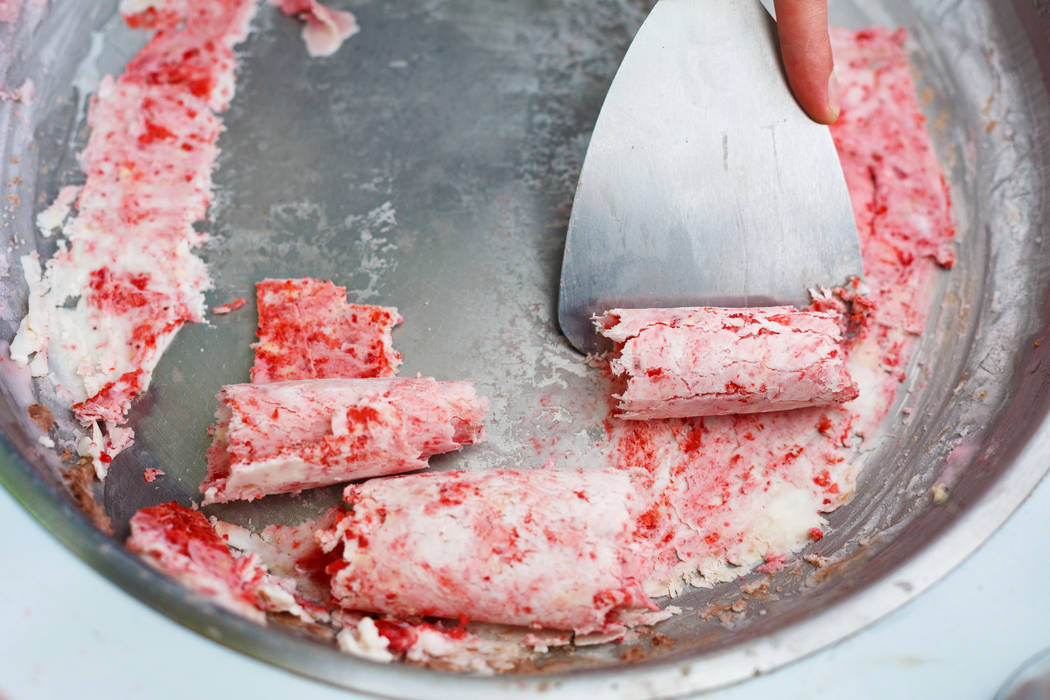 Celebrate National Ice Cream Day on Sunday with 10 of the most interesting styles of ice cream available in the Las Vegas Valley.

Amorino Gelato al Naturale: A rose by any other name may or may not smell as sweet, but it probably wouldn’t taste as good as this one.

This edible rose from Amorino Gelato al Naturale was crafted by hand from raspberry, blood orange and orange-ginger gelatos; other flavors are available. It’s $5.50 for a small, $6.25 for a medium. See more.

Black Tap Craft Burgers & Beer at The Venetian: Crazy Shakes are injected with an element of shock and awe. They go not only outside the box but outside the glass, the top half of which is smeared with something sticky and embedded with something sweet. Crazy Shakes come topped with cookie ice-cream sandwiches, a Pop Tart or a slice of cake — or a brownie, in the over-the-top chocolate of the Brooklyn Blackout, which has a rim of chocolate and chocolate chips. See more.

Fiddlestix: It’s big. It’s boozy. And there’s enough of it for you and your seven closest friends.

The 8 Man Milkshake at Gold Spike’s Fiddlestix restaurant is the shareable version of the six “boozy milkshakes” also offered on the menu. Fiddlestix at Gold Spike is also the home of the Unicorn Grilled Cheese secret menu item. See more.

Rolled Ice Cream: Rolled Ice Cream starts with creamy liquid base to make their ice cream. The cream is poured onto a frozen metal surface and customers select the flavors that they want mixed in. Then the ice cream is smoothed out and rolled into tight spirals.

Scotch 80 Prime at The Palms: The Palms’ new steakhouse Scotch 80 Prime serves a banana split that’s created with fire and liquid nitrogen — right at your table.The Tableside Fire & Ice Banana Split starts with a sliced banana that is sugared and flambeed with a torch. Then, ice cream is mixed table side and made frozen with liquid nitrogen. Once assembled, the banana split is served with an artist’s palette of toppings including candies, nuts and fruit. See more.

STK Las Vegas at The Cosmopolitan: This flaming cotton candy dessert hides a strawberry shortcake underneath. After the cloud of cotton candy is set on fire, it melts to reveal a dessert made with strawberry ice cream, fresh strawberries, cake bites and whipped cream.

Sweetspot Nitrogen Ice Cream & Boba Tea: Sweetspot’s specialty is made-to-order ice cream. Customers select a base, either premium (milk) or sorbet (water), then pay for a cup size of their choosing. Then comes the fun part: picking flavors and toppings.

The liquid nitrogen is the last step. As it’s poured into the concoction, it produces a vapor cloud and creates the dessert in seconds. See more.