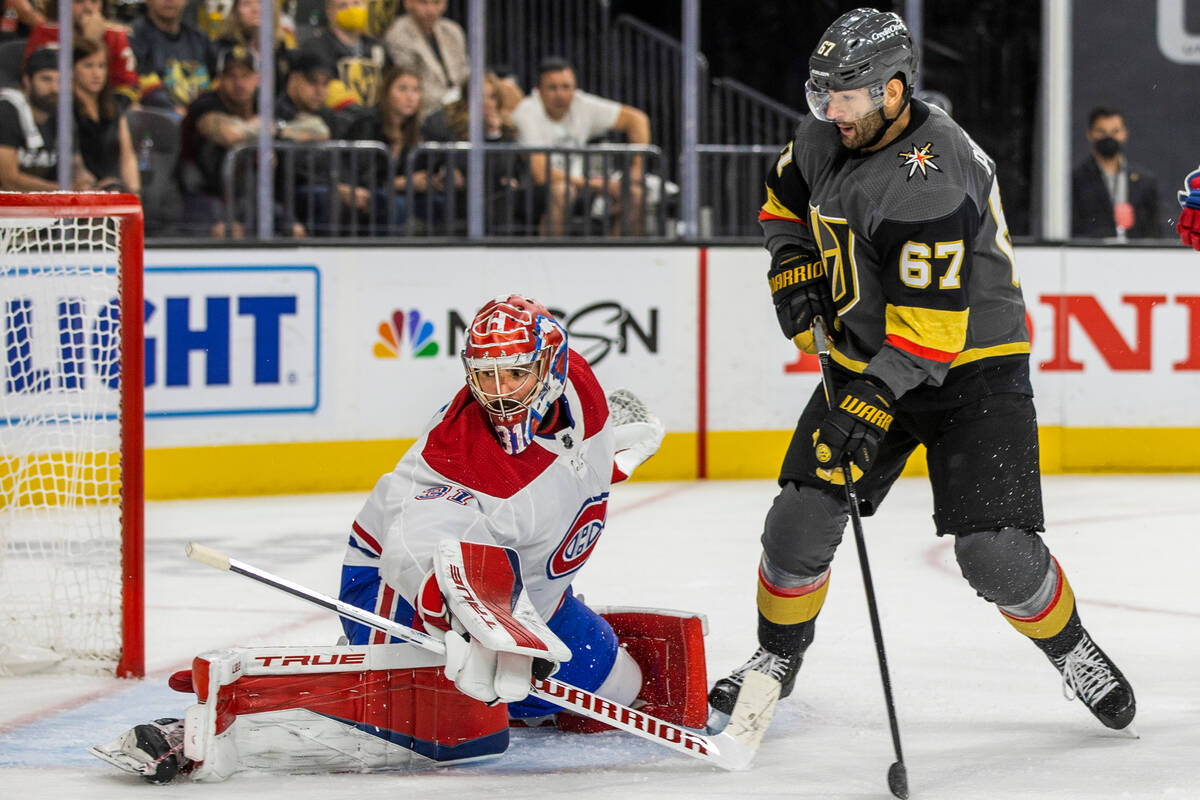 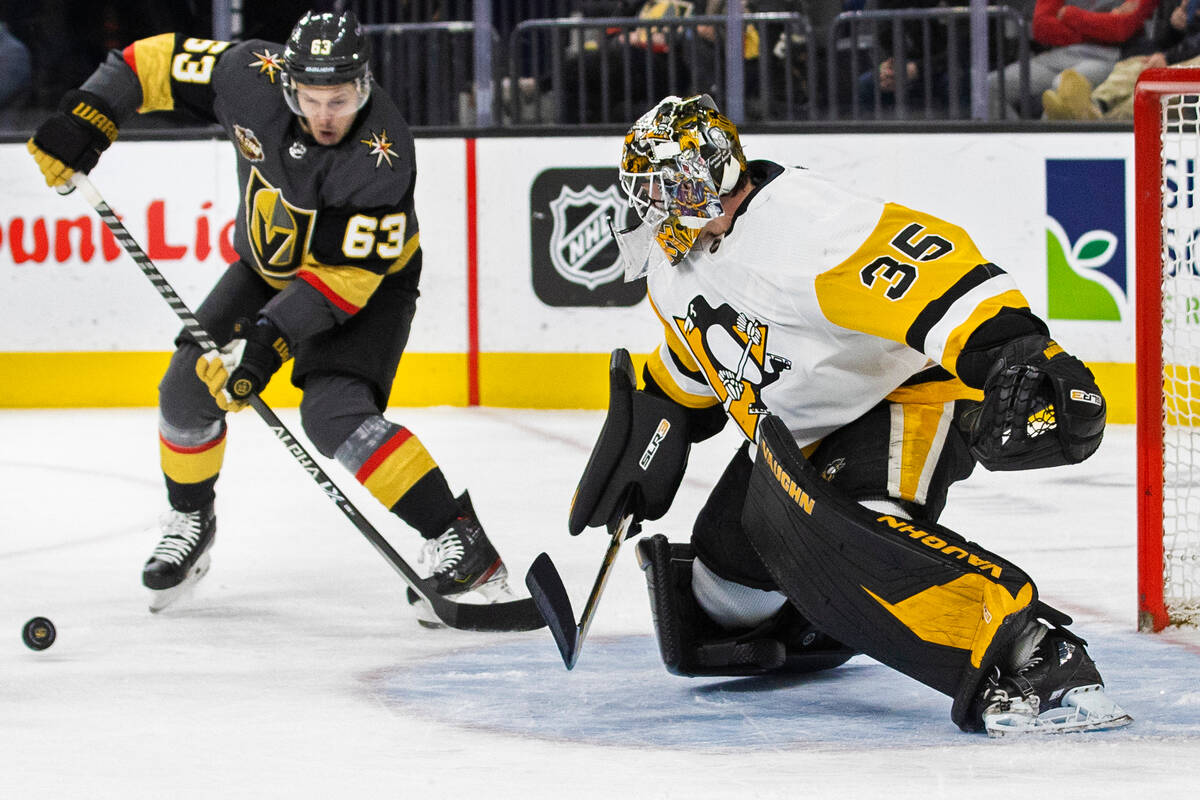 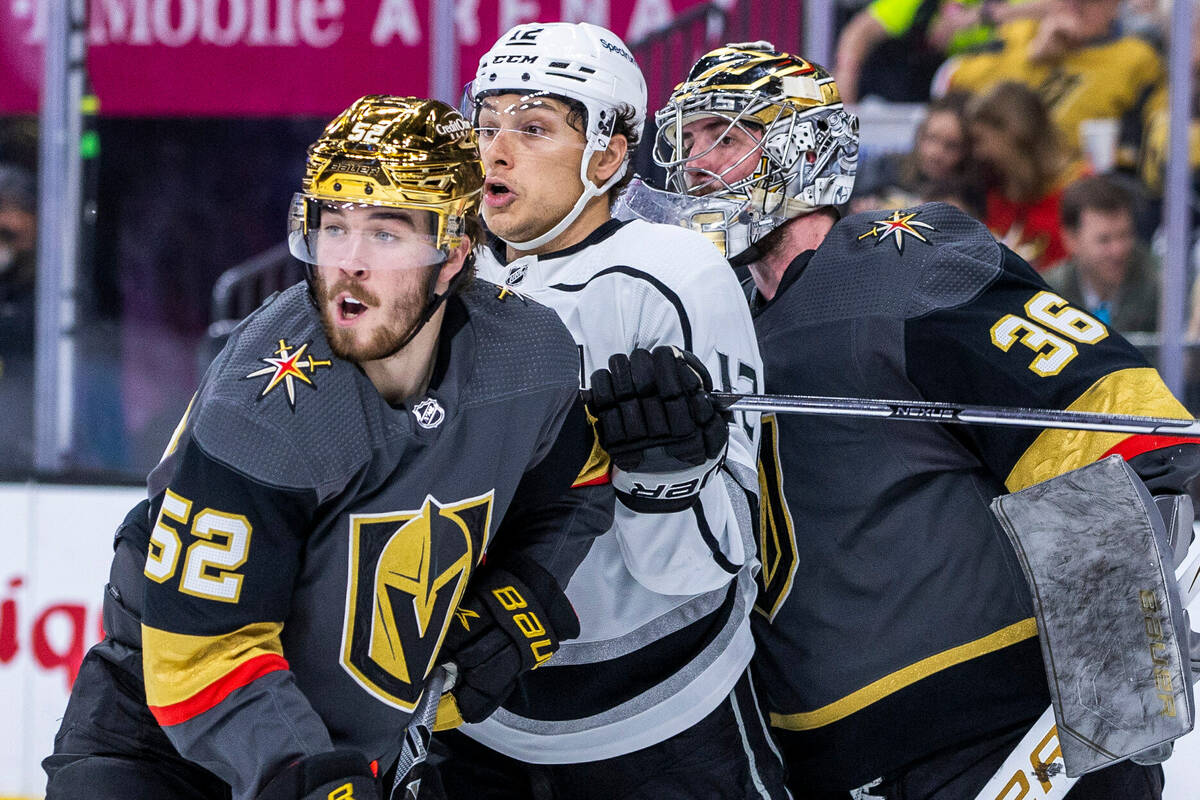 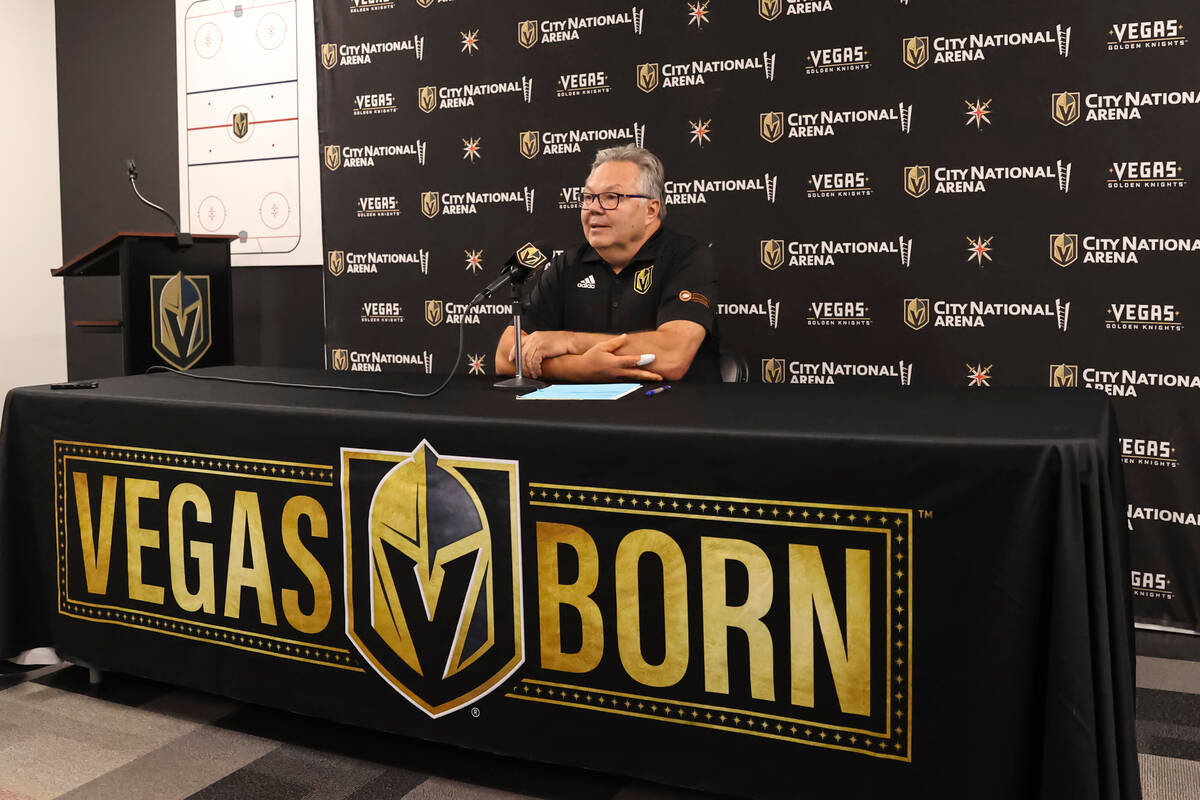 The Golden Knights’ offseasons are never about only adding or subtracting. Their aggressive nature and constant flirting with salary cap’s limits force them to often do both at the same time.

The Knights made the dance look easy their first four seasons with four playoff appearances, three trips to the semifinals and one appearance in the Stanley Cup Final. Things have become more dicey lately.

The NHL’s salary cap limit stayed flat at $81.5 million the last three seasons and increased only slightly to $82.5 million this offseason. That’s made it more difficult to move money off the books, hurting what the Knights could get back for veteran players when they’ve needed to accommodate the salaries of additions like defenseman Alex Pietrangelo and center Jack Eichel.

“The flat cap just continues to tighten on teams because it hasn’t changed and yet as young players across the league are paid and get more money it just pulls a little bit more out, a little bit more out,” general manager Kelly McCrimmon said after trading Pacioretty and Coghlan. “It makes it that much tougher.”

The Knights missed the playoffs after making subtractions last offseason and had to do the same thing this summer while bringing in minimal external help. They’ll have to hope the roster they’ve built is strong enough to withstand the losses they’ve sustained.

They’ve been in similar situations before. Here’s the Knights’ history of cap-clearing moves, and how they look so far:

Haula was a savvy expansion-draft pickup by the Knights and trading him before the final year of his contract ($2.75 million cap hit) June 29, 2019, to Carolina proved wise as well.

That’s because the team got back Roy, who has 64 points in 156 games the last three years as a cheap, young contributor. The 25-year-old scored a career-high 39 points in 78 games last season.

Haula scored 22 points in 41 games for the Hurricanes before being traded to Florida. He spent the 2021 season in Nashville and was productive for Boston last year before being dealt again to New Jersey this offseason.

The Knights executed another sharp deal one day after trading Haula by moving Miller for a second- and fifth-round pick.

It cleared $3.75 million of cap space each of the next three years and left an opening for a young defenseman on the roster. That spot was filled by Hague, who made his NHL debut the second game of the 2019-20 season, and then by Zach Whitecloud, who was a regular by the playoffs.

This was a subtle but important trade for the Knights.

They gave up the final year of Clarkson’s contract, which was on long-term injured reserve with a $5.25 million cap hit, and a fourth-round pick for goaltender Garret Sparks on July 23, 2019. The Knights got one game out of Sparks, but the real benefit was operating outside of long-term injured reserve, which allowed them to accrue cap space throughout the season.

That gave them enough flexibility to add Martinez, goaltender Robin Lehner and forward Nick Cousins before the 2020 deadline.

The Knights traded Eakin and his expiring contract to Winnipeg on Feb. 21, 2020, for a fourth-round pick.

The move happened one day after the team acquired Martinez and three days before the trade deadline, setting up later moves for Lehner and Cousins. It also gave Roy more playing time.

Eakin had five points in eight games for Winnipeg, but the Jets were eliminated in the play-in round in the bubble.

The Knights used the fourth-round pick in a small move-up for forward prospect Jakub Brabenec in the 2021 draft.

Veteran center Stastny was one of two cap casualties by the Knights after they opted to pursue Pietrangelo in free agency.

Stastny was sent to Winnipeg for the final year of his contract ($6.5 million cap hit) Oct. 9, 2020, for a fourth-round pick and defenseman Carl Dahlstrom. He showed he was still productive, scoring 29 points in 56 games for the Jets before re-signing and getting another 45 in 71 games this past season. He’s currently a free agent.

Dahlstrom didn’t play an NHL game for the Knights, but they still got value from the trade. The fourth-round pick gave them Howden, who had 20 points in 47 games last season.

Moving Stastny also allowed center Chandler Stephenson, who scored 99 points in 130 games the past two seasons, to be a permanent part of the top six.

Gusev joined the Knights after a promising campaign in Russia and was moved before playing an NHL game.

It was a surprise, but the team determined it couldn’t afford the two-year, $9 million contract the forward ultimately signed with the Devils. The Knights got a second- and third-round pick for Gusev’s rights July 29, 2019.

No NHL help has come from the trade yet, but the early returns look strong. The picks turned into defense prospects Lukas Cormier and Daniil Chayka, two of the organization’s best, and forward prospect Jakub Demek.

Gusev scored 49 points in 86 games for the Devils while showing defensive warts. He left the NHL this past season to return to Russia’s Kontinental Hockey League.

Trading a fan favorite like Schmidt for a third-round pick Oct. 12, 2020, seemed shocking at the time.

He was one of the Knights’ top-two defensemen their first three seasons and under contract an additional five. It hurt to part ways to land a new top blue liner in Pietrangelo.

Schmidt, however, hasn’t been the same away from the Knights. He had 15 points in 54 games for Vancouver in 2021. He was traded again last offseason for a third-round pick, this time to Winnipeg, where he scored 32 points in 77 games. Schmidt had 97 points in 196 games with the Knights.

All in all, the team traded Schmidt and Stastny (combined $12.45 million cap hit) and gave their roles to Pietrangelo and Stephenson ($11.55 million). Plus the Knights got the draft picks to acquire Howden (from Stastny) and Dadonov (from Schmidt).

Eye of the beholder

Reaves is a unique player, which makes evaluating this tricky.

On one hand, the Knights last summer got a third-round pick (which turned into forward prospect Jordan Gustafson) and $1.75 million in cap relief for a player who was a healthy scratch for parts of the 2021 playoffs. Reaves went on to score 13 points in 69 games for the New York Rangers and none in 18 playoff games.

On the other, the beloved bruiser was missed. Multiple Knights players talked about lacking physicality compared to years past during their May exit interviews.

What that’s worth is hard to say. Gustafson would tip the scales if he becomes an NHL player.

No return was likely going to satisfy many Knights fans in exchange for moving Fleury, who McCrimmon called the “most popular player I’ve ever seen in sports.”

That the team got back only forward Mikael Hakkarainen, who never played a game for the organization, didn’t help matters, even if it did open up $7 million of cap space.

Fleury, the 2021 Vezina Trophy winner, didn’t have a banner year by his standards with a 28-23-5 record across 46 starts for Chicago and Minnesota. The Blackhawks did get the 57th overall pick this summer from the Wild, used to take center Ryan Greene, for moving Fleury at the trade deadline and retaining half of his salary.

The Knights, meanwhile, took a step back without Fleury in net. They fell from second in team save percentage in 2021 to 20th last season with Lehner, Laurent Brossoit and Logan Thompson.

The Knights trading Dadonov on June 16, the same day they introduced new coach Bruce Cassidy, was unsurprising. They already tried to do so once before at the deadline before the deal got voided.

The Canadiens took on the final year of Dadonov’s contract with a $5 million cap hit and sent back the contract of defenseman Shea Weber, who will remain on long-term injured reserve. That leaves the Knights not only without one of their three 20-goal scorers from last season but limits their financial flexibility through the remaining four years of Weber’s deal.

It’s a difficult price to pay when they traded defenseman Nick Holden and a third-round pick a year ago to get Dadonov.

The team’s most recent cap-saving move sent Pacioretty and Coghlan to the Hurricanes on July 13 for future considerations.

That means the main benefit to the Knights was carving out enough space to get the rest of their offseason business done. Losing Coghlan will also likely allow the team to carry seven defensemen to start the season, opening up some roster flexibility.

Not having Pacioretty, who scored 97 goals in 224 games with the Knights, will hurt after they gave up center Nick Suzuki, left wing Tomas Tatar and a second-round pick to acquire him Sept. 10, 2018. Coghlan provided help as well with 19 points in 88 games the previous two seasons. 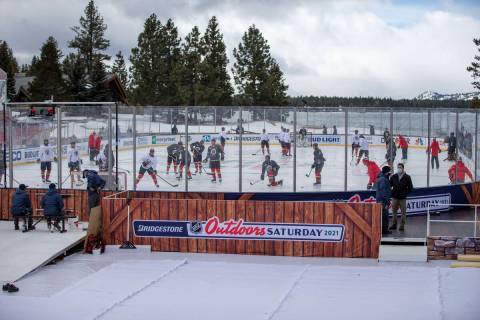 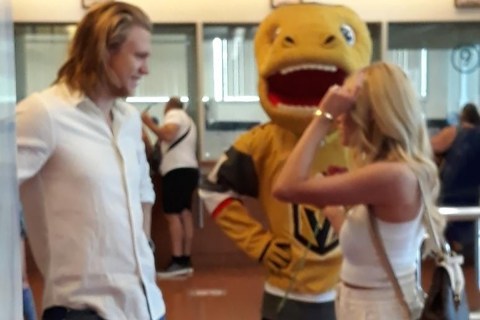 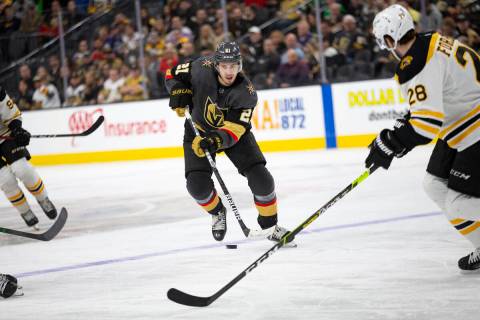